Around about 1929, a German architect by the name of Herman Sörgel came with an idea he called Atlantropa. The idea was simple (no, not really) - he was going to create a new utopian continent out of Europe and Africa by building hydroelectric dams in the Strait of Gibraltar and Dardanelles and the mouth of the River Congo. This would allow the lowering of the level of the Mediterranean Sea, to create more habitable (and farmable) land, the irrigation of the Sahara Desert, and the generation of all the electricity the new continent of Atlantropa or Eurafrika could ever need. The idea was based on his desire for a massive, peaceful project that could bring the warring European nations together and which would improve the lives of millions.

Strangely enough, the idea was not pursued seriously other than by Sörgel and a handful of others. Perhaps the idea can be used to fuel a modern "fantasy" campaign, though. 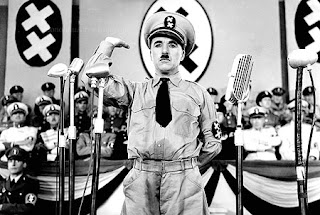 The Eurafrika Attacks campaign is going to take Herman's idea and mess with it a bit. First, we're going to move the idea back to the dark days of the First World War, and give Europe a running start at the project. For our purposes, by 1927 or so the project is complete and Europe is seriously deep in debt. Weimer Republic-style deep in debt. This facilitates the rise of a pseudo-fascist dictator called Hynkel, who now has the power of Europe and Africa at his disposal and uses it to start the Second World War in 1930.

Eurafrikan forces quickly move into the Middle East and Ukraine, and soon they convince a China desirous of revenge against colonial powers to join them. Thus, we get a WW2 with an axis composed of Eurafrika and China against the allied powers of the United Kingdom (who never quite joined the Eurafrikan cause, though a faction of the country is heavily invested in the project and desires Hynkel's success), the Soviet Union and Japan, with the United States practicing semi-neutrality until submarine attacks on its shipping draw it into the war in 1934.

So what's the point of this campaign, other than novelty. Well, novelty is probably the main point - a sort of mixed up WW2 that occurs years before it is supposed to and without some of the more disturbing elements of that war.

The real hook, of course, is the use of a bunch of interesting military equipment from the "interwar" period in a hot war. Between the Spad and Spitfires in the 1920s and early 1930s there were all sorts of interesting aircraft, ships and land vehicles designed and constructed, but never really used. Now some of these vehicles have a chance to show what they were made of, and at the same time a few anachronisms might make their way into this WW2, especially cavalry.

A campaign could be organized around a particular military unit and its march into Eurafrikan territory, modeled on the film The Big Red One (1980) starring Lee Marvin and Mark Hamill, which followed a group of soldiers in the U.S. 1st Infantry Division from North Africa to Sicily to Normandy and eventually to the liberation of a concentration camp. A fictional campaign might move through Baghdad to the Balkans and Carpathians and finally into the heart of Europe.

There is also room for espionage in London, Paris, New York and Cairo, jungle fighting in the Congo basin, the Soviet couteroffensive against re-invigorated China in Mongolia, resistance movements in Europe, anti-colonial movements in Africa, or the defense of Japan against a new wave of seaborne invasions from China (will the "divine wind" protect the island nation again?). You can also play on the new geography of the Mediterranean and Sahara, tying in with notions of Atlantis buried beneath the sands of the Sahara being rediscovered, or pre-human settlements that were hidden under the Mediterranean being revealed.

The campaign offers many opportunities for realistic and supernatural gameplay in a period often forgotten due to its being sandwiched betwen the Roaring 20's and the Second World War.