Some Holiday Magic for the Season 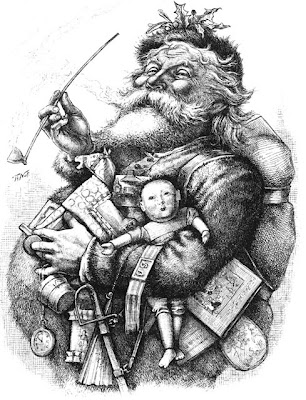 Here's a little preview of an article appearing in NOD #6 (any time now - almost there).

Bag of Goodies
The bag of goodies works in much the same manner as a bag of tricks, save instead of producing small animals (other than kittens and puppies), it produces small, simple toys. The prospective recipient of a gift must reach into the bag while making a wish, pulling out either a small toy made of wood or tin or, if they are chaotic or evil, a lump of coal. Wishes for swords will produce wooden swords, which can be used as clubs in combat. The bag operates once per year per person.

Chimney Charm (Spell, MU Level 2)
By touching one’s finger to one’s nose (but not placing it inside – different charm), they ascend through any chimney-like tube or hole, regardless of size and unharmed no matter what other material (smoke, water, acid) might be coursing through said concourse.

Dreidel of Fortune
This clay top can only be made by a lawful cleric of at least 3rd level. The dreidel is inscribed with the glyphs that mean “Nothing”, “Half”, “All” and “Put In”. When a gold piece is offered (it disappears when the top is spun) and the top is spun while chanting a charming ditty, the dreidel has the following effects (roll 1d4):

And a petty god for the season ...

Saint Nick (Demigod)
Saint Nick is the fey demigod of just desserts. He appears as a jolly gnome, dwarf or human (as he chooses) with white hair, a long white mustache and beard, a large, red nose and twinkling eyes, dressed in red robes and wearing a pointed red cap. Saint Nick carries a large, green bag from which he can pull any desire of a good creature who petitions him with a sacrifice of milk and cookies (per limited wish), but for wicked creatures he instead pulls out a large whipping stick and beats them to within an inch of their life (i.e. 1 hit point). Saint Nick is as strong as a frost giant and as nimble as a sprite. He can use the following spells at will: Animal Summoning (8 reindeer), Charm Monster, Chimney Charm, Detect Evil, ESP, Know Alignment, Magic Snow Ball and Uncontrollable Laughter.

Saint Nick’s clerics dress like their patron, with red robes over their armor and a whipping stick at the ready. They can learn the spells Chimney Charm and Magic Snow Ball when they learn to cast cleric spells of the equivalent level. Saint Nick’s clerics must pass on 50% of all treasure they collect to the poor and needy. At 9th level, they build fortified orphanages and hospices, conducting waifs and the sick from cities via caravan to their palaces of generosity.
Posted by John Matthew Stater at 1:14 PM