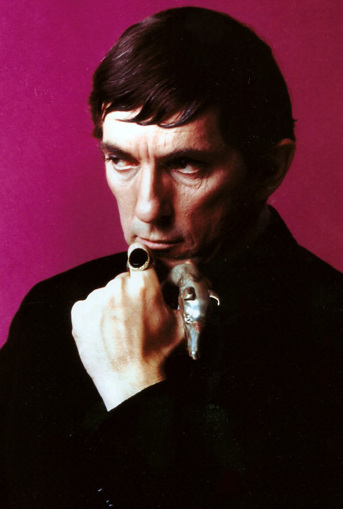 Over the past few months my wife and I have been watching Dark Shadows, the 1960's gothic horror soap opera that eventually revolved around Barnabas Collins, a vampire from the coast of Maine. My wife and her friend got into Dark Shadows years ago when they were first released on video cassette and then DVD. I'm a newcomer to the saga, and, given my retro proclivities and love of quality cheese, I'm completely hooked.

For the old school RPG enthusiast, Dark Shadows is a pretty good fit. For starters, it has production values that are on par with our beloved LBB's. Lines are forgotten, mike booms and cameras sometimes get into shots and impenetrable brick walls often shudder when touched. Re-shooting scenes was an expense the producers were not able or willing to incur, but I'm a firm believer that bad special effects do not ruin good stories. Dark Shadows is a cracking good story.

Most DVD collections ignore the early episodes in favor of the episodes that introduced Barnabas, who became the break-out hit of the series. The story begins with Victoria Winters taking a job as a tutor with the Collins family. The Collins family is suitably Gothic and weird.  The grand dame is Elizabeth Collins Stoddard, who hasn't left the family home in over a decade - and nobody knows why. Well, nobody except one Jason McGuire, who knows precisely why and is blackmailing Elizabeth as a result. McGuire, as played by Dennis Patrick, is so slimy I found myself dreading his arrival as much as the characters - and praying for his violent downfall as much as his victims as well. Elizabeth's brother is Roger Collins, an alcoholic single father who was apparently married to a phoenix - i.e. his wife left him and then returned and revealed she was really a mythological creature who catches fire and burns. Weird. Roger's son is David, a precocious boy (they always are in the 1960's) who claims that the ghost of Josette Collins still haunts the old house on the estate (she does - for a while, at least, until a new ghost shows up). Elizabeth has a swinging daughter named Carolyn who hates Jason McGuire enough to take up with the world's goofiest hippy biker just to piss off mom. Jason's comrade in villainy is one Willy Loomis, who thinks he has discovered that the Collins family jewels are sealed in a crypt on Eagle Hill Cemetery, only to find out that something terrible is hidden within (I'm sure plenty of RPG tomb robbers can relate).

Barnabas, when he finally arrives, proves the maxim that you can't judge a production by its budget. The storylines with him are often very creepy. His big goal, early on, is to be re-united with Josette, the woman he loved back in 1795. I won't go into the details, but the storyline is well written and often well played and is disturbing even if you ignore the fact that Barnabas is a vampire. This is something for RPG referees to think about. Don't let your villains be villains because of the special abilities written next to their names. Make them villainous because of what they do, not because of what they can do.

Eventually, Dr. Julia Hoffman arrives on the scene and adds a new dimension in villainy. She sees curing Barnabas of his vampirism as a way to establish herself as a medical genius, and pursues this with an amoral zeal that eventually catches up to her. Another good template for a villain in RPG's - the amoral enabler whose agenda complicates the lives of the protagonists.

I highly suggest that folks with a Netflix account or some other way to access the series give it a try. Don't be put off by the production values - as with the LBB's, there's some real treasure buried beneath the modest facade.
Posted by John Matthew Stater at 11:51 AM