The internet is wonderful for stream of consciousness discovery. Last night, I was writing a bit about orcs for Blood & Treasure - specifically creating a table of military units - and in the process found a reference to the very interesting mythology created by William Blake in the last decades of the 18th century. Just like that, I had the perfect pantheon for Dweomer Bay, Nod's nod to Colonial America.

If you don't know about this little gem of creativity (I'm not going to pass judgment on is validity), I'll do my best to present the basics, which, frankly, is all you really need for a fantasy RPG that has warrior-priests who mostly concern  themselves with exploring dungeons. If you're looking for a stand-in for Christianity, it should work rather well.

In essence, Blake's mythology would be one in which Chaos (or Chaotic Good, in 9-fold alignment terms) is "good", and Law (or Lawful Neutral) is "not good". It has a central figure, the giant/man/land of Albion, who is divided into four Zoas: 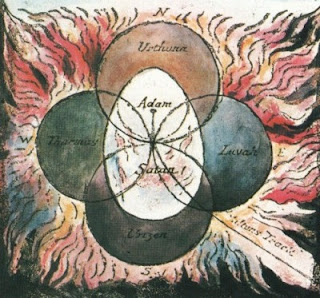 Tharmas: Tharmas is the primordial man, who represents instinct and strength. If I had to choose an alignment, I'd go Neutral.

Urizen: Urizen is reason and tradition; a cruel god of Law. Probably Lawful Neutral. He was the primeval priest, who separated from the other Eternals to build his own alienating and enslaving realm of religious dogma - a fallen universe - in which Los and Enitharmon enter to give birth to their son, Luvah/Orc, the spirit of revolution and freedom.

Urthona (Los): Urthona is also known as Los, and represents inspiration and imagination. This guy is Chaotic Good. He is commonly depicted with a hammer, and is the father of Luvah/Orc. Urthona is the redeemer of the fallen universe created by the rebel Urizen. Los himself fell and took on human form, and then went to work binding Urizen to a human form, a "Human illusion, in darkness and deep clouds involvd".

Each of these four Zoas has a feminine "emanation":

Enion: Enion is maternal, and is paired with Tharmas.

Ahania: Ahania is celestial, and is paired with Urizen. She is discarded by Urizen.

Vala: Vala is seductive and shadowy, and is paired with Lovah/Orc. Her daughters are death and love human sacrifice, and must be confronted and defeated by Jerusalem to bring the Zoas back together as a single divine body.

Enitharmon: Enitharmon is musical, and is paired with Urthona/Los.

There are other "divinities" as well:

Rintrah represents "revolutionary wrath" (the fact that the American Revolution has an impact on Blake's mythology makes it perfect for Dweomer Bay). His brothers are Palamabron (pity), Bromion (scientific thought - also the passionate man) and Theotormon (desire/jealousy - also the chaste man). They are the sons of Los. Bromion is loud and lustful, and eventually rapes Oothoon (the soft spirit of America, or female sexuality), symbolizing an America trapped by the the science of Newton and the philosophy of Locke.


Urizen's sons are Thiriel (Air), Utha (Water), Grodna (Earth) and Fuzon (Fire). Fuzon rebels against Urizen, attacking him with fire and then declaring himself God. This leads to Urizen accidentally creating the tree of mystery and nailing Fuzon's body to it.