The Monsters of Henry Justice Ford - Part I

Henry Justice Ford, in case you, the reader, haven't heard the name, is one of the finest illustrators of fantasy and folklore to have ever come around the bend. Recently, Monster Brains did a very long post showcasing a ton of his work - I highly suggest taking a tour of the post and the site (one of my favorites).

Many of the works depict monsters that were new to me, either in the sense that I was unaware of the fairy tale in which they originated, or they were drawn in a way that sparked my imagination. I decided it might be fun to stat a few up for Blood & Treasure, and, if you continue reading, you will find that that is precisely what I've done.

By the by - I think the idea of a monster book divided up by great artists (in the public domain, of course) in the manner the old Deities & Demigods book was divided up by mythos, would be pretty cool, in case anyone wants to collaborate. 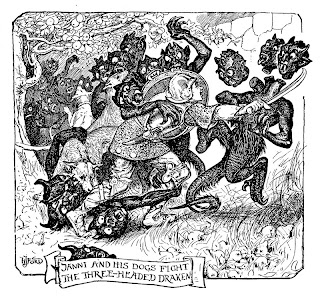 The three-headed draken are goblinoids with skin as black and as shiny as coal. They have feet tipped with cruel talons, mouths full of fangs, and generally lurk in ruins planted with fruit trees. They regard this fruit as a dragon regards its treasure, for the trees to which they are bound are the only ones from which they can draw sustenance. 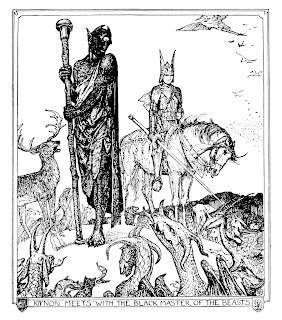 A black master of beasts is a fey guardian of a particular woodland, having the animals of that woodland under his protection. Black masters appear as black-skinned giants with single eyes in their heads and single legs to support them. They wield massive iron clubs and are capable of summoning 30 HD worth of animals, dragons and magical beasts common to their woodland (i.e. they show up on a random encounter chart) to their service once per day. These animals arrive in 1d4 rounds. 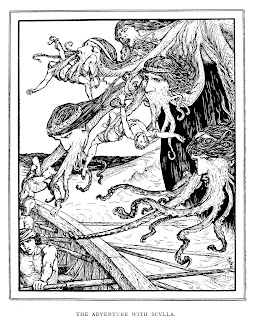 Scyllas are primordial sea monsters, terrible abominations that haunt narrow straits, lying in wait for prey. They have bodies shaped something like hydras, with scaled skin and five thick necks that end in massive humanoid heads. These heads have beards of tentacles, six tentacles each. Scyllas communicate telepathically, and they can induce fear (as the spell) once per day per head in creatures with 5 or fewer hit dice. If one head of the scylla is casting a spell, the others are still capable of attacking.