Laser Mage, Because Why Not? [New Class]

Sometimes, you need a weird class to shake things up. The laser mage is one of those classes that starts as a phrase that pops into your head, and then begins to take shape as you let your mind wander and explore. I saw a guy with a wand covered in crystals who could do interesting things with light – something like a combination of illusionist and evoker, but more focused. I pictured something of a magical duelist, a class for people who had played everything and were ready to figure out how to make something new work for them, or people who didn't want their class abilities to lock them into a particular role.

Laser mages are arcane wash-outs. They never quite got the hang of magic in general, but showed a weird interest in, and ability with, the light spell. Light is to the laser mage what read magic is to normal magic-users – the key spell without which they cannot operate. They know it so well, they can cast it from memory.

To produce multiple effects with this single spell, the laser mage needs a light projector. The projector looks like a rod or thick wand. It is a hollow metal tube about one foot long and tipped with a faceted rock crystal. The crystal is cut by the laser mage, so as they progress in level their skill as a gem cutter increases as well. They also learn how to use other translucent gemstones, faceted or curved, to increase the effectiveness of their spell, or produce additional effects.

Requirements
Intelligence and Dexterity of 13 or higher

A 1st level laser mage can cast the light spell at will. Casting this spell through his light projector is how he manifests all of his other abilities, not including his skill as a gem cutter and his ability to appraise the value and quality of precious stones.

The first thing a laser mage learns to do is project rays of light through the crystal at the end of his light projector. These rays have a range of 20’ and require a ranged attack roll to hit. The ray’s effect depends on the laser mage’s level and, of course, how intense they want it to be.

These improved rays, and the other special light effects gained by the laser mage are dependent on the laser mage improving the main gemstone in his light projector. This must be done at the following levels, with a gem of a stated value (or higher): 4th level, 100 gp, 6th level 500 gp, 8th level 1,000 gp, 10th level 2,500 gp and 12th level, 5,000 gp. The gem must be polished and cut by the laser mage himself, requiring a gem cutting task check (Reflex task, modified by dexterity, skilled).

At 3rd level, a laser mage can project a beam of light from the projector that can be used as a sword. The beam deals damage as the ray would, and requires a melee attack to hit.

By adding additional colored gemstones to the light projector, the laser mage can project 10’ cones that influence emotions (Will save to resist) as follows: Red gems cause rage or dispel fear effects, blue gems calm emotions or dispel charm effects, yellow gems cause crushing despair or grant a +1 bonus to reaction checks, and green gems cause fatigue (for 1 turn) or inspire good hope.

Finally, the 1st level laser mage can use his light projector to analyze materials, gases and liquids. A knowledge task check is required to interpret the results (Will task, modified by Wisdom, skilled), which determine the material’s content, and which can detect magic.

At 3rd, 5th, 7th, and 9th level, the laser mage can add a gemstone worth at least 50 gp to the handle of his light projector to improve the projector's function. The laser mage determines the improvement gained at each level. Only one improvement can be applied to any given light effect. The potential improvements are: Double range, double duration, impose -2 penalty to saves against the effect and add +1 to hit on ray attacks. 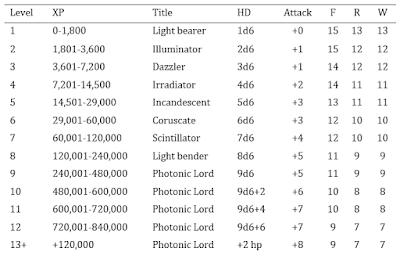 Posted by John Matthew Stater at 9:56 AM