Personal Quests - The Quest of the Mind

When I started this, I knew that I wanted to do three versions of the personal quest, one to challenge each of the mental ability scores. The Quest for Romance challenges Charisma, and the Test of Faith challenges Wisdom. What to do with Intelligence, though? 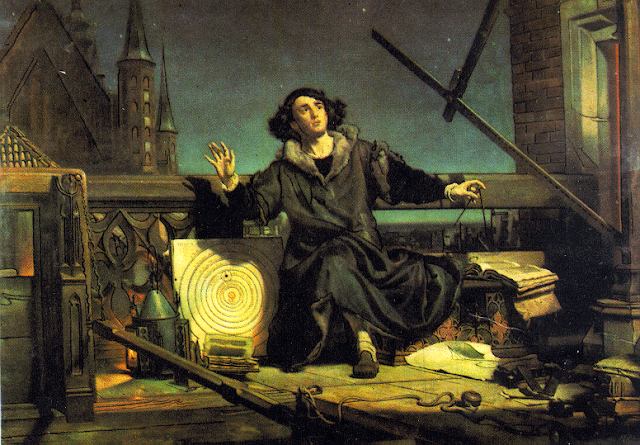 Quest of the Mind

In a quest of the mind, a character challenges the foundations of knowledge in the game world he inhabits. We're talking Copernicus vs. Ptolomy here, and that makes this maybe the biggest quest of all, since, on a fundamental level, it allows the player to screw with the game world at large. Naturally, allowing such a quest is totally up to the Referee, who might not like to have his game world turned upside down - but if a game world is beginning to get stale, what better way to freshen things up?

So, what counts as a scientific revolution in a fantasy world? Obviously, disproving the function of magic is out of bounds - too many people actually using magic to make that world. A few possibilities might be:

Human beings evolved from apes (or locathah or green slime)

The world is round (or flat or cubical or a dodecahedron)

You get the idea. Whatever is being "proven" must be, according to everything everyone in the game world knows (i.e. what the Referee initially made up), wrong.

I won't lie to you - guidelines for such a thing are not easy to come up with, so a great deal will be left up to the Referee and player.

The character makes a very public announcement - perhaps in the court of the World Emperor or, if the printing press exists, in a widely published paper that shocks (SHOCKS) sages all over the world to their core.

The iconoclast must risk points of intelligence here - a maximum of 8 - with failure indicating that something he or she thought was true about the cosmos was wrong - i.e. the iconoclast was not as smart as everything thought they were. The intelligence risked should be commensurate with the impact of the proposed scientific revolution.

Now we get to the meat of the quest, and we have to get into some real D&D-isms to make it work, since such a proof is generally not the stuff of grand adventure.

In order to prove his theory correct, the iconoclast must gather evidence - at least one piece of evidence per point of intelligence risked. The iconoclast's enemies (and they will be many, and may be very powerful) will work actively against her - so beware assassins in the night and annoying bureaucrats in the day.

The pieces of evidence to be gathered should fall into the following categories:

Mathematic - A mathematic proof must always be one of the bits of evidence gathered. Creating this proof is the equivalent of creating a new spell, with the level of the spell being equal to the number of points of intelligence the iconoclast is risking. Normal spell creation rules apply (for whatever system you are using), with the exception that the iconoclast can use the services of a sage rather than alchemist to aid in his research - provided he can find a sage willing to risk his reputation to help the iconoclast. Since this is a pretty dry sort of evidence to collect, you probably don't want to let the iconoclast do it more than once to count for his evidence.

Ancient Lore - This involves finding ancient lore that might bolster the iconoclast's theory. Maybe it is an ancient book scribed by a long-dead archmage, a stone tablet made by pre-human fish people or observations on the cosmos worked into the gown of an ancient king by his court astronomers. Whatever it is, the iconoclast must first find a clue that it exists, and then he must find it. This might involve dungeon delving, but it could also involve performing a service for the owner or stealing it from the owner.

Specimens - Natural specimens, be they ancient fossils, samples of elements (i.e. periodic table elements, not "four classical" elements) or samples of animal or plant life (or monster life). Whatever they are, they should be exotic and hard to come by. Again, this dovetails nicely with the traditional focus of D&D, and should help keep the iconoclast's fellow adventurers happy.

Experiments - This can be a bit tougher, of course, and might best be handled in the same way as mathematic proofs. The idea would be to prove something with a public, physical experiment - i.e. dropping a heavy ball and a light ball from a tower and seeing the rate at which they fall, or measuring shadows cast by obelisks in different towns, etc. Honestly - I'm not sure how this would work - I leave it up to creative players and Referees.

However the evidence is gathered, it must at some point be presented to the assembled authorities. An academy of sages must be called forth by one of the great rulers of the land, and they must be given time to assemble. The sages (and this could include magic-users and clerics) should be in number equal to the points of intelligence at risk +2. Thus, if the iconoclast is risking 8 points of intelligence, the academy should include 10 sages. Creating this academy probably means that the iconoclast needs a royal or imperial patron - gaining such a patron can be an adventure all by itself.

Once the authorities are assembled, the evidence is presented to them and the argument is made. The process of debate is handled like a combat. Each person in this mental combat re-rolls their hit points based on their level (you might need to assign "levels" to the sages based on their age and reputation) and modifying these hit points by their Wisdom rather than Constitution. Each debater's "Armor Class" is equal to 10 plus their Intelligence score. Attacks are rolled on 1d20 and are modified by the debater's Charisma bonus (i.e. treat Charisma as though it were Strength) - damage is equal to 1d6 modified by Charisma again.

For the first bit of evidence, one opponent comes forth to challenge the iconoclast's conclusions. The mental combat is waged until one of the combatants has lost all his "hit points". If the iconoclast loses, then the piece of evidence is rejected. If he wins, then he convinces his challenger that he is correct - he has a new ally who will join him in battle for future fights! At the end of each fight, 50% of the "hit points" lost in that fight are restored. If the academy adjourns for the day (you might assume that each "round" of a combat takes 30 minutes), all hit points are restored with a night of rest.

If the iconoclast has a single ally, his next piece of evidence is challenged by 1d3 rivals. If he has two allies, it is challenged by 1d4 rivals, and so on, until he has convinced a 70% majority of the assembled brainiacs that he is correct.

If the iconoclast fails to convince at least half of the assembled authorities that she is correct, she loses the risked Intelligence and any XP earned while gathering her evidence. She is a laughing stock - a kook - and will be regarded as such by commoner, academic and noble alike. Old allies will distance themselves from her, even if they do think she is correct.

If the iconoclast convinces at least half of the authorities that she is correct, she loses only half the intelligence risked, retains half of the XP earned gathering evidence, and has created a schism in the body academic. Academic wars (or real wars, if religion is involved) will rage, and the iconoclast will have to be satisfied with shaking the status quo.

If the iconoclast convinces 70% of the assembled authorities that she is correct, she increases his intelligence score by half the points she risked (max 18, unless you want to let her intelligence go higher), gains 150% of the XP earned while gathering evidence, and she becomes, academically speaking, the most important person in the world (at least until a new scientific revolution takes place). As a celebrity, she will receive offers of patronage from emperors and kings and she will forever more have the abilities of a sage (using whatever sage rules your game uses; but not including new spellcasting abilities).

Note also that the "new reality" that has been birthed may alter the functioning of spells and unearthly creatures - if demons are proven, for example, to be nothing more than illusions of a troubled mind, they might have less power over people. I'll leave it up to the Referee how far they want things to go.

Posted by John Matthew Stater at 11:36 AM