What Gave the Magic-User a Headache? [Random] 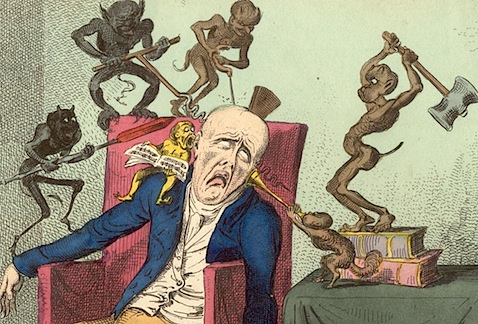 
In play, whenever a random encounter roll is made and a "3" is rolled, there is a chance of the magic-user coming down with an aching  head. Let the magic-user roll a reverse saving throw (i.e. they need to fail the save to avoid the headache) - since the higher level a magic-user is, the more stress they put on the old grey matter. If a headache is indicated, roll d% on the following Random Magic-User Headache Table and inflict some agony.

01-04. Spell Residue: When a spell is imprinted on a magic-user's brain and then unleashed, it often leaves behind a bit of itself - a spell residue, so to speak. This leads to a throbbing of the temporal lobe. The headache lasts until the magic-user unleashes all of his spells and then goes 24 hours without preparing any new spells OR until the magic-user can pass a once daily saving throw (as above). While suffering the headache, the magic-user suffers a 5% chance of spell failure and -2 penalty to all saving throws or skill throws involving concentration.

05-14. Dehydrated: Absent-minded as they are, magic-users often forget things like basic maintenance. The magic-user has become dehydrated, and this has started a headache. While suffering, the magic-user suffers a -1 penalty to all d20 rolls until he spends a day drinking a double ration of water.

15-16. Cerebral Parasite: The magic-user has picked up a cerebral parasite. The parasite lowers his intelligence score by 1d4 points (roll randomly each day) until removed with a cure disease spell.

17-19. Withdrawal Symptoms: Sometimes, a magic-user develops an addiction to a spell he or she has impressed on their minds. Randomly determine (or choose) a spell that the magic-user has memorized in the past, but which they do not have memorized now. Until the magic-user memorizes that spell and casts it for three days in a row, they suffer from a headache that gives them a 10% spell failure chance. If they go more than two days with this headache, they develop a nauseous stomach. If they go a week without memorizing the spell, they beat the addiction and are fine. If they eliminate the headache by memorizing the spell, they feed the addiction, and thereafter must memorize and cast the spell at least once per week or suffer from the withdrawal symptoms again.

20-35. Slept Funny: The magic-user must have slept funny, giving them a stiff neck and sore head. They suffer a -2 penalty to reflex saves (save vs. dragon breath, traps) and a -1 penalty to will saves (i.e. saves vs magic).

36-40. Tension - Fear: The magic-user has developed a headache from the stress and tension involved in dungeon delving. They must go 24 hours without encountering a monster or trap to remove the headache; otherwise, they suffer a -1 penalty to all will saves (save vs. magic) and a -3 penalty to all saves vs. fear.

41-45. Tension - Greed: The magic-user has developed an obsession with some piece of wealth owned by another character. Until they steal this item, they suffer a -1 penalty to all will saves (save vs. magic) and suffer a 15% spell failure chance any time they cast a spell that would be beneficial to the owner of the object of their desire.

46-50. Tension - Lust: The magic-user has developed an obsession with a fellow party member - one they would normally find attractive. Until they admit their feelings, they suffer from a -2 penalty to all will saves (saves vs. magic).

51-55. Allergies - Creature: The magic-user has developed an allergy to an animal owned by themselves or another party member, to a monster often encountered in the dungeon they are exploring (i.e. one of the monsters on the random encounter chart) or to another member of the party. When they get within 10 feet of this allergen, they suffer a headache that imposes a 5% spell failure chance and a -2 penalty to all will saves (saves vs. magic).

56-60. Allergies - Iron Rations: As above. The magic-user suffers the symptoms for 1d6 hours after consuming iron rations.

61-65. Allergies - Rope: As above. The magic-user suffers the symptoms for 1d6 hours after touching hempen rope.

66-70. Allergies - Magic Item: As above, but the allergy is to a particular magic item the magic-user recently came into possession of. The symptoms are suffered while the item is in his possession.

71-78. Pressure: The headache is caused by being more than 2 "levels" underground. The magic-user must either ascend to a higher level of the dungeon or suffer through the symptoms for 1d4+1 hours. While suffering, the magic-user suffers a 5% spell failure chance per dungeon level below 2 and a penalty to will saves (saves vs. magic) equal to the dungeon level they are on -2.

79-88. Light: Having spent so much time underground, the magic-user's eyes are sensitive to light. They can stand torchlight, but must be at least 10 feet away from the torch. Anything else causes them to suffer a -2 penalty to all d20 rolls. This lasts until they have been exposed to pain-causing light for at least 4 hours.

89-99 Eye Strain: The eye strain caused by reading spell books, scrolls and ancient chaos carvings has caused a headache. The magic-user suffers a -1 penalty to all will saves (saves vs. magic) and a 5% spell failure chance until they rest their eyes for 48 hours.