A dead eyes is an undead monster. It looks like a beautiful man or woman with frightening, dead eyes, black as night and absent of the spark of life. The monster lurks in caves or ruins, startling people first from the surprise appearance of a beautiful stranger in the wilderness, and then by the attack that follows.

A dead eyes hates beauty and happiness, and does what it can to destroy it. The monster can attack physically, even though it is semi-insubstantial, but its more potent attack is its gaze. The gaze of a dead eyes causes first physical numbness in the extremities, and then spiritual numbness. 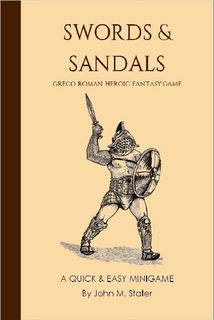 Swords & Sandals is a quick and easy role playing game based on old-fashioned gladiator and Hercules movies. Set in a fantasy Greco-Roman world, players take on the role of centurions, gladiators and sibyls, striving for gold and glory by fighting monsters and conquering cities. All you need to play is pencil, paper, a few ordinary dice, these rules, a few friends and a free afternoon. 37 pages. PDF ... $3.19 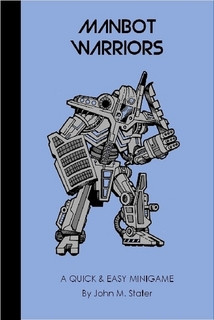 Manbot Warriors: Remember the great sci-fi cartoons of the 1970's and 1980's? Well, Manbot Warriors isn't one of them ... but it could have been. Manbot Warriors is a quick and easy roleplaying game set in a sci-fi universe where heroic manbot warriors defend the peaceful citizens of the galaxy from the evil of the Galactic Core. Easy to learn and easy to play, it requires only a pencil, paper, a few ordinary dice and these rules. 19 pages. PDF ... $2.99

I'll have the print books up for sale soon - just need to get the review copies.

CHECK THEM OUT, LET ME KNOW WHAT YOU THINK!
Posted by John Matthew Stater at 4:28 PM