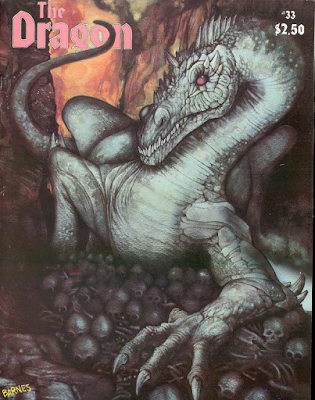 And so we bravely enter the 1980's (though, again, not technically). The Dragon #33 (we haven't dropped the "the" yet) welcomes the new decade with "Dragon's Lair" by John Barnes. The painting won Best of Show and "Best Color Fantasy" awards at the Northwest Annual Science Fiction Festival in Seattle.

What goodies await us inside? Let us find out.

Known best for the Justice Society of America, Fox also wrote fantasy novels later in life, the Kothar the Barbarian series maybe the best known of them, but also Niall of the Far Travels.

Oh, and apparently Guy Gardner was named for him (not sure that was an honor or an insult).

This issue of The Dragon features a short Niall story - the character has appeared in the magazine before. This one is "The Eyes of Mavis Deval". Here's the opening:

"It was her eyes that drew his stare as he sat astride the high-peak saddle of his stallion, there on the edge of the huge slave market. They were a brilliant green, those eyes, and it seemed to Niall of the Far Travels as he looked, that there was a tiny flame glowing in each pupil."

I got into painting Warhammer miniatures back in college, because I had waaaaay too much money and really needed to drain lots of it away on hunks of lead that I don't look at anymore. So, I know a little (very little) about painting them, and this ... 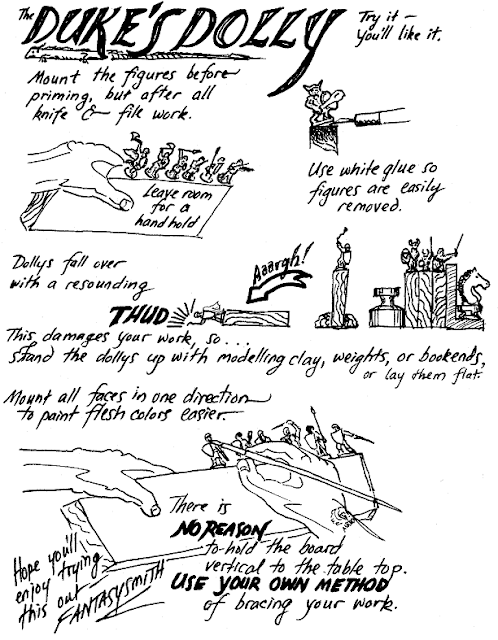 ... looks like a darn good idea to me. Presented by Fantasysmith - the person knows his or her stuff!

"My friend and I had taken our favorites: a Fighter with rippling muscles, a Cleric of somber colors and mood, a superstitious slinking Thief, and a couple of guardian Magic Users. Unfortunately, someone else was using the back way for a similar evasion. Our leaders turned a corner into a party of a half-dozen well-dressed besworded gents who, not caring to sidle past our group, began to comment acidly on our travel-worn condition, and wonder aloud whether an unpleasant odor was ours, or native to the alley."


The article is pretty interesting, in the idea of giving NPC's a Caution (Cau) score. The Caution score is used for two things:

1) The score must be exceeded on a d20 before rolling reaction dice. If not exceeded, the NPC just walks away - no interaction with the players. I kind of dig this - after all, when confronted by a group of murder-hobos, I think most normal folk would get the heck out of there, smiling and making excuses.

2) The Caution score is also used to determine whether an NPC will get involved with a PC - do they throw caution to the wind and take the plunge. Again, you roll d20 and try to exceed CAU. In the case of "woo pitching", as the kids say, you add the NPC's Libido score to the roll. Libido score, you say? What's the Libido score? 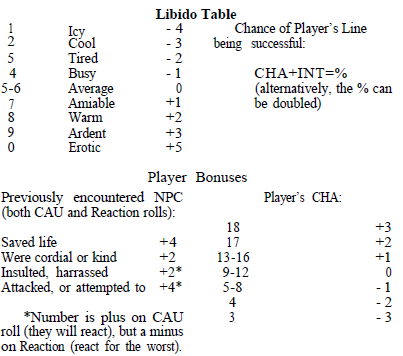 "Magic, AD&D magic, is most certainly make-believe. If there are “Black Arts” and “Occult Sciences” which deal with real, working magic spells, I have yet to see them. Mildly put, I do not have any faith in the powers of magic, nor have I ever seen anyone who could perform anything approaching a mere first-level AD&D spell without props."


Sounds like the religious nuts are already giving him trouble over the "occult" influences on AD&D.

Len Lakofka in this issue is looking at the shortcomings of some of the spells as written, and is making suggestions for improvement. Magic Missile, for example ...

"Gary Gygax and I have gone around in a circle on this spell for some period of time. The controversy, in my opinion, lies around the fact that there is NO SAVING THROW and that the missile goes “unerringly” to its target. Why is this so annoying to me? It is unfair because it allows players to foil most opposing spells by putting a Magic Missile into the opposing spell caster, it allows Magic Missiles into melee regardless of the size difference and quantity of ‘friends’ in the melee, and it allows for shots that would amaze Robin Hood with their accuracy!

Gary says that a Magic-User can counter with a simple spell like Shield to prevent this damage. What he overlooks is that the opponent must take a round to cast the Shield and in that time the spell caster is beset by fighters, et al. I find it too unfair to “monsters” that a single FIRST-level spell can be this powerful. Therefore, I have modified the spell in the following ways:

1. There is still no saving throw if the target is surprised, immobile, walking or prone and is at least the size of a Kobold.

2. Figures in melee, figures running (except those running right at the spell caster), figures evading, behind (or moving behind) significant cover, or casting a spell obtain some type of saving throw. This saving throw is their normal one with modification as follows:

A figure in melee obtains a normal s.t. but adds +1 for every opponent above the first one he/she/it is fighting (unless the size differential is so significant that the opponents do not get in the way—i.e., 6 dwarves against a hill giant would allow the giant a normal s.t. Missiles that MISS their target might hit others in the melee! Select a figure and then give him/her/it a normal s.t. to see if the stray missile hits or misses. In the above example, the dwarves would not be hit. All saving throws are on a missile-by-missile basis. Missiles fire at a rate of 1 every 3 seconds. Thus, a figure moving behind a wall might not be hit by every missile in a barrage of Magic missiles.

A figure with over 50% cover (who then presents a target size of ½ a kobold) always obtains a s.t. of from 16 to 20 depending upon cover and his/her/its actions. This prevents firing through an arrow slit some hundred feet away to hit some poor guard. I have found it necessary to rule in this way to stop Magic-Users from Magic Missiling everything that walks because of the broad language of the spell text. Magic Missile, as written, is too powerful and must be toned down."

Ladies and gentlemen, I give you rules bloat. The problem, of course, isn't the DM making the rules he wants for his game. It's in the opening paragraph:

"I felt that some spells leave a great deal unsaid (or they say too much), and thus individual rulings are often necessary to prevent abuses and to make the game fair and equitable for players and “monsters” alike."

So what's wrong with individual rulings?

Well, what was wrong was that the hobby had already grown into two camps. One was playing the game at home, and doing what they wanted with their campaigns. The other was either playing at conventions, and thus needed everybody on the same page, or was playing at home and still believed that everyone needed to be on the same page. I'm a libertarian, so you can guess which side I'm on in this argument.

In Lakofka's defense, it's not just about standardization or extra rules. It's about players being creative with spells, and trying to turn every spell into "instant death".

VI. No Swords for Clerics

I liked this bit from Lawrence Huss about why clerics may not use edged (or pointy) weapons:

"'Why, ‘tis as plain as the forbidden pikestaff! The purpose and nature of all edged weapons (and what is a point but a section of an edge?) is to cut, release blood and kill, both in reality and symbolically.

'The club, mace and flail are but growths of the staff, which stands for guidance and religious authority. Though the end result of the sword stroke and the well-aimed mace blow are the same, the symbolic intent differs. As the High Power judges our acts much from a viewpoint in which symbols supersede particulars, this symbolic difference in intent is of greatest importance, both to the performance of the specifically clerical functions and in the gaining of spiritual eminence.'"


In other words, spare the rod, spoil the bugbear.

Now, some might argue that symbolism is pointless - the enemy is dead. What does it matter that he was slashed or bludgeoned to death?

But we're talking clerics. Priests. Symbolism is everything!

Did you ever want to see a huge list of Game Masters operating in the U.S. in 1980? Great - this issue is for you. Let's check out my stomping grounds, Las Vegas NV.

We've seen Bil Coburn in the pages of The Dragon before, writing on the effectiveness of poison back in September 1978. I couldn't find him online, not David Whitney. Alas.

VIII. Question of the Month

"QUESTION: There is this character (a Magic-User) being refereed by an inexperienced DM. Because of his lack of knowledge, he let the character advance in levels too quickly. He also has 86 magic items. By the time the character got to 34th level, the DM had learned from his mistakes and proceeded to try to kill the powerful character. He tried a Ring of Transference, and when that didn’t work he hit him with 2000 (100% magic resistant) thieves. Is it within the D&D or AD&D rules for a DM to deliberately try to kill a character?"

"QUESTION: Is an invisibility spell cancelled when you fall on your face from tripping either over your own feet or from someone else’s number 13’s?

IX. The Infancy of Home Computing

This issue has the inaugural article on "The Electrical Eye", about gaming on computers. I thought the little guide to computer manufacturers was intresting: 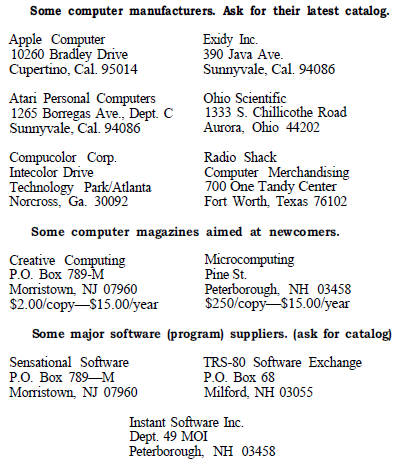 Oh, and yeah, they got the address wrong above. It was on Bandley Drive, as confirmed at this article showing the layout.

The "Dragon's Bestiary" this month is by Roger Moore - Rogar of Moria. I always like Roger in the pages of the later Dragon's that I read.

Frosts are "snow pixies" - little buggers that pack a punch. Here's an adaptation of the stats for Blood & Treasure ...

I'll leave you this fine Sunday morning with some Tramp 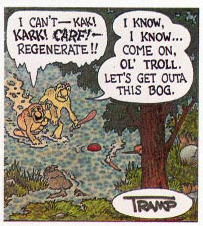 Posted by John Matthew Stater at 10:57 AM