Of Pixies and Proboscis Monkeys

Because you demanded it (well, two of you), I now proudly present the proboscis monkey (or bekantan) and pixie as playable races for Blood & Treasure. I will expect to see many bekantan and pixie characters popping up in the next few months to reward me for my toil.

The life of a bekantan is boring. They dwell in the treetops, grazing on leaves. Because the leaves contain toxins, they only eat young leaves, and they only eat a few leaves from each tree, to avoid too big a build-up of that tree’s particular toxins in their system. Tree to tree, leaf after leaf. Boring.

A rare bekantan is born a little smarter than its kin, and wants a little more out of life. These bekantan become adventurers.

Bekantan have reddish-orange fur and pink-orange faces. They are notable for their large noses (especially on the males) and pot bellies.

Bekantan are not particularly violent, and couple with their small size makes them relatively poor warriors. They usually are not intelligent enough to become magic-users, and few enter the priestly ranks. This makes most bekantans thieves (or Jimmy Durante impersonators, but I haven’t written that class yet, so we’ll let it lie).

Bekantan have a base movement rate of 30' per round and a climb speed of 20’ per round. They have a knack for climbing sheer surfaces, jumping and swimming (they have webbed toes). Bekantan enjoy a +2 bonus to save vs. poison. They can make a bite attack for 1d3 damage in place of a weapon attack. 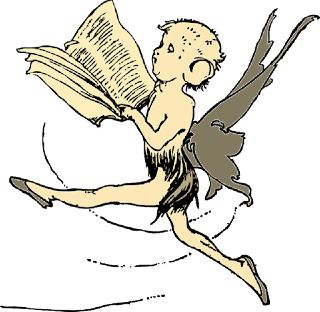 Pixies are fey kin to halflings, though far less likely to mingle with humanoids than their portly, burrowing cousins. Most live a carefree existence in the woods, doing fey stuff and ignoring the world of men and dwarves (and elves and half-elves and half-orcs and … you get the idea). A few are bold enough to step out of the woods and become adventurers.

Pixies are small creatures with a base movement rate of 20’ per round. They can also fly at a speed of 60’ per round if they do not wear armor heavier than padded or leather and if they are not encumbered.

Pixies have numerous magical abilities. They can become invisible, at will, for up to 1 minute per day per level (per the invisibility spell). They also enjoy a +2 bonus to save vs. magic.

Pixies with a Charisma score of at least 11 can cast the following spells, each once per day: Detect thoughts (ESP), detect evil and dancing lights.

Pixies can multi-class as fighter/sorcerers and sorcerer/thieves if they can meet the requirements.

All pixies suffer a -20% penalty to earned experience, due to their numerous special abilities. Pixies cannot advance beyond 8th level as sorcerers or warlocks (alternate sorcerer class), or 7th level in other classes.

Posted by John Matthew Stater at 10:04 AM