In case anyone is unaware, the following class is based on my reading of the first few chapters of The Man Who Was Thursday, a “surreal” little volume by G. K. Chesterton about the fight between the Central Council of Anarchists and the poets who form the New Police Force. 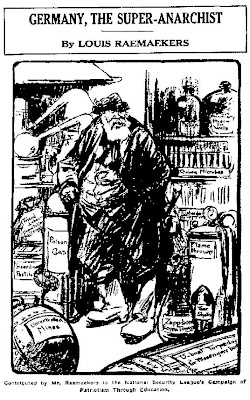 There are anarchists – the garden variety of folks who talk about toppling governments in the name of ultimate freedom, and back it up with a bomb or two, and there are the true anarchists, who look to a higher form of anarchy that cannot exist within the human (or, in fantasy terms, the humanoid) community. These fellows seek not the toppling of governments, but the toppling of humanity (or humanoidity – weird word, have no idea if it’s correct) itself.

As this would be an unpopular tack to take among the living, the true anarchists face a great deal of opposition, and therefore must organize themselves, ruthlessly and efficiently, to achieve their goals. To this end, there exists a great organization of anarchists governed by a council of seven, each member of this inner council being named for a day of the week. All anarchists seek to rise to this council, but all anarchists must first start on the ground floor, advancing the byzantine aims of the central council in the world. Just as the forces of Law delve underground in search of treasure and magic to fuel their fight against chaos, so chaos must delve to match them.


Requirements
True anarchists are artists and intellectuals; they must have a Int of 11+ and a Cha of 11+


Armor Allowed
Padded (under their expansive black cloaks), no shields


Special Abilities
Anarchists bring many special abilities to the table in their fight against Law (especially the likes of vigilantes and paladins – yuck!), but among the most important is their ability to concoct explosives. A 1st level anarchist can concoct normal explosives that become more powerful as they advance in level. In addition, they gradually learn to concoct different forms of explosives, per the following table:

All of these bombs have a blast radius of 5 feet. An anarchist of higher than 1st level can choose to sacrifice one dice of damage to increase the radius by 10 feet.

Anarchists have their own secret language, in the manner of the thieves’ cant. Called the “black tongue”, it is, more than anything else, a gobbledygook of quotations and dialectics.

With their bombs and their secret tongue, anarchists are sent into the world to work the will of their shadowy masters. To this end, they are given instructions that must be carried out – instructions they will rarely understand, so dark and brilliant are the workings of their president. Before each adventure begins, an anarchist receives a random instruction. If it is carried out, the anarchist earns an additional +10% earned XP. If the anarchist fails at his mission, he loses 10% of his earned XP.

A 3rd level anarchist is capable of unleashing a raging oratory that works in some ways as a bard’s ability to fascinate sentient creatures with his music. Those within the sound of the anarchist’s voice must pass a Will saving throw or suffer under the effects of the rage spell and vent their spleen upon the nearby symbols and agents of authority. Lawful individuals enjoy a +6 bonus to save vs. this effect, while chaotic creatures suffer a -3 penalty to save against it.

A 5th level anarchist possesses a madman’s sense of purpose and certainty. By taking a swig from their ever-present flask of brandy, they become immune to fear and magical persuasion for 1 round per level.

A 9th level anarchist may build a hideout beneath the streets of a major city, hiding within it a vast armory of weapons and bombs, and attracting to him or her 1d6 rogues per level, 1d6 first level anarchists who wish to learn from the master and a 3rd level anarchist to serve as his or her lieutenant.

Once an anarchist has a hideout, he or she is eligible to be elected to the central council, gaining a random name from Monday to Saturday. Each game month, there is a 1 in 20 chance that a sitting member will die and must be replaced, and the anarchist has a percentage chance equal to his level of being named to the position (with bonuses for any clever campaigning the anarchist does).

A similar chance exists for anarchists already on the council to assuming the presidency of the council and taking the name Sunday. 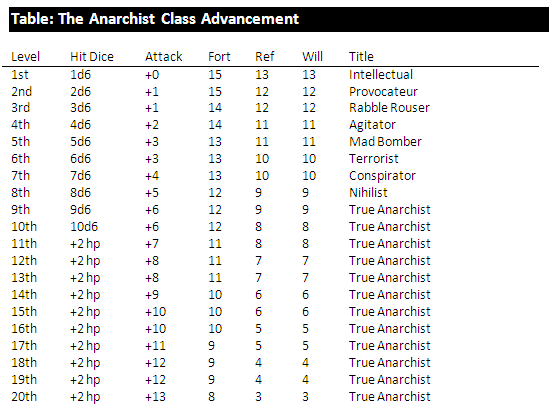