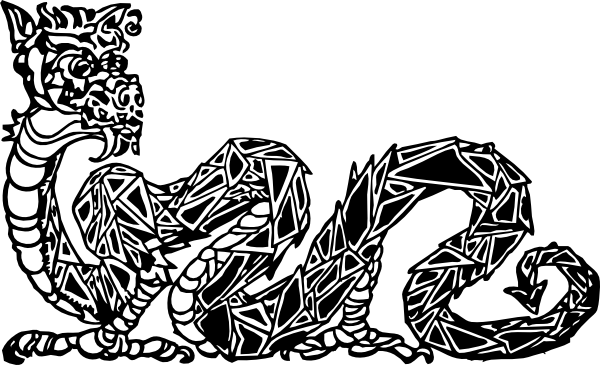 And so we come to the trickier dragons - black and white. That means, to some extent, shades of light gray and shades of dark gray. Still - let's see what we come up with for the white dragon's kin.

Achromatic Dragon: The small, feral cousins of the white dragon are covered in spiked hide reminiscent of a rhinoceros', with swept back antlers on its head and cruel, gnashing teeth in its long snout. Achromatic dragons hunt in the manner of crocodiles, lurking beneath the snow and then lunging out at victims. Achromatic dragons never speak or use spells, but they are capable of breathing a swirling vortex of snow that acts as an 8 HD air elemental's whirlwind ability and inflicts 1d6 points of cold damage each round for ten rounds.

Cinereous Dragon: Also called the ashen dragon, the cinereous is a small white dragon with an especially vicious streak. More intelligent than most white dragons, they have a 65% chance of speaking, and those who speak have a 15% chance of casting spells. Cinereous dragons cast spells as an anti-cleric and have three 1st level spells, two 2nd level spells and one 3rd level spell. A  cinereous dragon has an ash gray hide, black eyes, a purple tongue and mouth and hundreds of jagged teeth in its long snout. Atop its head are two long, black horns - like those of a Texas longhorn - and a cluster of black, horn-like spikes tips its thick tail. Cinereous dragons have no breath weapon. Rather, their presence seems to steal all the warmth and kindness from the area. All creatures within 20 feet of the beast must save each round or suffer 1d6 points of cold damage. All creatures within 50 feet of the beast must pass a saving throw any time they wish to do something unselfish or kind - i.e. a cleric using a cure spell on someone other than themselves.

Ghastly Dragon: The ghastly dragon dwells on abandoned battlefields of the frozen north, where man has spilled the blood of man. It feeds on corpses, like a raven and can whip up the echoes of the spiritual agony of men who have died in battle. These echoes appear as swirling maelstroms of screaming spirits that cover an area 60-ft in diameter around the dragon and force people within the maelstrom to save (once) or lose 1d6 points of wisdom. Ghastly dragons have scales the color of dead, human flesh, with blotches reminiscent of decay. They have stubby spikes that run from their heads to their tails and bloated bodies that waddle about on four stubby legs. Ghastly dragons have a 15% chance of speech, and those who speak have a 15% chance of casting the following spells: Phantasmal force, cause fear and animate dead.

Isabelline Dragon: Isabelline dragons are large and regal, with dull, delicate scales and long, swan-like neck. Isabelline dragons have petite heads, large, sapphire eyes and swirling horns reminiscent of unicorns. Isabelline dragons dwell in vaults beneath snowy mountains. They are capable, while holding their breaths, of passing through earth as easily as air, giving them an effective burrowing speed equal to their flying speed for up to 5 rounds. Their palaces are wondrous and luxurious, with all of the dragon's riches being spent on creature comforts and art - isabelline dragons have one-tenth the normal coins in their horde and triple the art objects/jewelry. Isabelline dragons always speak and have a 45% chance of casting 1d4 first level and 1d3 2nd level magic-user spells. In place of a breath weapon (how crude and vulgar!) they can sap the color from themselves and their surroundings (but not living creatures) in a diameter of 300 feet. Everything becomes stark white, granting the dragon the equivalent of improved invisibility and forcing those who linger in this area for more than 3 rounds to pass a saving throw or suffer from the equivalent of snow blindness (lasts for 1d3 hours).

Ivory Dragon: Ivory dragons dwell in cold woodlands in icy caves obscured by the boughs of pine trees. It is said they even smell like pine, making detecting them difficult even for creatures with a powerful sense of smell. They have ivory colored scales of varying sizes, with two ridges of bony, fan-shaped protrusions running down their backs (in the style of a stegosaurus), long necks, small, quick heads (they enjoy a +1 bonus to initiative rolls) and whip-like tails. Two long, ivory tusks jut out of their mouths, giving them a powerful bite attack. Ivory dragons are collectors, eschewing treasure for collections of books, armor, weapons, jewels, hour glasses or some other such nonsense. Their ill-tempers often drive them to scatter treasures of coins atop mountains just to keep them from the hands of folk who do value such objects. An ivory dragon's breath weapon is a cone, like that of a typical white dragon, but instead of cold damage, it has a hold monster effect (save negates) that lasts for 1 hour, as the spell. While held, a creature's skin takes on an ivory sheen, making them look like a statue. Ivory dragons have a 20% chance of speech, but never cast spells.

Pearl Dragon: Pearl dragons dwell in arctic oceans, swimming with the monsters of the deep and surfacing only to torment humanoids and demand tribute from them. Pearl dragons have bodies like elasmosauruses, with sleek heads. Their hemispherical scales gleam like pearls and their eyes shine with malevolence. Pearl dragons never speak, but can communicate telepathically up to 1 mile. They can use this telepathy to summon a pod of 1d6 orcas with a 50% chance of success once per day. Pearl dragons can cast spells as psychic powers, having 1d6 first level, 1d4 second level and 1d2 third level magic-user spells at their disposal. In place of a breath weapon, they can implant a phobia inside a person's mind. People fighting a pearl dragon must pass a saving throw or suffer from one of the following fears:

Image from CLKER
Posted by John Matthew Stater at 12:46 PM