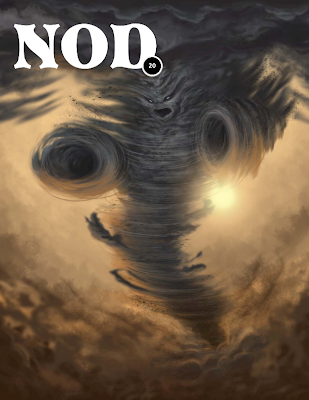 So, why did I take so long to finish one of the shortest (maybe the shortest) issue of NOD yet?

I think, first and foremost, my brain wanted to take a pseudo-sabatical from RPG writing. My post count has been low on the blog, and my output outside the blog has been a bit lower than usual. Earlier this year, I finished a couple issues of NOD and did some freelance work besides (more monster lairs), so the little grey cells, they were a bit fatigued mon ami,

While my brain was dragging its feet (sounds like something Yogi Berra would have said) on NOD 20, it was also dragging its feet on ACTION X and the NOD Companion - so I've been slowly working on all three projects.

Fortunately, I'm starting to get back into high gear (well, maybe second gear), and I'm also getting a bit more excited about NOD 21, which will detail the western half of the Virgin Woode hex-crawl. This will concern the Damnable Sea and the Victorian/Atlantean aquatic elves who dwell beneath its waves and are preparing to launch a war of conquest on the surface dwellers. They've enslaved the locathah, scattered the sahuagin, and now they're turning their eyes towards humanity!

For ACTION X, I'm currently detailing some notable automobiles from the 20th century for the game. I still need to grab spell descriptions from B&T and some psionic power descriptions from Tanner Yea's excellent Psionics of Lore supplement for the Spells/Powers section, but otherwise it's just about ready to playtest. For anyone interested in participating, I plan to run the playtest on Google+ - it will involve entering Iran Mission:Impossible-style to capture or help escape (who knows!) a scientist working on their nuclear weapons program.

For the NOD Companion, I'm detailing the gazetteer portion that gives people an overview of the NOD campaign world in its entirety. I was originally going to make it somewhat detailed, then changed my mind and thought about doing the entire thing as a travelogue involving a Tremanni merchant, and have finally settled on doing more of a glossography with some hand drawn maps. When finished, it will include the overview of NOD, a collection of classes published in NOD and updated for Blood & Treasure, new weapons and some other character-oriented articles from NOD.

So - that's the gaming side of "why it took so long". The other side is what's known as "my real job".

For those who don't know, I am a researcher/pseudo-economist who tracks the commercial real estate market in Southern Nevada (i.e. Las Vegas). I maintain an oft-neglected blog concerning commercial real estate, maintain a massive database all on my lonesome, and produce quarterly reports. Back when I started the blog and the hobby publishing, I produced three quarterly reports, detailing the industrial, office and retail markets in Las Vegas. Now, I produce those, as well as reports on the local economy, the hospitality sector, medical office, multifamily, rarely land and I help with a gaming report. I've also started doing some freelance economic work. In other words, I do quite a bit of writing, and that's detracted a bit from my hobby writing.

Still, I think I'm getting back in the swing, so expect more content moving forward than you've seen in the last few months. Hopefully, as Frog God Games finishes the big projects it has on its plate, I'll get the nod (no pun intended) to produce some more Hex Crawl Chronicles for them.
Posted by John Matthew Stater at 9:10 AM