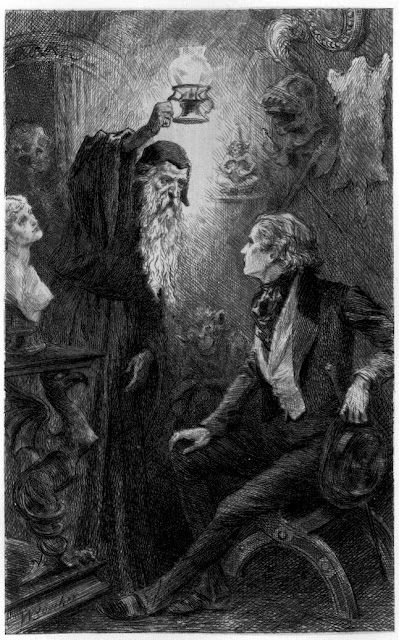 This post is really just me chasing down the thread of an idea, so don’t expect a finished product. Here’s my thought process:

Real life melee combat, medieval or otherwise, is a pretty tough thing to simulate with pen and paper. Folks are making all sorts of moves, offensive and defensive, that are pretty tough to keep track of. Because of this, Gygax and company developed an abstract combat system with hit points, Armor Class, etc.

What if we take this abstract process and apply it to other tasks – i.e. skill checks? Using combat rules really only make sense for non-combat tasks that are a process, and even then only when time is of the essence. They would be especially useful for tasks being performed while combat is underway. In these situations, though, they might work pretty well and create a pretty cool atmosphere in-game.

Before we get into specific examples, let’s break down the elements of the combat rules.

Offense in combat is governed by one’s attack bonus (or THAC0) and Strength bonus, which modifies “hitting” and damaging. In other tasks, a character using one of his class abilities/skills/concepts will “attack as a fighter of his level”, while those attempting things they know little about (little, but not nothing), would “attack as a magic-user of his level”. GMs could adjudicate situations in between these.

So, for task resolution, we need to know which ability scores govern the “attacker’s” offense, active defense and passive defense. We also need, for the “defender”, Hit Dice and Armor Class. Hit Dice here will represent the overall difficulty of the challenge, and to keep things simple, Armor Class will be 10 plus (or minus, depending on your system) the challenge’s Hit Dice.

Let’s begin simply with picking a lock. Specifically, a thief is trying to pick a lock so that the party can escape a combat they don’t think they can win.

The GM decides the lock, since it’s on the third level of a dungeon, has 3 HD and thus AC 13. For this task resolution, he rolls 3d6 and determines the lock has 9 hit points. It will get one “attack” per round, for 1d6 damage, and it turns out it contains a poisoned needle trap, so the attack actually scores 1d6 points of damage and requires the lock picker to pass a save vs. poison when hit.

The lock picker in this case is a 4th level thief. For this task, she’ll attack as a 4th level fighter – the player rolls 4d8 for her “hit points” during this task and gets 15. She’ll “attack” the lock once per round with her tools (and experience), and score 1d6 damage per hit.

For offense, the thief will use her Dexterity modifier to hit and damage. For active defense, we’ll use Intelligence to modify AC, and for passive defense Wisdom will modify Hit Points. I’m sure one could argue endlessly over which ability scores are appropriate to any given situation, but this is just an example so let's not worry about it.

So, the thief has a +2 Dex bonus, no intelligence bonus and a -1 Wis penalty. If we’re using Blood & Treasure, the thief has an attack bonus of +4 (+6 with her Dex modifier), scores 1d6+2 damage against the lock, has 11 hit points (15 modified down by Wisdom penalty) and AC 10. If you wanted to argue that leather gloves provide a +1 to AC, you probably could.

Each round during combat, the thief and lock attack one another. If the thief is reduced to 0 hit points, she fails to pick the lock, but does not die (unless she also fails a save vs. poison, since this particular lock is poisonous). Perhaps the lock can even make one of it's attacks an attempt to sunder the thief's lock pick. If the lock is reduced to 0 hit points, the lock is picked and the thief can open the door and save the party. Heck, it’s even possible that the thief is poisoned in round one, but manages to survive long enough to pick the lock before expiring. Such dramatic possibilities!

Here’s another idea. Imagine a sub-plot in a modern game requires the adventurers to sneak into a museum and steal a valuable diamond. This wasn’t really planned by the GM, so instead of hastily drawing a museum map, figuring out the security guards and cameras, etc. In this case, the museum would be the challenge – maybe 7 HD and AC 17. The GM might also rule it gets three attacks each round, from security cameras (1d6 damage), patrolling security guards (1d8 damage) and infared beams (1d4 damage). If successful, the adventurers, who are all involved in this combat, get to the diamond and take possession of it. If they fail, they are caught – at which point they might be allowed to choose to go quietly or fight their way out, in which case we would enter traditional combat in a room filled with Egyptian antiquities against two armed guards with the police on their way.

Final notion for now – spellcasting. This might be good for a more modern game or a light magic game. The level of the spell is the spell’s Hit Dice (and thus determines Armor Class). The magic-user’s offense is governed by Intelligence, his active defense by charisma and his passive defense by Wisdom.

If the spell wins, it is beyond the magic-user and he cannot cast it. If the magic-user wins, he casts the spell. Obviously, this would now govern the casting time of spells, and one could dispose of preparing spells, instead simply requiring the magic-user to have a spell in their spellbook to be able to cast it. Perhaps some high-level spells could have “special attacks”, like wisdom drain or paralyzation, to make them more dangerous.

Imagine a 7th level magic-user attempting to cast a 9th level monster summoning spell while the party is holding off a balor demon. Heck, multiple magic-users could now join forces in casting a spell, chanting together, one sprinkling the powdered bone while the other waves the wand.

Anyhow – just an idea. I might explore it further and use it in ACTION X. I'd love to hear what folks think of it.
Posted by John Matthew Stater at 5:19 PM