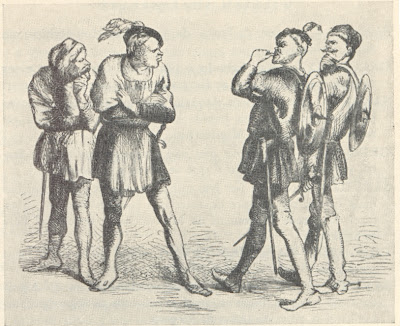 The other day, I was thinking about fantasy cities and ways to define them. Most of my cities for NOD are done as a small section of the place with interesting personalities to run into, along with a run down on the ruler, high priest or priestess, etc. Just enough to make the place memorable and with a focus on something special that might bring the players hundreds of miles – the finest armorer in the region, a black market for stolen goods, etc.

The idea of a key industry crossed my mind – think of several industries and specialties and generate one specialty in one industry in which a city excels – i.e. if you want the best éclairs, you have to travel to Barnabas, the City of Eclairs. So, Barnabus would have a bunch of master bakers who produce the best éclairs in the universe, and in fact are so skilled they can bake magical effects into their éclairs (i.e. magic potions). Barnabas would have many excellent normal bakers as well, and to support the baking industry would need associated industries like milling, farming, orchards, jelly makers, beet growers, spice merchants, etc. As I played with working this into a system, I realized that it was breaking my #1 rule for NOD – focus on adventuring. This industry stuff was interesting, but how was this forwarding the goal of sending players on adventures? Putting an hour of work into generating some demographics that will never lead to one daring sword fight, swing across a chasm, assassination attempt, kidnapping or plundered treasure horde just doesn’t make sense to me when we’re working at creating an adventure game.

One thing that did come to me, though, was the idea of rival families. You see, when I was thinking about different medieval industries, merchants came to mind. But how does a city specialize in merchants? Well, maybe banking – but every city needs merchants. And then I thought about great merchant families, and the Montagues and Capulets came to mind and I thought – you know what every fantasy city needs – rival families. Three families at least – one the most powerful, the other the bitter rival and the third the up-and-comer playing one off the other. That can lead to adventures, as players get involved with these folks and their endless machinations. With that in mind …

STEP ONE – THE FAMILY

Every family has a head – the man and woman who holds the legal reins. We need to determine how old they are and what they can do. In this case, all of these families are going to be mercantile in nature. All family heads are going to be venturers. Their level depends on their generation: Adult 1d6+1, Mature 1d8+2 and Old 1d10+3.

Now we need to roll 1d6 for the family head’s siblings. Each sibling has a 50/50 chance of being male or female and comes from the same generation as the head of the family. We’ll presume that any older family members are dead, or else they would be in the leadership position.

The siblings are probably nondescript merchant types or venturers, but might be something else. Roll to find out for sure. At the same time, roll a 1d4 to figure out their general personality.

For those with class levels, roll them as follows:

* For children of adults

For each person in the family, roll up their Charisma score as well on 3d6.

Each of these mercantile families has core assets dependent on the number and age of the family members (not including spouses). Each family also has a town house for the head of the family and each sibling, and the necessary servants for each town house (butler/valet, cook, upstairs maid, etc.)

In addition, the family gets 1d4+1 rolls on the following table of special assets.

Gallia is a phlegmatic, adult trader (3 HD) married to Merlin, a young merchant. They have three infant sons, Merlin, Arnou and Delmar.

The family also owns a caravan of 5 wagons that travels to a far away city, 8 fine hounds, a merchant galley and, though this is only rumored, a shrine to the devil Mammon in their cellar (it’s really behind a sliding wall in their dining room).