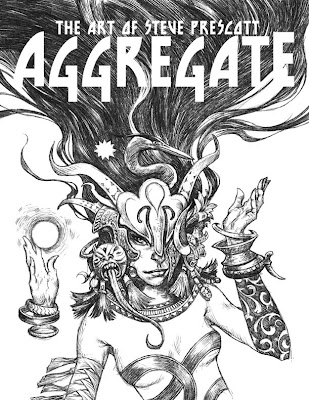 Just got an art book by Steve Prescott delivered yesterday (Aggregate - buy it, won't you) and was inspired by the chick on the cover.

Bangles of Bakram: These two bangles are carved from wood and each bears a small hole in it. The bangles were originally worn as earrings by Bakram, a highly skilled and deadly monk who weighed in the neighborhood of 350 pounds. If worn as earrings again, these items grant the wearer the abilities of a monk 5 levels, or, if you have no levels as a monk, a 5th level monk. Most folk make the mistake of wearing them as bracelets. When put on the wrists, the bangles grant the same ability, but also grant the wearer Bakram’s weight. Ballooning to 350 pounds, the person suffers a -2 penalty to their constitution score and is treated as though they are carrying their extra weight as added encumbrance.

Armlets of Devolution: These armlets, when placed around the biceps, hold tight and cannot be removed. The armlets act as rings of protection +1. Each week, the wearer must pass a saving throw or their body and mind “devolves”. Elves devolve initially into half-elves and then humans. Other demi-humans devolve into humans (of the same general height as their original race). Once human, or if they began as humans, they devolve first into a Neanderthal and then into an albino ape. Once the person has been changed into an albino ape, the armlets release from them. Changing back requires a wish.

Bracelet of Missile Deflection: These thick bracelets of gold, when clasped around the wrists, grant a +2 bonus to Armor Class against missile attacks. Moreover, when the wearer is attacked by magic missiles, they can make a saving throw to not only avoid the attack, but to deflect those missiles back at their caster.

Bracelet of Reaching: This single bracelet is made of bronze and engraved with a triangle pattern. It is normally kept off of one’s wrist, for when it is put on a person’s hand disappears and can be projected, by the wearer, from any similarly sized hole in their view. This could be the top of a vase, another bracelet, a large key ring, a mouse hole, etc. The bracelet can be pushed up to the shoulder if the wearer wishes, with their projected hand (which is part of their body and can be damaged normally) extending to the same length.

Bracers of Magnetism: These iron bracelets are set with large hematites. When clanged together, they can pull any small iron or steel item to the bracelets. If the item is held, the holder can make a strength check to hold onto their item; the bracelets pull with a strength of 25. If a sharp item is pulled to the wearer, they must pass a saving throw to avoid being hit and damaged by that item as though it was wielded by a person with a strength of 25.

Dragon Bracers: These bracers are made from the hide of a blue dragon. Once per day, the wearer can cause the bracers to cover their body with the equivalent of leather armor and granting them immunity to lightning attacks. The armor lasts for 10 rounds, but if struck with lightning immediately retract.