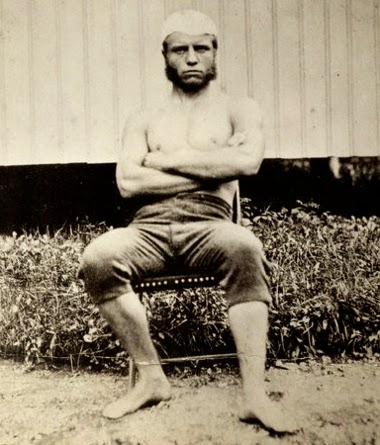 G&V had been languishing. I was finishing the Monster Tome, of course, so I was busy, but the game just wasn't gelling for me. And then POW - a kiss on the forehead by a muse who either looked like a Gibson Girl or Teddy Roosevelt (hopefully not both), and instead of finishing work on the latest issue of NOD, I've been messing with G&V night and day. For those who might be interested, a few thoughts ...

#1 - I'm focusing the main rules on the period from 1850 to 1959 - a century of manly exploits. The "adventures" section, as well as covering different genres of play (espionage, sieges, exploration, scientifiction) and sub-rules useful for those kinds of adventures, also covers each decade between 1850 and 1960, with major event (wars, assassination, inventions, discoveries) and literature and film from those years, and with stats for important firearms, vehicles and other goodies from that year as well. I'm going to include - though I haven't yet - a brief description of popular settings for manly adventures - Chicago, New York, Los Angeles, Paris, London, the Amazon, the Congo, the American Southwest, the Yukon, etc.

#2 - The character stuff is pretty well finished. I played around with using backgrounds as a stand-in for races, but then decided against it. Why? When I tried to imagine different famous characters or actual people using those backgrounds, I found them too restrictive. In their place, people now roll up a background randomly, initially focusing on making their character a School Boy, a Boy of the Streets, a Working Boy or a Cadet. The tables you roll on, though, can send you in different directions - the Boy of the Street, for example, might be taken in by a rich old woman and sent to school. This makes a character's background a bit more interesting and varied.

#3 - I struggled with classes - too many, too few, etc. At one point, I devised a method where levels were earned with experience, and with each level, adventurers could choose a new feat. These feats were classified as scholarly, martial, underhanded and rugged, and a character's class, at a given level, was based on in which category the majority of that character's feats were classed. So, if most of your feats are martial, you're a fighting man. You roll hit points with a d10, and you attack as a fighting man of that level, etc. If two levels later, most of your feats are underhanded, you're now a rogue, etc. This ultimately didn't work for me, though I might include it as an option. Instead, there are four major classes, and then sub-classes characters can qualify for if their ability scores are high enough. The classes are going to be kept fairly simple (maybe one or two special abilities), as they are done in Bloody Basic.

#4 - I've written some simple rules for guns, car chases and dogfights that I think will work, and otherwise am using the Blood & Treasure engine for task resolution and combat, with a couple added bits and pieces.

#5 - I'm about half-finished with the "monster" section, which mostly focuses on animals and human beings, but includes some more fantastic or science-fiction fare as well. Since the game is compatible with Blood & Treasure, you can introduce anything from one into the other. About the only thing I'm changing is to measure distance in Grit & Vigor with yards rather than feet - it helps with the longer ranges and faster speeds of things like cars and guns.

There's still plenty of work to do, and this weekend I really need to focus on finishing up some blog posts and getting some more work done on NOD 26, and I need to finish up Blood Basic - Contemporary Edition. But give me a month or two, and I think G&V will be ready for a playtest on Google+. If you'd like to be involved in this playtest, leave a comment here or find me on Google+. The intro adventure will either be "Taft Must Die!" or "Against the Thugee". Hopefully, it will be on sale in 2015. When it is, I plan on using the G&V engine to finish up 1800 American Empires, Apocalypse 1900, and revisions of Space Princess and Mystery Men! (yeah, I know). I'd also like to revise Pars Fortuna using the Blood & Treasure engine and with much more art.
Posted by John Matthew Stater at 9:07 AM 2 comments 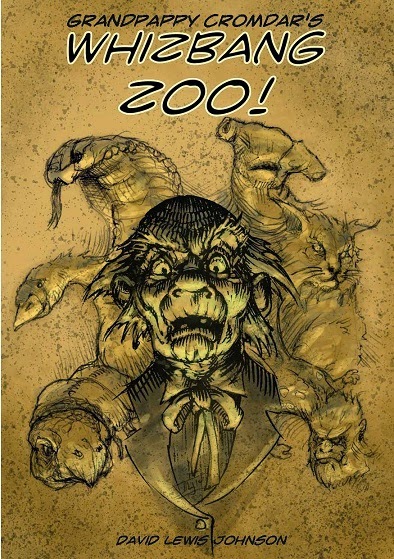 This is a review of Grandpappy Cromdar's Whizbang Zoo, by David Lewis Johnson, and yeah, I like it.

This is an old-fashioned beer & pretzels dungeon plus a menagerie of awesome monsters, all lovingly illustrated by DLJ himself - he did some kick-ass work for my Monster Tome recently, and the stuff here is even better. If you love weird monsters, and the idea of inflicting terror and pain on your player's characters with them, you have to love this dungeon.The kjellmena and muggerbeak are particular favorites of mine, and the retch fly should join the ranks of low-level monsters everyone sneaks into their dungeon.

The map is fun and interesting, and I found it easy to read. The dungeon rooms contain all sorts of interesting things, and in fact should be very useful to GM's who like to take random bits of dungeon paraphernalia and use them as further adventure hooks.

Grandpappy definitely does not keep a run-of-the-mill dungeon. It's inspired lunacy, and perfect for players who like a bit of the tongue-in-cheek element in their game, while still dealing with a solid dungeon crawl.

Do yourself a favor and give it a try.