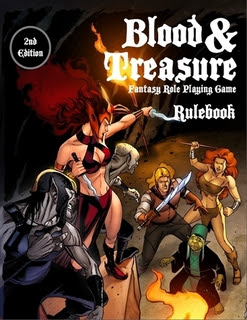 If you buy a hard cover, send me your Lulu.com receipt and I'll send along a link for a free PDF download of those same rules! 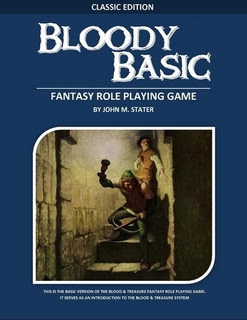 Bloody Basic is the basic version of the Blood & Treasure rules. It comes in several editions, all compatible with one another, but each taking a slightly different look at the rules.

SINEW & STEEL EDITION - PAPERBACK | eBOOK
The Sinew & Steel Edition rules remove the magic and supernatural elements from the game, making it a game of medieval adventure. It includes rules for creating medieval characters, adventuring, jousting, and besieging and storming castles. (Paperback Not Yet Released)

WEIRD FANTASY EDITION - PAPERBACK | eBOOK
The Weird Fantasy Edition rules are inspired by the wondrous prose and poetry of Clark Ashton Smith and Lord Dunsany and the art of such luminaries as Aubrey Beardsley and Sidney Sime. It include rules for the races, classes, spells and monsters of weird fantasy tales.

The first edition is on its way to Elysium, but the following titles are still available. They will, however, be updated to 2nd edition soon, and then they're off to join their buddies on the other side. 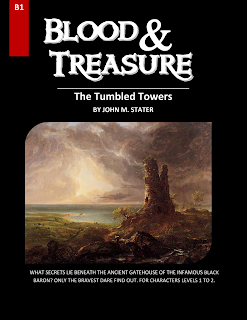 B1 - THE TUMBLED TOWERS INTRO FOR FIRST EDITION

Print edition can be purchased HERE.

SUP 1 Heroes of Lore - 52 class variants for Blood & Treasure. Download it at his blog Pulpwood or download it here. 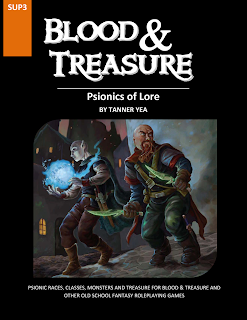 If you would like to write supplements or adventures of your own and use the official Blood & Treasure product dressing, let me know. I'd be happy to do the layout and add them to the page. All material you write remains your property!

I'm slowly working on translating all the monsters in the TKT into stat block. You can find the document HERE.

David Williams has put together an alternate progression for the optional skill points system that tracks more closely with the base skill system. Dig it HERE! (Updated Dec 2013)

For folks who like Attack Matrices, I worked up a set for Blood & Treasure you can download HERE.

Check It - B&T is an international hit. A nice review at the Raskal RPG blog en francais . Merci Raskal!

Aaron Siddall, an excellent artist wrote a nice review of the game at his Random Acts blog. 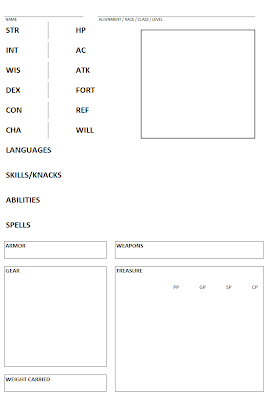 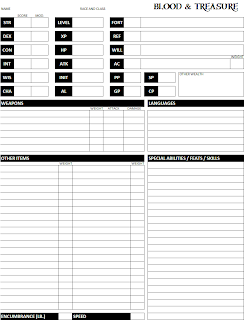 Blood & Treasure began to form the first time I was writing something for NOD, which used the Swords & Wizardry system, and needed to use a monster or spell that wasn't in S&W. You see, I love the retro clones to death, but I've always been a far-ranger when it came to my RPG playing ... i.e. if it's cool, I use it regardless of what book/game/edition is appears in. As a kid, my friends and I played "D&D" - it was really a conglomeration of Moldvay/Cook rules, all the cool classes, races, spells and monsters in AD&D and whatever cool thing we'd just seen in an issue of Dragon Magazine.

As I wrote hexcrawl after hexcrawl, I found myself often needed to "convert" a spell or monster that was in the SRD or otherwise open content, but which wasn't in S&W. Eventually, I decided it might be worth my time to grab all the monsters and spells in the SRD which weren't in S&W and produce them as conversion books, to keep me from having to rewrite things in the magazine. Once I made this decision, the next leap - just rewriting the entire SRD (well, not 100% of it, but most of it) as an old school resource - was an easy one.

So, what is Blood & Treasure? It's an RPG that lives somewhere between the various editions. It tries to link up a simple set of rules that are recognizable to most people who have played the game in the last 30+ years with all the goodies that 30+ years of gaming creativity have given us.

NUTS & BOLTS
Let's get into the nuts & bolts of the game.

Ability scores are rolled with 3d6 ... or 4d6 drop the lowest ... in order or rearranged ... you see, I don't really give a crap how you roll up a character in your game. The default is 3d6 in order, but you can do whatever you really want with it. It's the six ability scores you know and love, with ability bonuses/penalties inspired by B/X D&D (i.e. -3 to +3).

All the races and classes from the core SRD are present, with the addition of the Assassin and Duelist as full classes. I tried to walk them back to old school levels of power, and did my best to write-out the "one million bonuses and penalties" mentality of the SRD. Why? Because it makes for a simpler game.

Feats are there as an option, but they are significantly pared down and there are no feat chains. They just exist as simple ways to tweak a character, if they're permitted.

Equipment and weapons and armor are about what you would expect. Damage values are in line with the "advanced game". Most of the alchemical items and special materials from the SRD are there, but I couldn't bring myself to include tanglefoot bags. Sorry, I'm still a grognard at heart. You can add it back in yourself if you want.

Saving throws are in three categories - Fortitude, Reflex and Will. I figured it was a happy medium between S&W's one save and the five categories of old D&D. They work more like old D&D saves - a simple target number you need to meet and beat.

Combat works like it does in most editions - roll initiative (group or individual), move and attack, etc. No attacks of opportunity, simple combat maneuvers (just attack a set "difficulty class" and then the target can negate it with a save), death at 0 hp (or use the optional death and dying system), etc. The only add-on here is the idea of tactical advantage. A few tactical advantages are listed as examples, but they're primarily figured out between the TK and the players. Each tactical advantage an attacker has gives him or her a +2 bonus to hit. Every tactical advantage a defender has gives him or her a +2 bonus to AC. So, smart players are rewarded, but you don't have to memorize a bunch of different combat modifiers. In Blood & Treasure, close enough is close enough.

Almost all of the spells from the SRD are there, but they are generally simplified, streamlined and brought back to older forms. A few of the psionic powers are also turned into spells, and a few from other sources show up as well to round things out. Spell casting is simple - spells are cast on a spell caster's turn in combat, and saving throws and magic resistance apply to everything (maybe there are a couple exceptions in the text, but you get the idea). My hope is that Blood & Treasure will be a game people spend more time playing and less time discussing and arguing over.

Almost all of the monsters from the SRD are in the game, along with many from other sources and a few originals. Monsters work like they do in old games - HD, AC, attacks and damage, movement rate, saving throws and XP value. I carried over the idea of set conditions (entangled, comatose, etc.) and special attacks (swallow whole, rend) from the SRD because it means less to memorize, but I tried to keep them simple. Monsters are also rated by size (tiny, small, medium, large and huge), by monster type (animal, humanoid, outsider, fey, undead, etc.) and intelligence (animal, low, average, high, super). Many monsters have a paragraph for using them as character races, and most of the humanoids have some rules for using them in mass combat. About the only monsters that didn't make it into the game were the ones where it was just an existing monster with added class levels or HD, some of the psionic monsters that rely more heavily on the whole SRD psionics system (which isn't in the game) and some of the epic monsters. There are a few templates, but primarily serve as idea generators for modifying existing monsters.

The SRD magic items are mostly there - again, a few that relied on rules I got rid of didn't make it, but I'd say about 98% of them are there. In all cases, they were simplified. I also include some ideas on gathering rare materials to make magic items.

Ultimately, I want a game that is playable with most of the editions, though some editions would need more conversion work than others. There will be an appendix that covers converting the game from the various "eras" of fantasy role playing. Also, races, classes, spells and monsters in the game are given a notation of "A" for "advanced era" and "E" for "expanded era" to allow TK's to screen out things they don't want in their personal campaigns.

For more glimpses and thoughts about the game, click HERE to see previews from the blog.

The game will be published as a PDF, soft cover and hard cover. There will be a Player's Tome and Treasure Keeper's Tome, as well as a combined Complete Tome for those who just want one big-ass book for their shelves. The Player's Tome will probably weigh in at 150 pages, the TK's Tome at 220 - something like that. Folks who buy the hard covers will get the PDF for free. I'll keep the pricing as reasonable as possible - I mostly want to make my money back on the art I bought for the game (which, frankly, I won't ... c'est la vie).

SUPPLEMENTS
Every time I publish something, people want to know about supplements. Of course, there will always be little bits of supplemental material in NOD, but I also plan on the following (with no definite release schedule): 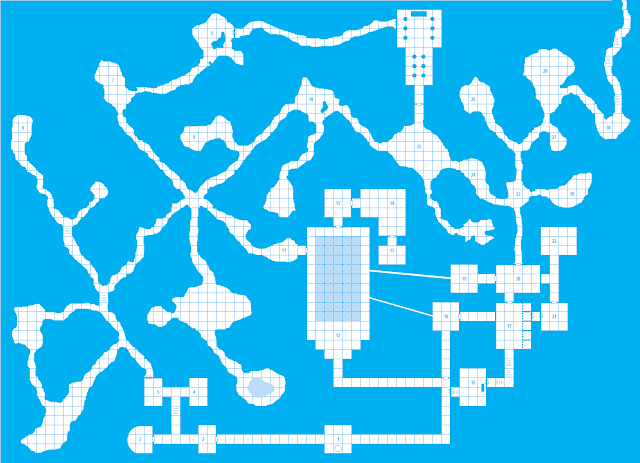 The Tumbled Towers - An intro adventure for 1st level characters. See above for the free download link!

Catacombs of Ophir - An adventure for levels 2 to 4, based on material I'm currently using for play-testing Blood & Treasure, and expanding on an article for Knockspell I did a while back.

The Ship in the Cave - An adventure for levels 4 to 6, based on material I'm currently using for play-testing Blood & Treasure.

Tome of Gods - Collection of the pantheons published in NOD, with a few more added in.

Tome of Armies - This would be an expansion of the mass combat rules (not a major expansion - they'll still be rules lite), along with a dozen or so fantasy and historical armies with Osprey-style army illustrations.