When you write as much as I do, you get used to dealing with typographical errors. Some of them are rather amusing – I remember one blog post in which some room trap involved a wench rather than a winch lifting something heavy. I suppose anybody who has ever visited modern D&D message boards knows about that game’s very mysterious “rouge” class (which I have now decided I am going to write).

One area in which I have made more than a few errors, and repeated errors at that, is with spell names. Sometimes, these screwed up spell names actually make a sort of weird sense, and it occurred to me that errors in spelling on scrolls might lead to some amusement in a game of D&D (et. al.) Grammatically incorrect scrolls could be a new category of cursed magic item – the magic-user thinks they’re casting one thing, but discover their spell has a different effect.

Altar Self: The caster is turned into an altar for the duration of the spell. Note sure if I want to know where the holy water comes from.

Animate Trope: This one takes some work for the GM. Think of a role playing trope and make it come to life (literally) during the game.

Baste: Warm meat juice is squirted on the caster, making them more delicious and stickier.

Blank: The caster’s face disappears for the duration of the spell.

Cane of Cold: A walking stick made of ice appears in your hand. Feel free to shake it angrily at your foes.

Charm Parson: As charm person, but it only works on clerics and druids (and the like).

Dorkness: The lights stay on, but the caster becomes socially awkward (Charisma 5) for duration of the spell.

Find Familiar: More of an incorrect inflection than misspelling, this spell causes they caster to find strangers strangely familiar. He just knows he knows them from somewhere, and it’s maddening that he cannot think of who they are. As a result of this frustration, he suffers a -1 penalty to Will saves for the duration of the spell.

Obscuring Mast: The mast of a ship grows from the ground right in front of somebody, obscuring their vision until they move out of the way.

Slaw: A jar of coleslaw appears.

Spectral Ham: A ghostly swine appears and otherwise acts as the spectral hand spell. This one might be an improvement over the original.

Tireball: A belted radial is launched bouncing towards a target point, and then explodes with a loud noise, sending shreds of rubber out. Basically as a fireball, without the “fire” damage and dealing minimum damage within the blast radius.

Have at it folks – I’m sure these can be improved upon and better versions can be invented.
Posted by John Matthew Stater at 11:37 AM 4 comments 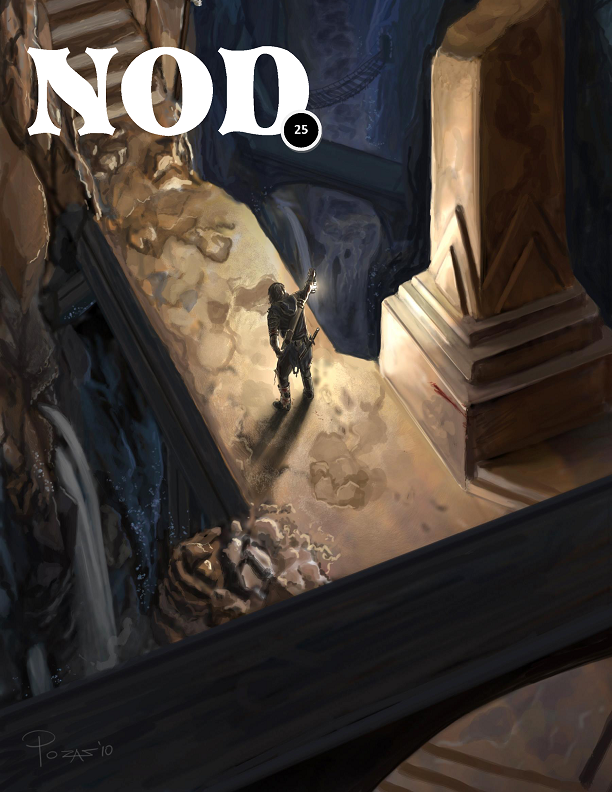 NOD 25 - the PDF version - is now up for sale at Lulu.com. The link to my shop is on the right, or you can click HERE to go directly to the magazine. What does it hold?

Now that it's up, it's time to start writing NOD 26, and to polish up the next Bloody Basic edition. GRIT & VIGOR is being play-tested now, and if I can find the time I'm going to do a short play-test adventure on Google+, in case anyone is interested.
Posted by John Matthew Stater at 9:31 PM 4 comments 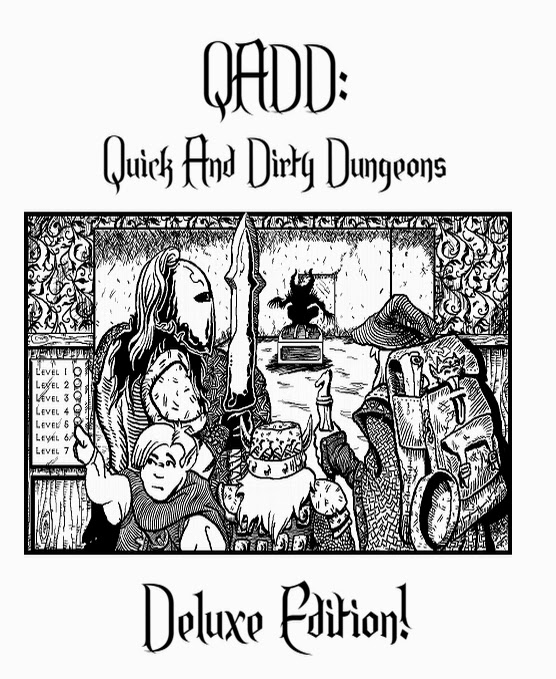 Charlie Fleming was kind enough to send me a review copy (PDF) of his game Quick and Dirty Dungeons (QADD), an excellent rules lite game that looked like a nice combination of Tunnels & Trolls and Dungeons & Dragons - though note that comes from somebody who is only slightly acquainted with T&T.

The game is 79 pages long and covers character creation, equipment, play rules, magic, monsters, along with including two adventures - one solo and one designed for play with a Game Master - and appendices A through Z consisting of all sorts of useful tables.

The layout of the game is clean and easy to read, and the art is old school black and white ... just like I like it. The writing has a fun style and is clear and easy to understand. The game presents humans, elves, dwarves and halfkins, and warriors, wizards, clerics, rangers, druids and rogues - plenty of options for players.

I think QADD is an excellent choice for pick-up games or full campaigns where you want to spend more time playing than consulting rules. I think it would also lend itself to novices learning how to play rpg's, again due to the rules lite nature of the game and the fact that the classes have simple, straight forward special abilities - not much that requires explanation or memorization.

If you're looking for a game that gets things done, I wholeheartedly recommend QADD. Click HERE to check it out.

Sometimes, you discover your own history in strange ways - things you forgot you knew or did until something jogs your memory. Recently, my family and I spent some time in Boulder City checking out antique stores. Boulder City is not far away from Las Vegas, and is the anti-Vegas in many ways. The locals are anti-development, and thus B.C. has a small town atmosphere.

One of these aforementioned antique stores had a few shelves stacked with old comic books, and they were cheap so I was bound to buy a few. I started digging in and found a bunch of old Kamandis, Ka-Zars, Battlestar Gallacticas, John Carter Warlord of Mars, Shogun Warriors ... groovy stuff from the '70s and '80s. I grabbed quite a few of those titles, and I also grabbed a couple old Alpha Flights.

When I first got into comic books in the '80s (after playing TSR's Marvel Super Heroes RPG, because I always get into things ass-backwards), the first two titles I grabbed onto were West Coast Avengers and Alpha Flight. So, I'm reading Alpha Flight #12, wherein Guardian dies a horrible fiery death, and it suddenly hits me ... Heather Hudson (later to be Guardian and then Vindicator) was my first comic book crush (with Mockingbird a close second).

[Quick aside - I was thinking about that era in comic books, when I first started collecting them, and something struck me. The West Coast Avengers were led by Mockingbird, the Avengers by Captain Marvel (this lady), the X-Men by Storm (in her cool costume), and Alpha Flight by Vindicator. Four women leading super hero teams at the House of Ideas, and two of them black women. Has that happened since?]

So, Nodians - who was your first comic book crush?

(And keep it clean ... there may be children present).

Posted by John Matthew Stater at 9:01 AM 7 comments

The landsknechts – roughly translated as lowland vassals – were the preeminent mercenaries of Europe in the 16th century, surpassing the famous Swiss pikemen when they defeated them at the Battles of Bicocca and Marignano. The landsknechts were first formed in 1487 by Maximilian I, the Holy Roman Emperor, as an imitation of the Swiss pikemen. Like the Swiss, they relied primarily on the pike with support from crossbowmen, arquebusiers, halberdiers and swordsmen. The landknechts probably reached their height during the Thirty Years War (which is why I’m featuring the class in this issue).

What roll could a landsknecht play in dungeon exploration? It is a common practice to bring retainers into a dungeon to help overpower enemies and soak up their attacks for the player characters. The landsknecht is a master of soldiers, a captain in the field. The landsknecht may not be as powerful a front-line warrior as the fighter, but he brings friends and knows how to use them.

A landsknecht is not trained to fight solo, like a fighter, but rather in a company of warriors. When he starts his career, he is a slightly less powerful fighter, though he receives a +1 bonus to hit with spears, pikes and other polearms due to long training with these weapons.

A 3rd level landsknecht adds a trabant to his personal guard. The trabant is a 2 HD warrior armed with a greatsword, dagger and ringmail.

A 5th level landsknecht adds a kaplan (chaplain) to his personal guard. The kaplan has the same alignment and patron deity as the landsknecht. He fights as a 2 HD warrior and casts spells as a level two adept. The kaplan is armed with a light mace, buckler and chainmail shirt.
Once per day, a 6th level landsknecht can inspire his personal guard to amazing levels of courage. As long as he is within 10 feet of them, they enjoy a +1 bonus to save vs charm and fear effects, and a +1 bonus to hit and damage for one battle.

A 7th level landsknecht adds a führer (guide) to his personal guard. The guide fights as a 2 HD warrior and has the track and survival skills as a 2nd level ranger.

Once per day, an 8th level landsknecht can inspire his personal guard to greatness. All troops within 30 feet of the landsknecht gain 1 Hit Dice, an additional +1 bonus to hit and damage, and a +1 bonus on all Fortitude saving throws for the duration of one battle.

A 9th level landsknecht adds a standard bearer (and personal standard) to his personal guard at 9th level. The standard increases the fighting ability of his special troops (trabant, kaplan, führer) by one hit dice, and grants his entire personal guard a +1 bonus to save vs. fear and magic spells. The standard bearer fights as a 3 HD warrior, using his standard as a quarterstaff. He also carries a dagger and wears a breastplate.

Posted by John Matthew Stater at 11:29 AM 2 comments