I was writing a NOD article today laying down some rules for pen-and-paper football, and decided to make a few sample teams for the article. I thought it would be fun to design the logos using the Coat of Arms Design Studio from Inkwell Ideas (highly recommended!). As I was working on it, I realized I could probably do fantasy versions of most of the teams in the NFL, and so ... 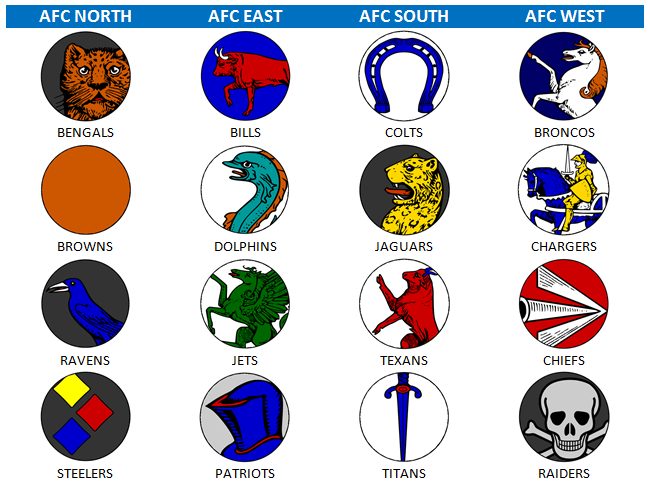 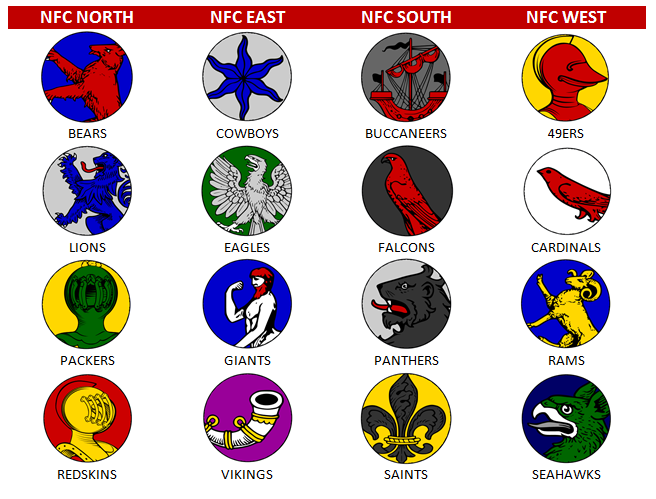 I think I was pretty close with most of them. I had to get creative with a few - a horn for the Vikings, a Pegasus for the Jets and a centaur for the Giants. I used a griffon for the Seahawks just for fun, and a few I had to just use a helm and the team colors. I think the Dolphins is my favorite.

Just a bit of fun this morning. I'm almost done writing the next hex crawl, the football article is about halfway finished, and then a few more articles and some art to commission and NOD 25 is ready to roll!
Posted by John Matthew Stater at 11:12 AM 5 comments

Into the Mountains of Chaos 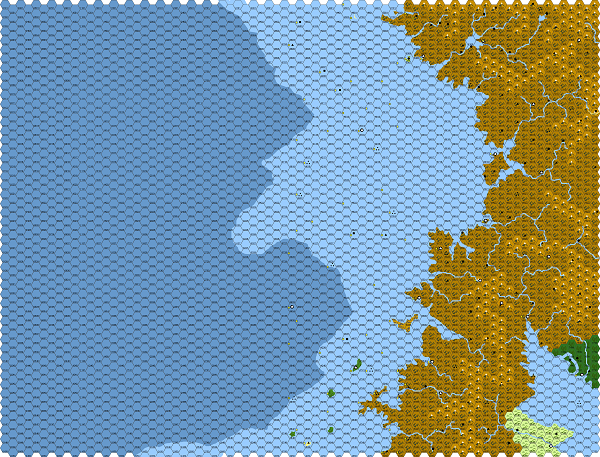 The next hex crawl for NOD is set in the Klarkash Mountains, which divide the Venatia hex crawl from the lands of Nomo, Guelph and Irem (which probably doesn't mean much, so lets say the part of the world inspired by Greece, Rome and the Fertile Crescent).

What follows are some excerpts of the hex crawl - enjoy!

3834 GHAE | CITY-STATE
Ghae is a fading city-state of deep sea locathah. The city has the pattern of a starfish, with great towers at its six points and hundreds of domes holding homes, palaces, temples, armories, workshops and the like. The city was once home to over 15,000 locathah, but only 12,500 remain, as the mithral mines they once worked have been depleted.

The deep locathah resemble anglerfish, and though they are fearsome to look upon, they are not evil. The city’s autocrat, Phlaq, wears phosphorescent shell armor as a sign of his authority. He carries a mithral scepter that looks like it was made by surface elves, and it was – it was lost at some point by Vinrix, the missing Emperor of Nomo.

The army of Ghae is 1,000 strong. The locathah wear no armor. They carry spears and often ride mechanical dunkleosteus, powered by vril. These armored mounts are slowly dying, so they are now rarely used. The soldiers are poorly paid and only barely loyal. They have turned to banditry to supplement their incomes, driving some merchants away to the west, where they hope to find welcome in other deep sea cities.

4125 BLEEDING TITAN | MONSTER
A sea titan by the name of Glaudia is drowsing in the sun here, floating on his back in the sea, which remains placid around her. Three giant leeches have attached themselves to her and are supping on his ichor. The titan isn’t particularly bothered by this, but awakening her will throw her into a rage.

5302 BLOODY STAIRS | WONDER
High in the mountains here there is a cave shrouded in magical darkness. Beyond the entrance, light works, and reveals a staircase stained with blood. The staircase leads down to a great cavern in which there is a bell composed of lead and engraved with images of fallen angels holding burning torches. When struck, the bell sends out blacklight (per the spell) in a 100-ft radius, strikes all within 60 feet with black lightning (also per the spell) and summons forth all monsters within 10 hexes to war in the name of unholy Chaos.

5404 BEJEWELED ZOMBIES | MONSTER
The walls of the river canyon here are studded with twelve spheres of force. Each one contains a rabid zombie, scratching at the sphere and trying to attack anything that comes within sight. Around their necks are long iron chains from which are suspended large iron keys. In the middle of the river, near the spheres, there is a small promontory that bears a great, iron door. The door is two feet thick and cannot be opened, for it is really a sort of elevator platform that lowers into the promontory when activated. The door/platform has twelve keyholes … so you can see where this is going.

If the platform is activated, it lowers itself slowly at first, and then quite quickly, about 300 feet into the earth. A door at the bottom of this shaft opens into the underworld.

5444 HEALING BATH | WONDER
A stone circle is hidden in the mountains here, on a meadow of daisies and purple cone flowers. The stones are jagged and white, and bear deep claw marks that form weird patterns. The circle has a diameter of 60 feet.

Under a full moon, the stones glow in the moonlight. The ground within the circle becomes first spongy and then ethereal, dropping people into a cavern below (20 ft. fall). Within this cavern, dimly lit by the moonlight filtering through the ethereal ground, there is a fountain of healing waters surrounded by a dozen statues of skull-faced nymphs. The healing bath is permitted only to Chaotic (Evil) creatures; others are attacked by silver rays from the eyes of the statues that curse them (per the bestow curse) spell.

What I Did Over My Christmas Vacation

Back to work today (real work, where I get a paycheck), and I thought I'd get the first post of the new year knocked out before I have to get down to business.

What did I do on my Christmas vacation this year? 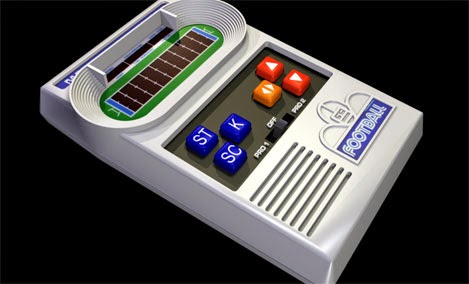 But it didn't stop there. Let's take a trip down memory lane ...

When I was but a young slip of a boy, I was obsessed with three things: Star Wars, World War Two, and Football. I was the original football geek - knew all the stats, knew the team histories, watched the games (rooted for the Steelers first and then the Raiders - I was a Las Vegas kid, so I didn't have a home team to root for), etc.

While I had never heard of D&D, I was already a gamer at heart. One summer, I invented my own football league. Lots of teams organized into conferences and divisions. Teams like the Las Vegas Aces, Billings Mountaineers, New Jersey Battleships (there's my WW2 obsession leaking through), Jacksonville Oranges, Birmingham Yellowhammers, Canton Bulldogs (I was retro before retro was cool), Georgia Peaches and my personal favorite, the Ottumwa Hogs (my family hails from Ottumwa, IA, thus the placement of a professional team in such a small market).

I designed helmets and team colors, and then I invented a very simple way to play games between them using a dice (and when I say dice, I mean d6 - back in those days, that was just a plain old dice, no extra description required). For each quarter of the game, I rolled the dice for each team to see how many points they scored. I don't remember the exact scheme now, but I'm sure it went something like this:

I would roll those dice, total up the scores, and have a winner. Then I recorded the wins and losses and ties, and eventually had them in playoffs and a championship game. I kept it all in a notebook, figuring out the schedules, etc. On a long road trip back to Iowa, it kept me occupied and entertained as only a geek can be entertained by rolling dice.

My brother-in-law gets me that electronic football game. I start playing with it, and realize quickly that all those game scores I'm generating are going to waste. What if I resurrected those old pretend football teams, plus a few others, and made a sort of tournament. Yeah. A tournament.

And I can organize the teams in Excel, with team logos and colors.

Oooh - what if I make a random table for determining off-season stuff, like teams folding or moving to new cities or picking up or losing star players.

Yeah - star players. They can give bonus offense and defense rolls that change the final score of the electronic games.

AND - I can grab demographics on the different MSA's in the US (metropolitan statistical areas) and the different stadiums, and come up with a random way to determine attendance and TV viewership and generate money earned for each team. Then they could spend money to build the teams even more.

Now I'm trying to figure out how to put together a pen & paper version of this, a little more in depth.

So, that's what I did with my Christmas vacation, along with writing about half the next issue of NOD (which will cover the Klarkash Mountains) and finishing up the first draft of GRIT & VIGOR.

Oh, and the Ottumwa Hogs are playing for the North Conference championship, against either the throwback Browns (with their classic Brownie logo) or the Minneapolis Marines.
Posted by John Matthew Stater at 9:04 AM 7 comments