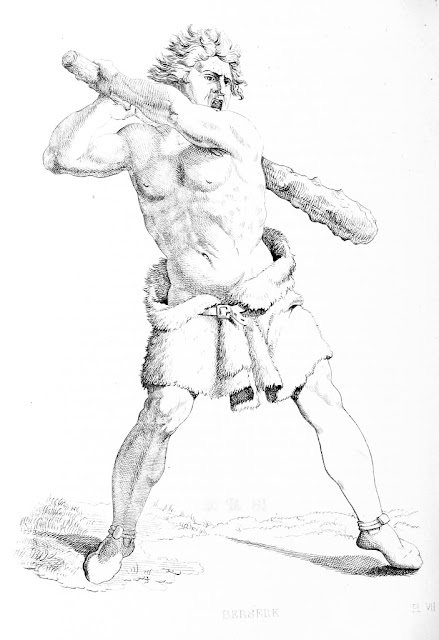 While berserk, you cannot cast spells, make ranged attacks (other than throwing things), retreat from combat, make or follow complex plans, stop attacking a foe until you or it are dead, and when you kill one foe you must move on to the next closest foe.
Posted by John Matthew Stater at 7:12 PM 2 comments

A Weird Day at the Faire 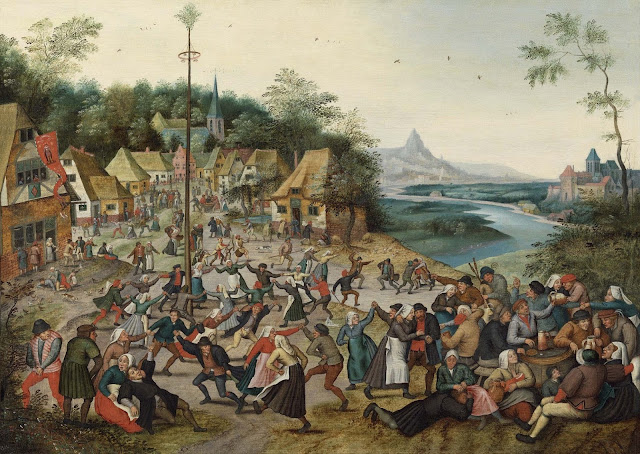 Oh, the little faire looked pleasant enough - a sort of company picnic for the feudal set, with children running about and young men trying to show off for the ladies. People strolling, eating, drinking, singing, dancing - a good time.

But since the murder-hobos are involved, there had to be something sinister lurking just under the surface ...

Roll d20 and then d4 a few times to generate some interesting or weird encounters at the faire - something the PCs can bump into as they wander. Some of these might even prove of value as game hooks - players arrive too late to stop something from happening, but are called on by the king to investigate and set things right.

Posted by John Matthew Stater at 9:50 AM 0 comments

Have you ever had a half-ass idea for a monster - just a description and a few ideas for special abilities, or maybe even just a picture - and wanted to use it without having to come up with all the other stats right then and there?

Today, I was jotting down some ideas for monsters at work and I thought up a way to do simple, one line monster descriptions and only one stat - a monster level - that ties into a random chart that determines the combat stats when you need them.

Monsters have levels that run from 1 to 10. The monster's level determines the dice you roll for its combat stats.

The combat stats are then rolled on this chart. You could do one roll and use all the stats for that line, or roll for each stat - whatever you want. Treat a roll that is less than zero as zero. 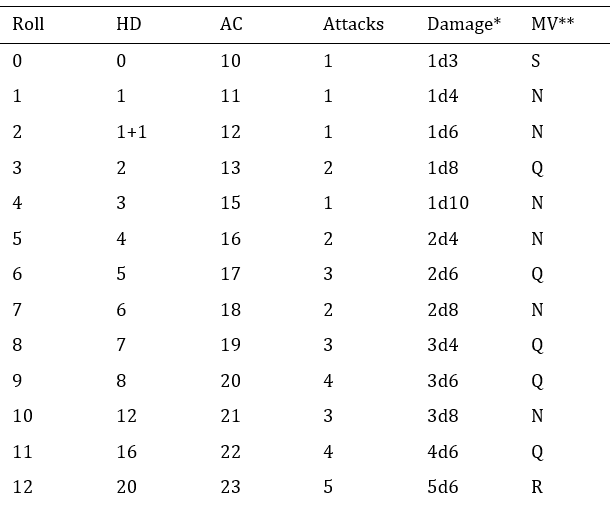 **Movement is slow (S), normal (N), quick (Q) and rapid (R) – use your best judgment for what these mean in your preferred version of the grand old game 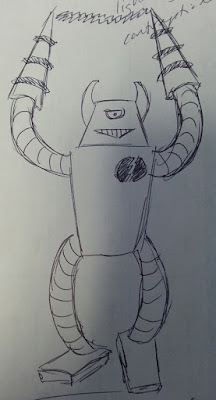 Finally - some monster one-liners (with a quick sketch of the killa-bot).

Mindbender, worms out to conquer the world; 3rd level; appear as normal neckware, control mind with their touch, magic resistance 15%


So the adventurers run into two of mercury apes while exploring a dungeon. The DM rolls d6-1 five times and discovers they have 2 HD, AC 13, 2 attacks for 1d6 damage and they are slow. She can now make a note of this for the next battle, or even roll over again the next time mercury apes show up.
Posted by John Matthew Stater at 4:28 PM 0 comments