Today, while buzzing through the internet, grabbing a quick bite, I happened across this image. 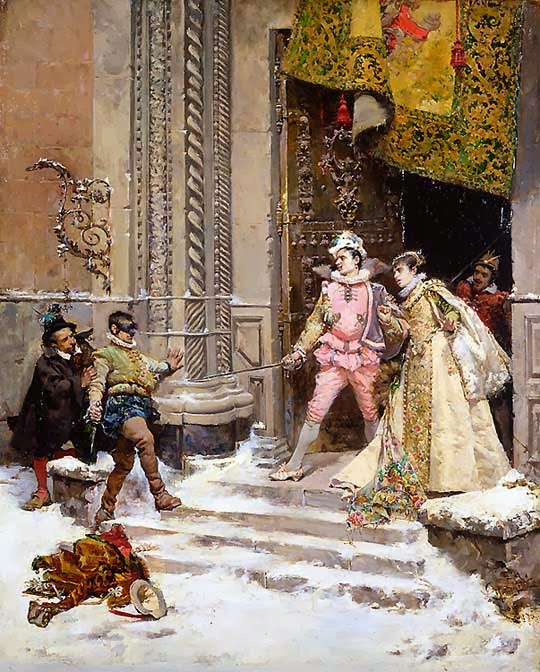 Ever since I discovered Cyrano, I've had a soft spot in my heart for the flashing blade period in all its permutations. The first thought that popped into my head when I saw this was, "You don't see too many guys like that in dungeons." If this wasn't a site about RPGs, that statement would be pretty weird, but everyone here knows what I mean. For just a moment, I started my brain on the path to rectifying that situation by making such swordsmen more amenable to dungeoneering. Then I took a u-turn.

Why not alter the set to suit the actors? Why not break down "dungeon delving" into what lies beneath it - wandering through a "landscape", meeting challenges and overcoming them (one hopes) and walking away with some manner of reward. In the traditional dungeon, the landscape is the dungeon, the challenges are monsters and traps and the reward is gold and experience. How could we change the particulars for our swordsmen without completely altering the set-up? And how could we do it for other genres?

Side Note: I recently decided it would be fun to build simple, rules lite RPG's based entirely on the output of an artist whose work is primarily in the public domain. I think that idea and the one below dovetail nicely.

For our swordsmen, the landscape is a great palace. The one in The Adventures of Don Juan starring Errol Flynn comes to mind, since it appeared to have a bit of foot traffic. The challenges might be other swordsmen and guards, of course, but they might also be courtly challenges to one's reputation. The reward would be power and position (from which flows gold, of course) and maybe romance.

"You enter the double doors and find a large, well-appointed chamber. There are expensive hangings on the walls - tapestries and paintings - and Oriental rugs on the floor. One wall is taken up with a large map of world, indicating the possessions of various empires and kingdoms. There are couches, chairs and other furniture. The room currently contains two courtiers, fops by the look of them, sitting on the couch sipping brandy. They give you a look of disdain as you enter, one of them focusing on the cuff of your shirt, which you tore while wrestling with the lady in waiting in the other chamber."

Not terribly different from a dungeon-style room containing two orcs and a bag of gold, except in this case the "monsters" are two fops and the reward is their esteem rather than a bag of gold. Of course, we would need to "monetize" that esteem, replacing gold with influence and tying that influence to different spheres. The four-fold church-state-peasants-merchants concept could work well (i.e. hearts-spades-clubs-diamonds). The fops, therefore, might be carrying 10 sp (spade points - influence with the nobility, their kith and kin) and 16 dp (diamond points - influence with merchants, their creditors) that can be obtained by trying to break down their resolve and earn their esteem through compliments and one's knowledge of proper grooming.

How would all this work? Well, I don't know for sure. Combat in RPGs tends to be pretty abstract, so I suppose a game like this would need a similar system for personal interactions. Still, the concept could be fleshed out and made to work, and would make for a very different sort of game, but still familiar enough for old hands at D&D to understand.
Posted by John Matthew Stater at 12:16 PM