The Greyhawk Tomb of Horrors Company - A Campaign Notion 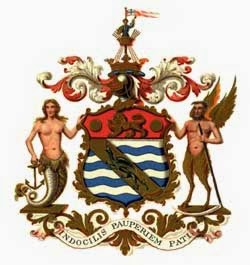 I'm still reading Adam Smith's Wealth of Nations (it's not a small book), and I'm now reading about the various merchant companies that held monopolies to trade with various colonies of the U.K. This got me thinking about using a similar concept in fantasy rpg's.

In this case, you would have countries or city-states establish control over a mega-dungeon and the immediate region around it. This actually makes some sense, when you consider the incredible wealth (monetary and magical) held in a mega-dungeon. For a fun campaign, you would probably want to establish multiple mega-dungeons in a campaign world, with different countries controlling them.

Moreover, as the adventurers hit the name levels, the strongholds they establish could be in the region of the mega-dungeon, as a means for the company to control the area. Of course, rival nations would want to wrest control of the dungeon away from the company and its country, so now wargaming can enter into the campaign. The adventurers might also get involved in conquering other mega-dungeons, and even establishing their own companies to exploit them.

As adventurers become more wealthy, they can attempt to buy more shares in the company, maybe rising the level of directors and having to engage in all the intrigue that surrounds big money and royal courts.

I imagine this could make for a fun framework for running a campaign.
Posted by John Matthew Stater at 1:33 PM