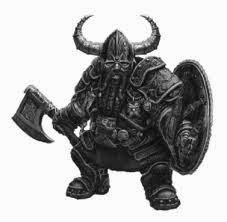 I’ve always enjoyed coming with variations on a theme, or variations on existing things in games. Of late, I’ve thought about doing themed variations on some of the existing races in Blood & Treasure – themes like the elements, or insects or animals.

For my first theme, I choose elemental earth. These races could work well in a specialty campaign, especially one set underground or on the elemental plane of earth, or can be used in an exotic section of an existing campaign world.

I'm not sure how well balanced these races would be, but you know - sometimes it just doesn't matter. If they look like fun, use them!

COAL GNOMES
Coal gnomes look generally like normal gnomes, save their flesh is composed of a substance not unlike coal. They have pitch black skin and beady eyes that glow like embers. These eyes give them darkvision to a range of 120 feet. Coal gnomes are not immune to fire, but they do have a strange resistance to it.

Coal gnomes have the same alterations to their ability scores as normal gnomes, the same knacks and the same ability to multi-class. They do not have any Spellcasting ability.

GRANITE DWARVES
Granite dwarves are stoic and seemingly emotionless; at least, they do not often show emotion. Logical and resolute, they look like dwarves carved from granite.

Granite dwarves cannot multi-class, for their minds are too focused.

CRYSTAL ELVES
Crystal elves are as graceful and lithe as normal elves. Their bodies are seemingly composed of living crystal, in various colors and hues. They rarely wear clothing, but do adorn themselves with jewelry and sometimes capes or cloaks.

A crystal elf’s skin reflects and refracts light, depending on the angle at which it is struck. When fighting in moderate illumination, all opponents engaged in melee combat with the crystal elf must pass a Reflex saving throw when they miss the elf in combat by more than 3 points, or be blinded for one round. In strong illumination, creatures locked in melee combat must pass this save each round, and creatures within 20 feet must do so when they miss the elf in ranged combat as above.

The crystal elf’s body gives them a +2 bonus to save vs. rays. They suffer double damage from sonic attacks.

Crystal elves have the normal ability score modifications and knacks, darkvision to a range of 30 feet, and they cannot multi-class.

When a sandling is struck for full damage by a physical blow (minimum 5 points of damage), they split into two tiny versions of themselves, splitting the damage as well. They must also split their equipment when they split, and their hit point total, but each of these twins retains its normal level, ability scores and special abilities. The personalities of each twin can vary, based on the original’s alignment:

The twins cannot re-merge until they get a full night’s sleep. If that sleep is interrupted, they split apart and must remain apart until they get another chance at 8 hours of rest.
Posted by John Matthew Stater at 7:01 PM