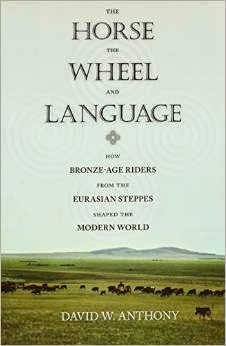 I have a tendency to run with ideas. The current one is an Age of Heroes campaign outline for NOD, or maybe Bloody Basic ... or maybe both. I've been reading The Horse, the Wheel and Language by David W. Anthony, and it got me thinking about a stone age/copper age setting from before the movement of Proto-Indo-Europeans into Europe and India. Now, I'm not going to get into whether this theorized movement actually happened - I don't have the background in it, and frankly, when I'm inventing a fantasy world to play in, I don't care.

My current thinking is to set the game in approximately 3500 BC in Europe, the Near East and the adjacent regions. This means stone age technology, with a few advanced societies using copper weapons (which may have been ceremonial, but who cares.) Armor would be padded and leather, and probably no shields. Weapons include bows, javelins, spears, daggers, maces, clubs, and hand axes. Since most are made of stone or copper, the damage should be reduced from normal, which mitigates the lack of armor to some degree. Hey - it was a rough time to be alive.

I'm thinking I'll take metal weapon damage back two steps for stone, with a chance of breakage on a natural "1" - maybe a simple item saving throw. For copper weapons, take damage back one step, with a similar chance of item's being ruined on a natural "1" attack roll. For armor, I might draw on the post I wrote about fighting naked like the ancient Greek heroes were depicted doing in art.

Horses (ponies really) will be rare, and the knowledge and technology of riding will be very limited. In fact, it was probably unknown in this period, but here's where we fudge things a bit.

Monsters will be geared towards prehistoric hold-overs from previous ages and the mythic monsters of the cultures of Europe and the Near East - manticores, chimeras, etc.

I'm working on a preliminary map of the cultures that were floating around in 3500 BC. Here, there will be some fudging and wholesale creation of ancient cultures. Mythology will be plundered, and something akin to Howard's Hyborian Age will be woven from the strands of what little we know. This is where the "Age of Heroes" idea comes in - the idea that the heroic stories of ancient peoples were really set in this prehistoric age. Hercules, Jason, etc. will be featured in one guise or another. Here, I want to make use of the demigod class I wrote up a while ago - the idea is that the player characters are demigods walking the world, creating the stories that will be told for centuries after by the tribes and kingdoms they found.

It's been a fascinating journey through prehistory for me so far - there was plenty I didn't know, primarily about the extent of stone age urbanization. I'll update you as I proceed. I'm still writing the next hex crawl. Sinew & Steel is pretty close to completion. Weird Fantasy is on hold while I bone up on my Dunsany and CAS. Still, all is proceeding nicely.
Posted by John Matthew Stater at 10:59 AM