Monsters I Just Made Up 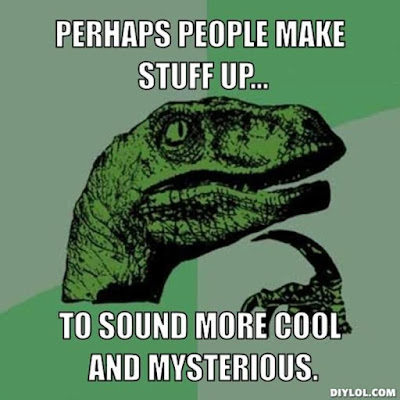 I just made these up. Do you find me more cool and mysterious!

Monkey cats dwell in the steamy equatorial jungles. They look like cats with long tails, and overlong arms and legs that end in grasping hands. Most are black, but other color schemes exist. Like both monkeys and cats, they are terribly curious, and have a penchant for theft. They dwell in prides in the tree tops under a Grand Dame, who decorates herself with stolen jewelry. Her attendants are the bullies and protectors of the tribe, while her daughters hunt and practice the ancient rites that honor the creator of the monkey cats, an Aegyptian wizard with more time and money than he knew what to do with. Crude carvings of his face are made in the high tree tops, and are worshipped with yowling songs and ritual hunts of birds and rodents.

Monkey cat characters gain a bonus of +2 to dexterity and suffer a -2 penalty to intelligence. They can hang from their tails, and gain a climb speed of 20. They can see in the dark up to 60 feet. Monkey cats can multi-class as fighter/thieves, sorcerer/thieves and cleric/thieves.

Globulous looches are buoyant balls of skin and fat with six beady eyes on their underside. They mostly float on air currents, especially in narrow valleys of high mountain ranges, observing the inhabitants and travelers and cursing them silently. When their hatred for other beings gets the better of them, they descend to the ground and split, releasing their ooze form, which then does its best to gobble up as much plant and animal life as possible as it grows a new, thick skin and regains its buoyancy. Globulous looches are especially fond of magic items, which they drain of their magic. The enchantments in the item are retained by the globulous looch for up to 24 hours, and are usable at will. Magic armor simply transfers its magical armor bonus to the looch (as well as any special abilities), and magic weapons transfer their bonus to hit and damage (as well as any special abilities). After 24 hours, a new skin is grown, and the globulous looch, if still alive, floats back into the atmosphere.

Traballers are flinty-skinned folk with manes of black hair and perpetual scowls on their faces. They stand as tall as elves, but have overlong arms and legs and pot bellies. Their touch causes sympathetic vibrations in solid items, causing them to shatter (item saving throw permitted). Stone items save at -4. Traballers most work as miners and quarrymen. They are secretive folk, dwelling away from others in simple huts, and hiding their children and wives under heavy scarlet cloaks bound at the ankles and wrists in brass bands. While so hidden, traballer females gain mystic abilities bestowed on the species by their goddess of mysteries, allowing them to cast spells as adepts (level 1 to 4).

Male traballers wear armor of leather scales with steel collars and bands around their arms and legs. In battle, they wield steel battle rings that can be used as shields (two are the equivalent of a buckler), bludgeons and can be thrown (25’ range, 1d3+2 damage).

Traballer characters enjoy a +1 bonus to Constitution, but suffer a -1 penalty to Charisma. Female characters who retain their scarlet coverings also gain a +1 bonus to Wisdom, but suffer an additional -1 penalty to Charisma (total -2) for their unnerving appearance. They can make sundering attack with their bare hands. Males understand how to fight with their battle rings. Shrouded females gain the following spells, provided they have a Wisdom score of 10 or higher, each spell usable once per day: Guidance, mending and sanctuary. Traballer characters cannot multi-class, but they can dual class like humans.