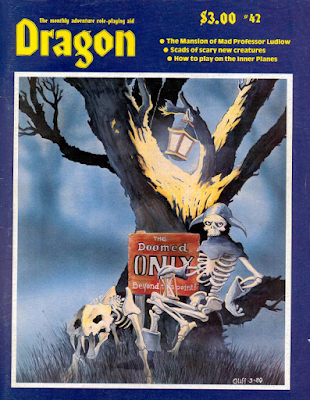 While the world is embracing Spring outside (at least here in Las Vegas), Dragon by Dragon is getting into Fall, with the cover to the October 1980 issue warning "the doomed only beyond this point". Let us throw caution to the wind, and dare to plumb the depths of issue #41 of Dragon.

For a start, the cover is by Steve Oliff, and is his first for the magazine. Steve is nothing to sneeze at - he has his own Wikipedia entry! Check out his official site if you have a mind to.

Todd Lockwood also has a piece inside - I'm looking forward to it.

I think it's important for those who are interested in the history of gaming to understand that the same petty moaning and complaining that goes on on the internet today went on on the letters page of Dragon 30 years ago. This issue we have the ever common "I don't like it, so nobody else should get to see it because its existence negates my happiness" stuff, but also this little gem ...


"While I found the article in #37 on neutral dragons interesting, I should like to point out that there is no real need for them in anyone’s world."


So there you have it. Mr. X (I won't reprint his name) has spoken. I'd like to point out that there's also no real need for idiots in the world, but what would be the point.

Speaking of art that one letter writer probably didn't like ... 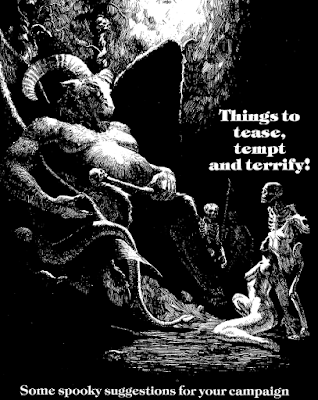 the contribution by Todd Lockwood, I believe. Now, onto the cool stuff in this issue:

First and foremost, we have a selection of new monsters by Tom Moldvay, including Saraphs from the Elemental Plane of Fire, the Apollyon (servants of Death), the Asperim, who are "super-imps" meant to exasperate players and the Hacamuli (one of the messengers of Orcus).

Since the Apollyon got an illustration, I'll do some quick Blood & Treasure stats for him:


Ashleigh Parker presents some more new monsters, born in the depths of Hell - the Possessors. Their prince is Selm, and there are three types - Kuei, Pisachas and Asuras. These are incorporeal monsters who are used to possess mortals. They would make highly interesting monsters in a campaign of court intrigue - multiple people possessed by different possessors, all serving Hell unwittingly. Just when the players think they've gotten to the bottom of it, they realize they've only uncovered one layer of the plot.

Lewis Pulsipher chimes in with "Patron Demons". This is a neat article, with rules for Chaotic Evil characters making pacts with demon princes. By making sacrifices, he or she can call on the demon prince, who will either show up himself, sent a lesser demon, or send a monster to fight with the caller. You could use this article as the basis for some Chaos Cult wars - the players busting chaos cults, who are sacrificing innocents and then can call on demon princes to help them conquer a kingdom or who knows what.

"A thief, however, may attempt to steal from the dead. The Dungeon Master should judge the success and the possible repercussions of the attempt on the type and amount of grave goods taken, precautions-magical and otherwise-taken by the thief, methods used and other significant variables.

Note that robbing any burial mound of recent manufacture (defined as up to ten centuries old) will bring back the dead spirit 10-100% of the time, depending on the age of the burial mound. The DM rolls a d 10 to determine age. then percentile dice to see if the spirit responds."

The article goes on to describe hauntings by various undead NPC's who the characters were too cheap to bury properly.

Speaking of quotes, this one from Gary Gygax in "Making Monsters Meaningful"

"Too often DMs complain that monsters are too weak, spells and magic too strong, or players too clever. What is actually stated in most such cases is that the DM is a Dungeon Milquetoast rather than Master."


The Old Man, throwing some shade.

Quite often, I've found that I had to hold back because I was a bit better at tactics than my players, and could make minor encounters pretty threatening just by using some common sense. You have to gauge your players - if they're good, go all in. If they're not, killing 20 characters a session won't do anyone much good, so slow down and hope they catch up.

In Sage Advice, one for the "I like where they're minds are at" file ...

"Question: Is it possible for a high-level Cleric and Magic- User to work in conjunction to create a moving Blade barrier? A Telekinesis spell would provide the motion."


Oh, and apparently, no - it wouldn't work. But that's what the spell research rules are for ...

"Question: When an offensive spell’s range is “touch,” does the touch have to be with a hand?"

In a Len Lakofka article about the inner planes, there is an interesting table for generating whether encountered monsters with Int scores of 4 or lower are hostile. It depends on the relative strength of the party, if they look rich (Occupy Greyhawk?), if the monsters are hungry, etc. Check it out ...

If the monsters are intelligent, you can allow alignment differences to play a role.

I'm of a divided mind on these articles. My instinct would be to let the inner plane be an exotic place with some rules lite ways to make it distinct from the Material Plane. On the other hand, if a group of adventurers has advanced from 1st level to the point where they can enter the elemental planes, maybe you should take some major pains to make it more than just the material plane with some fancy window dressing.

At a minimum, his descriptions of the planes are pretty cool ...

"Elemental Plane of Earth: Soils are translucent, though they may be differently colored. Rock and mineral formations are solid (cannot be seen through or passed through) if they are over one cubic foot in volume. Pebbles and the like can be passed through and seen through. Large rock formations might require Passwall or Phase Door spells. Either spell would produce much longer tunnels on the Elemental Plane of Earth than on the Prime Material." 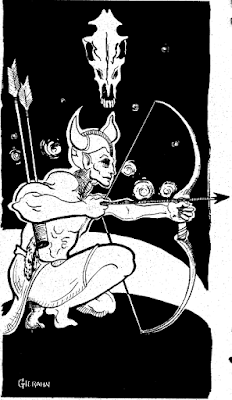 Giants in the Earth time! Moldvay brings us the following legends this month:

TSR would do well to cobble all of the stats Moldvay did for Norse heroes and legends and put them out as a mini-Legends and Lore.

Andrew South has a new monster in this issue, the Quatsch. The quatsch is a monkey with yellow fur and a skull face. Here are some quick B&T stats:


From Phil Meyers, there is the Necroton, a sort of metal crab construct made by wizards - super old school cool in the illustration by Roger Raupp

The final piece in this issue is "The Mansion of Mad Professor Ludlow" by James Ward. This is D&D, but not quite D&D. From the introductory paragraph:

"You are all young campers on a week-long camping trip through the woods and wilderness. In the middle of a nighttime hike, you become separated from the rest of your group. None of you is worried, however; you have all taken excellent compass directions and are sure you can eventually find your way back to the campsite. So, with this great chance to do a little exploring on your own, you set out into the woods as a group."


This one begs to be played on Halloween - could be a good Google+ live session. And how about that Willingham art? 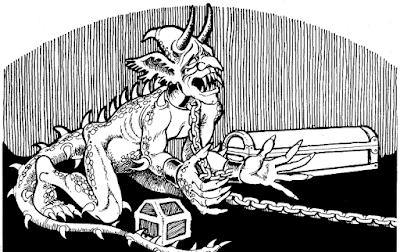 As always, I leave you with Tramp's Wormy. Have a productive week citizens, and if you can't be Lawful, at least try to be Good. 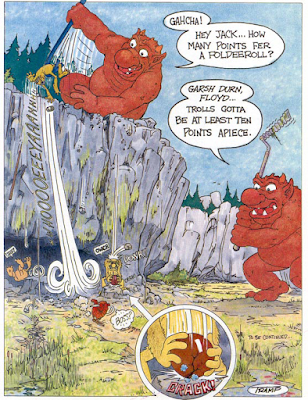