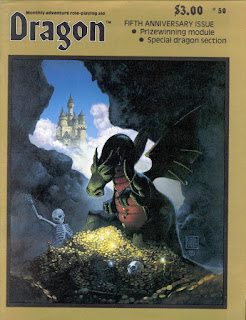 Sometimes it's hard to believe how long ago, in human terms, 1981 was. Of course, 35 years is a drop in the bucket in cosmic terms, but for a 44-year old man, it's significant. Having a brain that absorbed the early '80s one day at a time, it just doesn't seem old, sometimes like it was just yesterday.

Enough of that. Dragon #50 came out 35 years ago this month, and here's what the 5th anniversary issue has to offer.

We begin, of course, with the cover by Carl Lundgren. Very nice piece of work, and certaily appropriate for the issue, depicting a dragon hovering over its hoard of treasure (or it it the dragon's hoard?)

As I so often do, I'll start with an advertisement for a new "family board game" by TSR ...

I'm picturing those old game covers or ads from the 1960's that show a smiling family playing a board game. Little Susie having to tell mom she's "The Duke of New York - A-number-one!" I just watched the movie a couple days ago, so it's fresh in my mind.

It should come as no surprise that they have a page for the game at Boardgamegeek.com.

The game was written by "Zeb" Cook, who also wrote the Expert D&D set.

Now that I've dispensed with the TSR's homage to Snake Plissken, let's get to the first article in this anniversary spectacular - Gregory Rihn's "Self defense for dragons". The article purports to give "everyone's favorite foe a fighting chance". The article posits that dragons, as they were written in 1981, were too easy to defeat by a large, well-organized party, especially given the treasure to be gained by defeating them. This would prove to be an important article to later editions of the game, for it expands the dragon's attacks quite a bit, adding 2 wing buffets, 2 wing claws, a foot stomp and tail lash. In essence, it gives the dragons enough attacks to hit all the attackers likely to be surrounding it in a fight. He goes on to give a couple ideas for good dragon tactics. 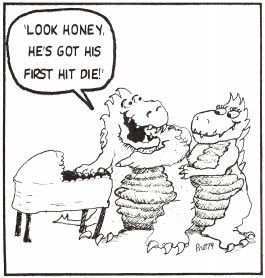 This is followed up by Lewis Pulsipher's "True Dragons: Revamping the monster from head to claw". This appears to be the theme this issue - dragon's just ain't good enough. Pulsipher gives a long table with many more age categories and a few additional powers, including shapechanging (I like this one), causing terror and some special powers. One of them - two heads - I'm planning on adding to Blood & Treasure. It also has random tables of spells known, a random table of breath weapons, with the old standards as well as a few new ones - radiation, stoning, windstorm, hallucinogen, negate magic and polymorph. All goodies! Here's Pulsipher's take on radiation:

Those failing to roll a d20 lower than their constitution become unconscious and will die of a wasting “disease” in 1-4 days. The “disease” is cured by Cure disease and Remove curse. Effects of the disease are only slowly repaired by the body after the cure. A victim might look ravaged five years after his cure if he was near death, and this may affect his charisma.


Radiation as a curse. I dig it.

Overall, I think I like Pulsipher's take a little better, using special powers instead of additional attacks to get the job done. Both would go into beefing up dragons in later editions.

Colleen A. Bishop hits on baby dragons with "Hatching is only the beginning ...", which covers little dragons from egg to birth. It's a long article, with lots of tables. Maybe worth a look if you're planning on having a baby dragon in the party for a while. 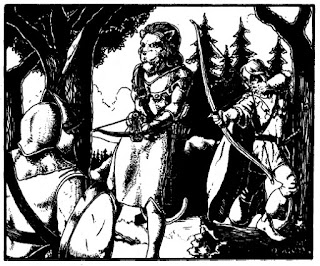 Robert Plamondon gets us off the dragon train and introduces some folks called the Kzinti. I don't suppose they need much introduction to the folks who read this blog. They're tough customers here, with 4+4 HD and two attacks per round. A small group could really bedevil a party, and they're Lawful Evil to boot. The article covers their arrival on D&D campaign worlds, their religion, social organization, magic, psionics, etc. Very thorough for a monster entry, but no info on them as a playable race.

For those interested in the history of the hobby, David F. Nalle's reviews of some old time 'zines may be of interest. He covers Abyss by Dave Nalle, Alarums & Excursions (such a great name) by Lee Gold, The Beholder by Mike G. Stoner, The Lords of Chaos by Nicolai Shapero, Morningstar by Phillip McGregor, Pandemonium by Robert Sacks, Quick Quincy Gazette by Howard Mahler, The Stormlord by Andreas Sarker, Trollcrusher, The Wild Hunt by Mark Swanson and Zeppelin.

Pulsipher has another article, a very long one with way more math than needed to deal with gaze attacks in D&D. Personally, I let people close their eyes entirely (and open themselves to all sorts of trouble), or try to avoid the monster's gaze and suffer a penalty to hit, etc.

Larry DiTillio's article on the glyphs in his campaign world didn't do much for me.

The Chapel of Silence by Mollie Plants is a prize winning dungeon at IDDC II. It's a relatively small dungeon, but looks like a good one. It begins with all the adventurers having a strange dream, and goes from there - maybe a well-worn idea now, but clever back in the day.

Back to rules articles, "The Ups and Downs of Riding High" by Roger E. Moore covers flying mounts. Its a pretty thorough look at all the potential flying mounts in AD&D at the time, and covers their diet (most are carnivores), advantages, disadvantages and how much weight they can carry. It's a useful article to keep in your pocket, in case somebody starts flying around on a dragon and you need some ideas on how to spice up the experience.

This advert caught my eye ... 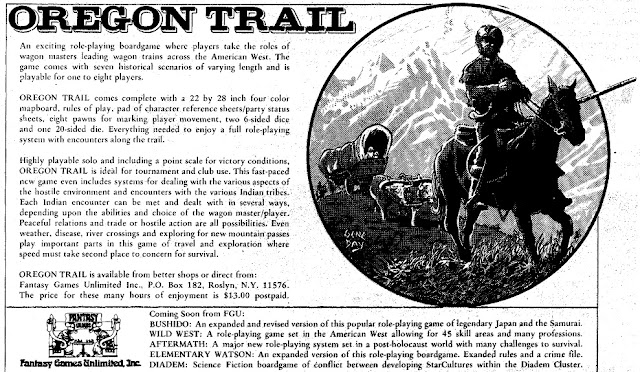 At first, I assumed it was the old computer classic, but it's something entirely different.

The Dragon's Bestiary presents the Giant Vampire Frog by Alan Fomorin. How do you not love these guys? 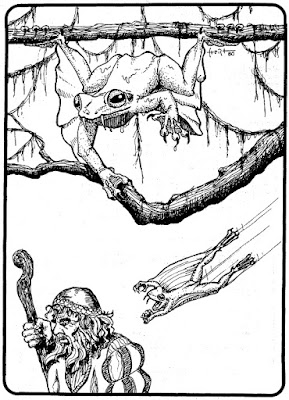 "Home computers may be the most important new consumer appliance to come along in decades. Any device that can control household lights and appliances, edit and type letters and reports, selectively monitor United Press International and the New York Stock Exchange, and play some great games besides, may be almost indispensable in the years to come."

This issue had a couple cartoons of note. First, an argument that persists to this day ... 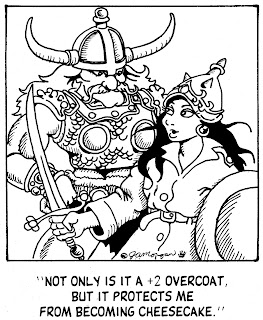 And an old take on Batman vs. Superman ... or Batman and Superman vs. something else 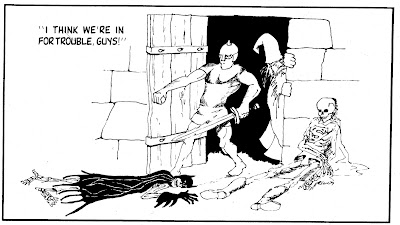 And as always, we finish with a bit of Wormy, as we begin to move into the wargaming story line ...

Have fun on the internet, and for God's sake, be kind to one another!
Posted by John Matthew Stater at 6:41 PM