The Evolution of Method

Today I'm going to chime in with a couple helpful tips for those out there writing their own hex crawls. I've written more than a few of these suckers, and my usual m.o. was to take a map, divide it in two, and write one half of the hex crawl for one issue of NOD, and the other half for the next, or sometimes with an issue devoted to cities in between.

For the Nomo hex crawl (coming out soon in NOD 31), I had initially meant to use this method, but shifted midway through. It turns out that I was making progress quite a bit faster than normal, and thus doing both halves of the hex crawl in a single issue became a possibility, and one I preferred. There were two things I did differently this time around which I think sped up the process, so I thought sharing them was a good idea.

For most hex crawls, I come up with a general idea for the crawl - a theme - and then draw out the map, generate some random hex contents, some of which I throw out, and many of which I move a round a little to get a good spread, and then I do some research. For an ancient Rome hex crawl, I'll read through some articles on Roman government, and the legions, and look at Roman mythology and Italian folklore and such to generate some ideas that I can work into the crawl.

This time around, and before I had decided on my theme, I spent a couple hours generating ideas for hex crawls. In this case, I did it by perusing the folks I follow on Pinterest and just free associating the things I saw into things one might meet. I mostly did this to alleviate boredom one night, and if you look at my old Google + posts you'll find where I posted the results.

Having this list of ideas on hand made writing this hex crawl much easier - it was easier to flesh things out and fit the stream of consciousness ideas into the Roman (and Arabic) milieu of the crawl. Free association is always a good idea when you're feeling a bit of writer's block, and it certainly helped me write the Nomo crawl.

Also - I have plenty left over for the next crawl, but will make another attempt at free association before I do.

For most hex crawls, I start writing at hex 0101, and work my way down each column. I usually set a goal for myself each night to go through anywhere from 10 to 20 entries. Some randomized contents are thrown out, so I probably write 8 to 16 entries a night. I have no good reason why I've done it this way - I just did it without really thinking. I would skip ahead sometimes to write up a city-state or some encounter that I had already generated when NOD was a campaign world of mine, but I mostly just did things in order.

This time, I plotted everything out on a map in advance. I did this because I needed to get the maps to sync up with previously published maps, and to do this dropped them all into an excel document. Having the excel doc right there, it was easy to go through and drop color-coded dots onto the hexes to represent what was supposed to go there - monsters, settlements, dungeons, wonders, etc. With all of these dots, it was also easy to draw circles around groups of them, and then each night to pick one of these "regions" and write up the encounters therein.

Not only did this prove to go muh faster than the old way, I did a much better job of making the encounters more a part of a whole than just a bunch of non-connected things one might meet. I still kept some of those non-connected bits - quite a few, really, because I like the weirdness - but creating connections between encounters was much easier.

So, free association independent of the theme, and regional writing - two evolutions of my method that allowed me to be far more productive. The next crawl covers the entire map below, and so the next issue will be around 130 pages. My next crawl, located to the east of the map below, will hopefully be just as easy to write. 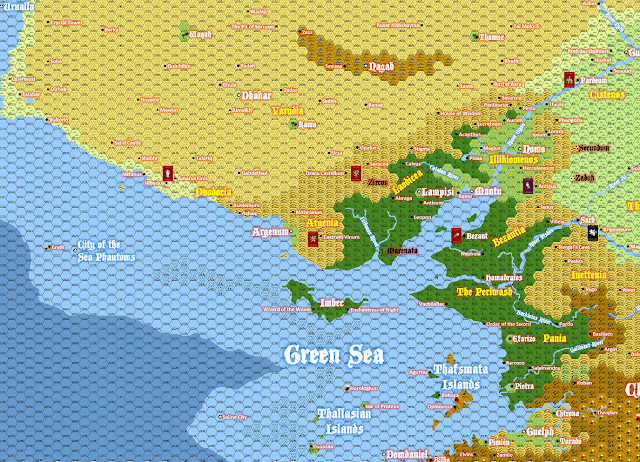