How to Make a New Class - The Land of Nod Way 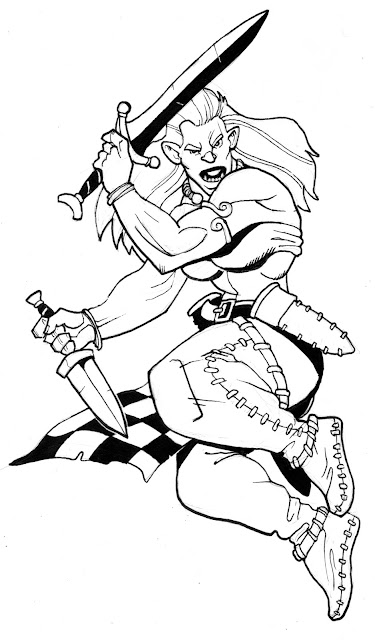 I got an email recently asking about whether I used a formula of some sort when creating a new class. I figured the answer might make a good (and easy) post for the blog, so my process is as follows:

1) I read something and think that a particular character would make a good class. I usually look for something from classic fantasy literature, folklore or fairy tales, and a character type which spans a few different sources, even though one in particular might be the original or best known (i.e. there are lots of barbarians in fantasy stories, but Conan is the best known).

It's quite fun and old school appropriate to base a character class on a particular character from fantasy, including adding in quirks about that character - i.e. the AD&D ranger being able to specifically use crystal balls because Aragorn could use a palantir. If you want to do a "mystic knight" class, go ahead and make it the Luke Skywalker class and include a whining ability - inside jokes like that are integral to the origins of the hobby.

2) I come up with level titles. Seems weird to do that second, but if I can't come up with eight or nine synonyms for the class, it probably isn't based on a broad enough concept.

3) I think up one or two specific abilities that not only fit the character, but which set it apart from existing classes. I try not to just make a new class with a mix of abilities from older classes, though sometimes an existing ability is appropriate.

4) I next look for a similar existing class and use it as my base in terms of attack bonus, save bonuses, etc. I throw in the special abilities and then try to figure out how comparable it is to the existing class in terms of power to help me decide which XP chart to use.

And that's pretty much it. I try to keep in mind that I'm making up a bit of make believe nonsense for a game - i.e. I don't take the process to seriously. Have fun. Be a little silly.

By the way - Tanner Yea's Races of Lore now joins his Heroes of Lore as a download on the Blood & Treasure page.
Posted by John Matthew Stater at 8:20 AM