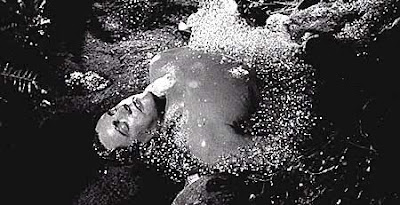 While writing the new hexcrawl, I scribbled these lovely fellows out and thought folks might find a use for them ...

Several (3d4) large seed pods float in the ocean here, and might be seen (1 in 6 chance) by a vessel passing through this hex. The pods are about 6 feet long and consist of a very thick, green hide (Armor Class 18). The pods should be treated as having 20 hit points. They are vulnerable to fire, but immune to cold.

Within the pod, there is a strange, gelatinous life form that, through its mental powers, can understand and duplicate any sentient humanoid. Each pod jelly picks a single humanoid to make its own, using its ESP to choose a likely candidate, and each day absorbs a portion of their being (i.e. 1d6 points of constitution damage) while turning itself into a clone or replica of that person. The pod must be within 30 feet of its victim to do this, and victim receives a Will saving throw each day to resist the effect. When the original’s constitution is reduced to zero, the clone bursts forth from the pod and the original’s body disintegrates.

The pod jellies duplicate the original’s body (i.e. hit dice and physical ability scores) and mind (intelligence and charisma scores, though wisdom is never higher than 6) perfectly, knowing all they knew and having the same general special abilities. They cannot, however, exhibit emotion or faith, and emotion based powers (such as a berserk rage or a cleric’s divine powers), are duplicated and therefore they are not possessed.

These are the abilities of a pod jelly in its native form, outside the protection of its pod-like shell and before it has taken on the form of a humanoid. In humanoid form, it loses its resistance to acid, though it retains its ESP ability and can still utter a psychic scream (i.e. psionic blast) once per day, though this takes the form of an actual shrill scream as well as a mental effect.

I suppose I need to include them in ACTION X.