Rankin-Bass is My Dungeon Master

If you ever spent time as an American kid in the 1970's or 1980's, you surely are aware of Rankin-Bass holiday specials. And back then, they were special. No VCR's, DVD's or internet, so you had once chance each year to see Rudolph, and if you weren't home, you didn't see it! Egad!

So many holiday specials ... and thus so much material to mine for a little RPG nonsense. So, in the spirit of Mother Goose is my Dungeon Master ...

First and foremost, we don't have adventurers in Rankin-Bass D&D. We have "misfits". Characters in this game are weirdos who don't quite fit in, and thus leave Santa's Castle or the Island of Misfit Toys to do some adventuring! Silver and Gold!

Moreover, the DM isn't a DM. He or she is the narrator, and they have to do the whole game impersonating an old celebrity. Something like The Caves of Christmas Chaos narrated by Sean Connery.

Humans have to be included as a playable race because of Yukon Cornelius. Other options could be elves (shorter than the traditional D&D elves) and reindeer (definitely a candidate for "race as class"). How about toys? Winter sprites? Lots of options there.

The bumble, King Moonracer is a shedu, giant vultures, town guards, elemental misers and their miserlings (mephits fit the bill very nicely for these guys), keh-nights (mechanical knights from Jack Frost) - many options here. Rankin-Bass adventures seem to be more centered around big villains with a collection of minions around them. That villain had better be threatening Christmas or New Years, too, or what's the point?

You're just loaded here. The North Pole, with Santa's Castle and the reindeer caves and Yukon's peppermint mine is a good home base. Burrow heavily from Candy Land and get a candy cane forest and gumdrop mountains. The Island of Misfit Toys is nearby, with its Shedu ruler King Moonracer. The weird Sea of Time that shows up in Rudolph's Shiny New Year could and should be the site of a mega-campaign all on its own. Seriously - if you haven't watched it, watch it. Great imagination fuel. You can go further afield with the Holy Land, Sombertown (apparently somewhere in Central Europe), the Russian Steppe and its Miserable Mountain, Southtown, etc. 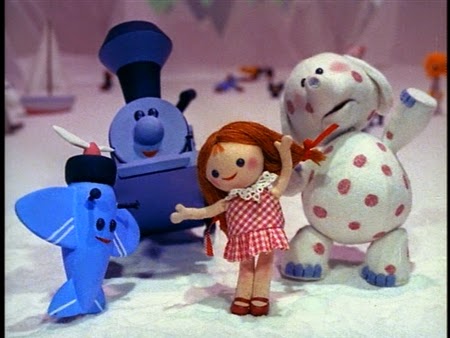 It's Christmas Eve, and your friends are over. Pull out Basic D&D or one of its clones, pick a place to adventure, make up a villain or bring back Burgermeister Meisterburger or Kubla Kraus, figure out how they're trying to screw up the holidays and then roll up some elven dentists and human knights and jack-in-the-box whatevers and get to adventuring.

Oh, and don't forget to put a little of that goodwill towards men in your hearts. Share your +1 short sword. Don't be stingy with the healing potions. Give a little love, and get a little love back. It is Christmas, after all.

And no pouting and shouting if your character dies. Santa's got his eye on you!

Note - All images are the property of their copyright owners. No intended infringement in this post - just a bit of holiday fun.
Posted by John Matthew Stater at 11:06 AM