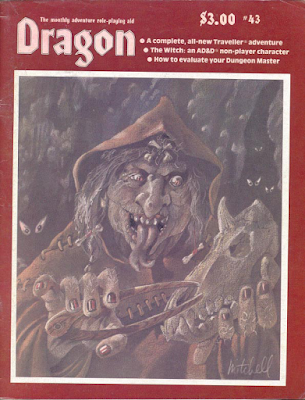 It's time for another review of the grand old Dragon, and this time with a special guest appearance by White Dwarf #21. I figure, why not look at what WD was up to during the same month of Dragon I'm reviewing - see how the gaming communities in the US and UK differed.

As you might be able to tell from the cover, this issue presents a new version of the Witch as an "NPC" class, written by Bill Mulhausen and revised and edited by Kim Mohan and Tom Moldvay. The first was back in Dragon #20, from November of 1978. I guess November is the month for witches.

This version is much like the one that will appear a few years later, dividing the witch into low (level 1-16) and high (level 17-22) orders. This is reminiscent of the AD&D druid. Here are a few of the essentials of the witch:

Requirements: Intelligence and Wisdom must be 15 or higher, must be human or elf (and elves are limited to 9th level, and can multi-class as witches).

Attack and save as magic-users.

Witches receive bonus spells for high Intelligence, as a cleric does for high Wisdom. Their chance to know each spell and such are as for a magic-user. For younger readers, AD&D magic-users had a percent chance to be able to learn any given spell of a level. This was based on their intelligence. You had to roll for each spell to see if a magic-user could learn it. So yeah, you could conceivably have a magic-user who couldn't learn magic missile, fireball or lightning bolt.

The witch has rules for followers (gains 1d10x20 at 9th level if she establishes a place of worship), and rules about how many apprentices she can have.) She can apply for membership in the high order at level 10 if her Intelligence and Wisdom are 16 or higher and if she possesses a magic crystal ball, mirror or libram. High order witches can advance to 22nd level, and they receive special high order spells at each level from 16 to 22.

Besides their spells, they can brew poisons and narcotics, which they learn as they advance in level. This includes sleep (3rd level), truth (4th level) and love potions 6th level). She can read druid scrolls with no chance of failure, magic-user and illusionist scrolls with a 10% chance of failure and cleric spells if the spell is also on the witch's spell list (8th level).

Witches can manufacture one magic candle per month at 9th level. The candles can cause love, offer magical protection, heal damage and other effects. She gets a familiar at 10th level, can brew flying ointment at 13th level, control dolls at 15th level, can fascinate with her gaze at 17th level, use limited wish at 21st level and shape change at 22nd level.

The witch has 8 levels of spells, which involve lots of charming, divination, some healing and a few offensive spells. It's a cool class, but I can't help but think you'd be just as well off with a magic-user.

Dave Cook (that one) offers some survival tips for the Slave Pits tournament at GenCon XIII. I only mention it here because those adventures went on to be classics when they were published as modules.

We also learn in this issue that Frank Mentzer won the 4th Invitational AD&D Masters Tournament at GenCon XIII. Did that crazy shirt ... 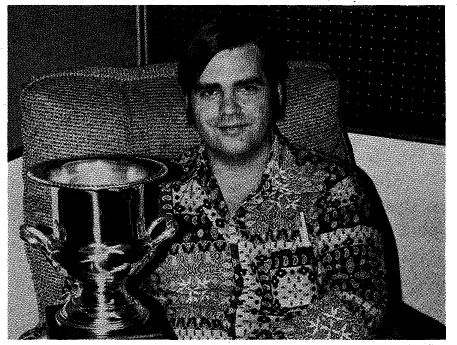 Speaking of great Dungeon Masters, this issue has a DM Evaluation Form for players to fill out. Here's a sample ... 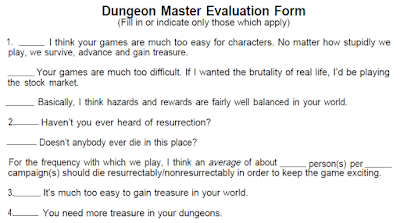 This runs on for several pages and 43 questions! A couple issues ago, a reader complained that the adventures in the magazine were filler. This, ladies and gentlemen, is filler. I'm guessing GenCon kept them busy.

The Bestiary has some choice bits ... 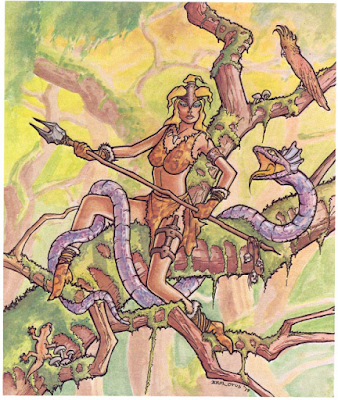 This is an amazon, art by Erol Otus (of course), monster by Roger E. Moore. I'd detail the monster stats here, but frankly, they're humans and the women do all the "men's work" and vice versa. Not much to see here - but the art is cool.

Todd Lockwood has a monster called a Tolwar that is basically a trunkless elephant who can telekinetically throw boulders (2d12 damage). They serve as loyal mounts.


Now, give me a bunch of amazon warriors on tolwars hurling boulders at a band of adventurers who have stolen some amazon gold and are hiding in a half-ruined wizard's tower, and you've got an adventure.

Philip Meyers has an article about disbelieving illusions, or more specifically phantasmal force. He comes up with a little system based on the intelligence of viewer and how suspicious they are about what they're seeing. In the table below, situation 1 represents a character who has been informed about the illusion, and 6 is where the character expects to see what the illusion is depicting - in other words, 1 is super suspicious, and 6 is not suspicious at all.

This issue contains a Traveller adventure called Canard. I won't comment, because I've never played Traveller, but if you're a fan, it's probably worth checking out.

Two reviews which might be of interest - the first a Game Designers Workshop (not Games Workshop, as I originally posted) offering called Azhanti High Lightning, about fighting aboard a giant starship. The review was positive, but wonders whether or not they should have tried to tie it to Traveller.

They also review SPI's DragonQuest, their first "serious" foray into Fantasy RPGs. The reviewer likes it - the intentional rather than random character generation, the action points in combat - but does not care for the way experience is handed out. Overall - positive review, and another reminder that Old School gaming was already becoming "Old School" in 1980.

I'll also note Hero, by Yaquinto Games. It was an "album game" - "The physical layout is like that of a double record album. The components are stored in the pockets, while the playing surface is printed on the two inside faces." 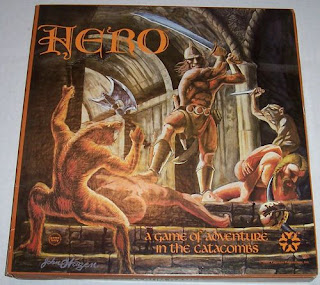 Very cool idea, and it would be fun to see something similar done these days, especially considering the connection between Old School gaming and bitchin' Heavy Metal album art. 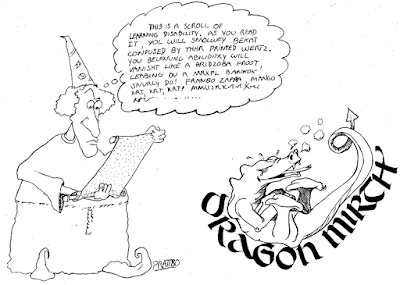 A scroll of illiteracy would be a great cursed item in a game.

A fair issue of Dragon, with a couple notable bits. 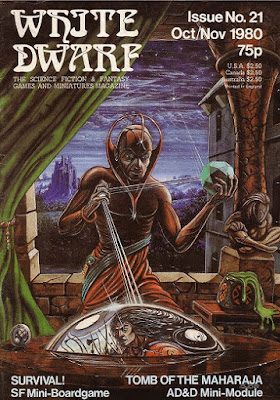 First - cool cover, but there are much better WD covers yet to come. You also notice, right off, that the layout of WD is much more professional than for Dragon at this point. Dragon makes some improvements over the years, but frankly never looked as good, and by the 1990's and 2000's looked terrible.

In this issue, Andrew Finch presents some cool material inspired by The Chronicle of Thomas Covenant, Unbeliever. We have a new class, Lore Lords, who combine the spell-casting ability of magic-users and clerics, along with d8 hit dice and studded leather armor. Fortunately, this is balanced by a high XP requirement. Similar classes are the Rhadamaerl, who specialize in the lord of stone, and Hirebrand, who specializes in the lore of wood. There are also Bloodguards, who serve as bodyguards for Lore Lords, songs of summoning and words of power. Having never read the Thomas Convenant books, I cannot rate how accurate these classes are, but for fans they're probably worth checking out. One bit I liked for Lore Lords was their ability to communicate telepathically with one another. A cool house rule might permit magic-users with intelligence and wisdom of 15 or higher to communicate this way with one another.

Roger E. Moore (yeah, that guy) presents a merchant class. It's actually pretty close to the Venturer class I did, and I promise I hadn't seen this write up when I wrote mine. Moore's merchants can open locks, appraise items and use suggestion and command when speaking with people. These are all percentage skills, like those of the thief. Good class.

Azhanti High Lightning gets a review in this issue - positive as in the Dragon.

The Fiend Factory has several cool monsters, the Brothers of the Pine, Chthon, Enslaver, Micemen, Dragon Warriors, Grey Sqaargs and Cyclops. Here are some quick stats:


White Dwarf #21 also contains a sci-fi boardgame called Survival and a dungeon called the Tomb of the Maharaja. It is, I'm afraid, quite short and not terribly interesting.

All-in-all, some pretty cool stuff from the Brits in November 1980 - and of course, lots of art by Russ Nicholson.

Well, that does it for this edition of Dragon by Dragon. As always, I leave you with Tramp ... 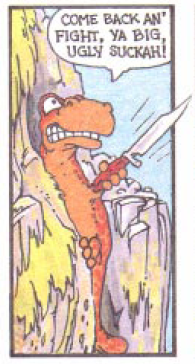 Posted by John Matthew Stater at 11:31 AM