I'm kinda sorta working on a little book called Monsters Mild, which will include 12 to 15 monsters that are not so much intended as foes to fight as they are to be things characters might meet and maybe even befriend. They are intended to be fantasy color. The first one showed up on Google+ a little while ago, and has been illustrated by the ever-wondrous Joel Priddy (blessed be his pen). The others will get their own illustrations somewhere along the line ... 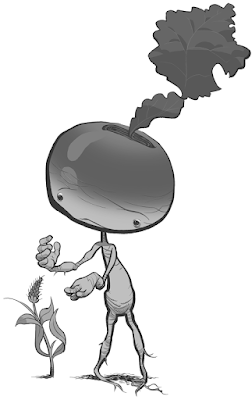 These monsters look like roughly humanoid-shaped turnips, with bushy green stalks on their head and beady black eyes and thick fingers and toes on their hands and feet. They can summon up herbs of any kind in their hands, three times per day, including poisons, medicinal herbs and cooking ingredients. They are somewhat slow-witted, though not stupid, and often take a liking to children and the elderly. Many appear before the hovels of abandoned elders and become their servants and caretakers. Man-worts do not speak (they have no mouths). They need to root themselves in soil for at least one hour per day to survive, and need as much water as human beings. They will fight when people they love are threatened.﻿

A granny woman is a fey creature that appears as a very old – an impossibly old – woman with large, knowing eyes and withered hands that hide a powerful grip. Granny women live in the woods, near enough to settlements to be helpful, but not so near as to be annoyed by all the nonsense and going’s on. They usually live with a familiar in the form of large, furry cat. These cats are ill-tempered to folks who deserve it, but quite charming (if not a little bossy) to the good-at-heart. Acceptance by a granny woman’s cat means acceptance by a granny woman. 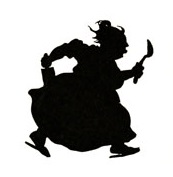 There is a 1 in 12 chance that a granny woman lives with a man-wort (q.v.), and a 1 in 6 chance they live with an orphaned child they are bringing up. If threatened, they have only to scream or whistle and one of the following creatures appears to aid them:

1. Grey Render (who likes its head to be scratched)
2. 1d4+1 brownies (who appreciate good cooking)
3. 1d6 wood elf, gnome or halfling warriors (who need their socks darned)
4. 1d4+2 cooshee (who will hang around for an ear scritch and soup bone)
5. A curtal friar (cleric or druid, 1d4+2 for level, old friend of the granny woman)
6. A ranger and 1d4 outlaws (ranger level 1d4; he and his men look after the old girl when they’re not being chased by the sheriff)

A granny woman will never turn away folk in need unless they are thoroughly wicked, and even then she will help but also place a geas on them with her touch that forces them to perform three acts of pure goodness in a fortnight.

Resistance to weapons, immune to acid, surprise (1-4 on 1d6)

Goops are small oozes with highly variable colors (and sometimes swirls of color). They lurk around corners and creep up on people, crawling onto them when they aren't looking. Goops are terribly insecure, and desire the warmth of humanoid contact. When they are clinging to people, they give off a telepathic purr that only the person they are touching can hear. The purr is calming (+1 bonus to save vs. emotional manipulation and fear).

Unfortunately, goops are extremely sticky (takes a combined strength of 28 to remove them, and there's a 50% chance anyone involved gets the goop re-stuck on them), and they can ruin armor, clothing and weapons with the mild acid they secrete when frustrated or afraid (item saving throw at +2 for metal items).

Each goop has one important, inborn piece of knowledge. In any “sticky situation” the adventurers find themselves in, there is a 1% chance that goop has the answer they are looking for, and will release it to the adventurer with which it has bonded.

Posted by John Matthew Stater at 11:03 AM