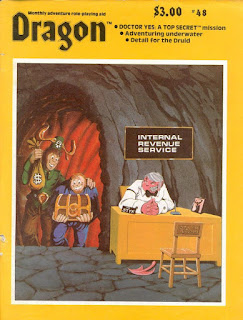 Happy Mothers Day to all the moms out there in blog land - and happy April Fools Day, since this week we're looking at an April issue of Dragon - #48, from good old 1981.

Before I hit the magazine, though, I'm going to do a little advertising - NOD 29 is now out as a PDF, at Lulu.com and Rpgnow.com. This one has the second half of the Trollheim hex crawl, the third part of the d20 Mecha series featuring some mecha stats that could be useful for all sorts of sci-fi games, Aaron Siddall's very cool Hyperspace campaign notes for GRIT & VIGOR, which combines Lovecraft with good old fashioned rocket-powered sci-fi, Tony Tucker's take on the luchador class for GRIT & VIGOR, a Quick & Easy mini-game pitting luchadores vs. the Aztec Mummy, a random class generator (along with a couple random classes that came out pretty good), info on using interesting historic coins in treasure hoards, the Laser Mage class and a couple tidbits for SPACE PRINCESS. All sorts of fun for $4.99.

And now, ladies and gents, on to the magazine.

We begin with an Arms Law ad, and a few thoughts on said ad by the writer of the blog:

That first bit is the problem - death being only one blow away with Arms Law. Many would argue that it's more realistic than D&D combat ... and they're right. That's precisely the problem. We already live in the real world, where death is one blow away. That's why most of us live boring lives and indulge in fantasy for our excitement. I'm not sure injecting that kind of realism in fantasy is worth the trouble. A realistic game for the sake of the challenge, on the other hand, can be quite engaging. Just a thought. 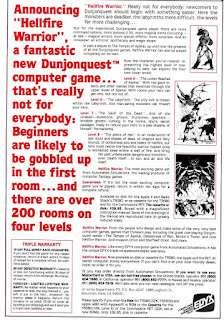 And now, God forgive me, I'm going to show another old ad. I like the tagline - "not for everybody" - clever. Here's a post about the game.

I might have mused about this before, but is anyone out there making new retro-computer dungeon crawls? For those in the know - would it be hard? I think it might be fun to create some - relatively simple games with simple mechanics for those who want to just do some old fashioned dungeon crawling.

The theme for this issue is Underwater Adventuring. I can attest to how hard it is to write underwater adventures - or at least adventure locales for my hex crawls. So much of what we take for granted on the surface doesn't work underwater. The first article, "Watery Words to the Wise" by Jeff Swycaffer, does a nice job of hitting the highlights of what does and does not work underwater. No rules, just sound advice. 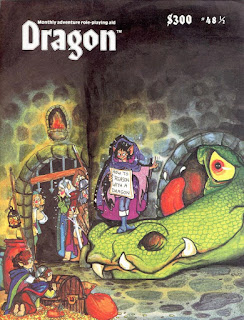 Up next is the "Dragon's Bestiary", which features the Water-Horse by Roger E. Moore, Golden Ammorite by Roger E. Moore and Sea Demon by Ernest N. Rowland Jr. Nothing earthshaking here, but solid monsters for an underwater (or close-to-water) game.

The "Bazaar of the Bizarre" is also aquatically inclined, all by Roger E. Moore.

Naturally, Dragon Magazine comes through with its annual April Fools Day supplement, this one with its own cover (for Dragon #48-1/2). Truth be told, I think I like it better than the actual cover.

This month we get a bit on the Accountant character class and a game called Real Life with a nice bit of character generation:

Back into the real magazine, Tim Lasko has a bit on fleshing out the druid called "The Druid and the DM". It's a general overview of the class as presented in AD&D, along with some suggestions for rule changes involving druid spells, many involing the use of "greater mistletoe", changing the druid's initial age and how his age works in-game (kind of weird idea - not sure why I should use it, or whether it would be worth the trouble), giving them the sage's ability to answer questions about flora and fauna (good idea, but doesn't require rules in my opinion) and a few other bits. It's a combination of unnecessary complication, rules for things that don't really require rules and ticky-tack little bonuses. Not bad, per se, but not terribly useful.

Players of Top Secret, which appears to be making a comeback these days, might enjoy "Doctor Yes", a scenario written by Merle Rasmussen and James Thompson. The scenario is set on a floating island and appears to be engaging and thorough - rules for underwater adventuring in TS, and a large complex with traps and dangers. You also get stats for such personel as Chuck Morris, Bruce Nee and "Sweetbeam" Leotard.

Michael Kelly's "Instant Adventures" is a neat article with a list of adventure types, along with the materials they require and the time involved in preparation. A few examples:

Assault/Raid (Bodysnatch), requires a small military encampment and takes about 20 minutes to set up.

Feud, Inter-family, requires a brief history of the feud and the feuding families, as well as a reason for the involvement of the characters; takes a couple hours to prepare.


At a minimum, it's a great source of ideas for games.

Lakofka's "Mission Control" article dovetails nicely with it, being a way of detemining how tough the bad guy faced by adventurers should be. In a nutshell, it is based on the total XP of the party, that determining the level of the big bad guy and how much treasure/magic items he should have. The article gets pretty wordy and "in the weeds", but the basic ideas are solid and useful. 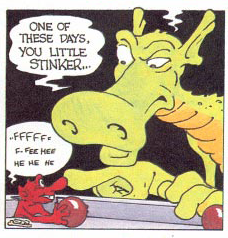 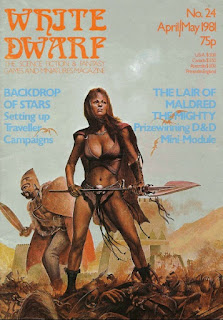 And now begins White Dwarf #24, the April/May 1981 issue. The issue starts off with a great cover - barbarian woman and a sort of Bronze Age warrior-type before a stepped jungle pyramid with dragons or pteranodons buzzing about. Good stuff. I've mentioned this before, but I'll say again that in my opinion the quality of layout and art in White Dwarf was superior to Dragon in this period. Dragon's layout was never inspired, but the cover art got much better as time went on. Both magazines are a pain in the butt to read for folks without premium peepers, but that's not their fault, just Father Time's.

The first highlight for me in this issue of White Dwarf is some a beautiful piece of art by the great Russ Nicholson: 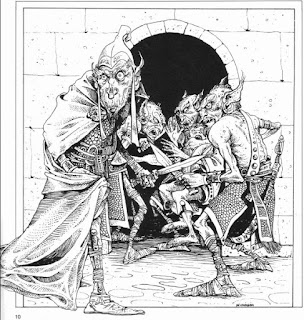 It suggests a great scenario - the adventurers captured and stripped of their toys - that's hard to implement. Most players don't dig it, and there's usually an idea that if you're putting them through it they're going to live through the experience. An assumed guarantee of survival takes the fun out of the scenario. Still, if you can find the right kind of players, it makes for a great game.

I found the review for a game called Quirks - the game of unnatural selection interesting. Ian Livingstone gave it a good review and it sounds like an interesting concept, wherein players create weird plants and animals and have to adapt them to survive changing climates and challenges. 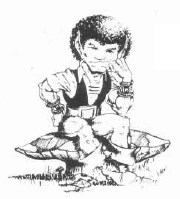 Mark Byng has an AD&D mini-module called "The Lair of Maldred the Mighty" which is, if I'm honest, kind of hard to read for an old fart like myself. Not his fault - a layout issue.

Monster Madness has a few "of the more eccentric monsters to have graced the White Dwarf letter box" - in this case the Bonacon by David Taylor, Llort by Andrew Key, Todal and Marcus Barbor, Tali Monster by Craig Edwards, Dungeon Master by Malory Nye. For fun, the DM is below in B&T format:

Dungeon Master, Medium Humanoid: HD as many as he likes; AC 16 (chainmail and judge's shield), ATK special, MV 30', SV varies, AL CE usually, Special: 30% chance he will follow adventurers around a dungeon telling them what they can and cannot do, rolls for wandering monsters when characters make any noise at all, reading of the rules (sleep spell), consults matrices and confuses attackers, not spell affects him unless you can persuade him otherwise, weapons do half damage, susceptible to bribes of 500 gp or more (treat as charm person).