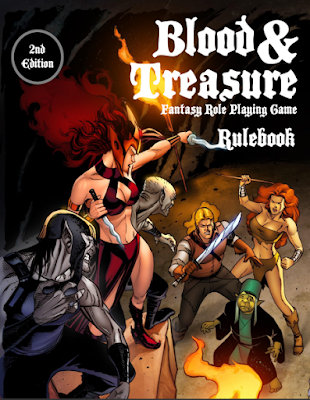 Just a quick one today, boys and girls - the Blood & Treasure 2nd Edition Rulebook is up for sale as a PDF on RPGNow.com and Lulu.com. $9.99. I'll get the hard cover and paperback version up ASAP - just need to get a review copy first.

This is a combination of player's book and referee's book, with all the classes, races, spells, rules, magic items and info on making dungeons, wilderness, settlements and other planes.

The monsters will be in a second book called, appropriately I think, Blood & Treasure 2nd Edition Monsters. I'm shooting for getting that one up for sale in 1 or 2 weeks - there's some editing to do, and I want to include some mini-dungeons as well.

Anyhow - here's the ad copy for the Rulebook ...

Blood & Treasure is the fantasy role-playing game for people who want to spend less time arguing over rules and more time playing, and the new 2nd Edition continues this tradition.

Compatible with old school games, it strives to be rules lite and options heavy.

Thirteen character classes, as well as suggested variations on the existing classes

Guidance on designing dungeons, wilderness, settlements and even the cosmos

Blood & Treasure doesn't want to tell you what kind of fantasy game you should enjoy, it just wants to put all the tools in your hands and let you play YOUR GAME, YOUR WAY

Then I'll get busy on finishing up the next issue of NOD and writing some shorter books and some blog posts.
Posted by John Matthew Stater at 6:24 PM