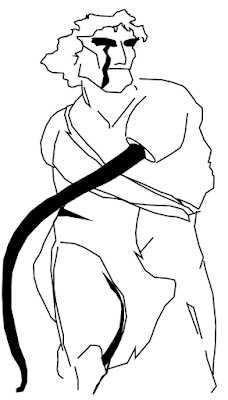 Boy, have I been on a roller coaster ride lately. Work continues on the Blood & Treasure Second Edition Monster book, but has been slow due to some medical issues. Amidst the stress and activity, I'm still editing and working on some one-page dungeons that will be included in the book. Hopefully won't take too much longer, but you can't rush these things, and medical issues certainly have to take precedence over make-believe.

In the meantime, I managed to cobble together a few new monsters for your edification and enjoyment over lunch. The artwork is my half-assed sketch of a brazen godling ...

Parrot men look very much like human beings, except for their parrot’s beak and their brilliantly hued skin, often spotted in place or marked with whorls or jagged stripes, especially on the arms and legs. They are garbed in looks tunics, perhaps to better show off their skins with which they take a terribly amount of pride, and they rarely carry more than staff slings and truncheons to defend themselves. Warriors are almost unknown among them, though some become thieves (up to 9th level) or magic-users (up to 6th level).

Parrot men are noted for a singular lack of original thinking. What they read or hear they believe and repeat until they’ve heard something new. This makes their alignments highly variable (exposure to a new alignment has a 3 in 6 chance of persuading the parrot man to adopt it), yet always lacking in conviction.

Brazen godlings are formed from the heroic frustrations of the weak and cowardly, becoming encased with demon stuff on the Astral Plane and then deposited in a sheath of bronzed flesh in the wastelands of the Material Plane. They are universally handsome and mad.

Brazen godlings attack with their fists or, when they have lost them, the black tentacles that lie beneath their flesh, for every brazen godling is really a black, tentacled demon heart encased in a tall, strong humanoid body. Attacks against the brazen godling that deal damage have a chance on a d20 equal to that damage of tearing away a bit of the monster’s outer flesh. Roll on the table below to discover what it has shed.

When head and limbs have been removed, the next attack destroys the torso and permits the demon within to be attacked directly. It has 30 hit points and the same stats presented above, save it can only be damaged by magic weapons of +1 or better. The demon heart has five black tentacles (one hidden in each limb, and one curled up in the head), which continue to ooze the creature’s black tears (see below).

A brazen godling, while it retains its head, cries tears of black ichor that have the same properties as unholy water. In melee, these tears may land on attackers, forcing them to save or fall into a terrible despair (-2 to attack and save) for 24 hours. When the being’s flesh is removed, the demon heart continues to secrete this ichor in battle.

Laserhawks are large birds of prey with scaled skin and golden feathers. They can emit laser rays from their eyes, both directed at the same target. The rays permit a saving throw, and if that is failed deal 2d6 points of fire damage to their target.
Laserhawk blood can be used to make an unguent that provides complete immunity to fire, but at the cost of one’s eyesight. Both effects last for 24 hours, even if the unguent is washed off.