Post-Apocalypse of the Gods 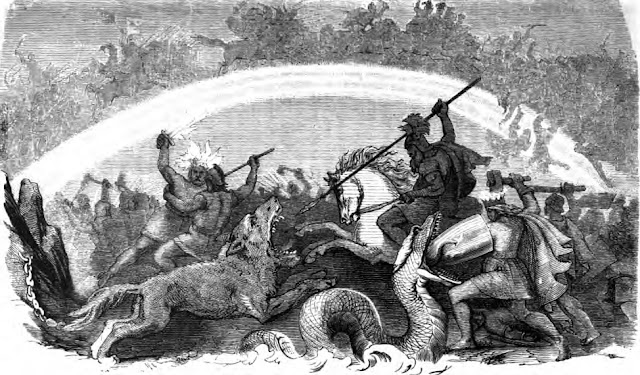 This is a notion I've had for a while, sort of simmering on the back burner. I caught an old episode of Hercules Legendary Journeys yesterday though, the one where he meets the Norse gods, and so I got to thinking about it again. What follows is a thumbnail sketch of what might make for an interesting campaign that blends D&D-esque fantasy with Gamma World-esque post-apocalyptic gaming.

If you've done any reading of the Norse myths, you are undoubtedly aware of Ragnarok - the twilight of the gods. At Ragnarok, Loki leads the giants and other bad guys against the gods, and most of the major "characters" end up dead - Thor and the Midgard serpent kill one another, Odin and Frigga are swallowed by Fenris and he is in turn killed, Loki and Heimdall kill one another. Good stuff, and somewhat unique in western mythology I think. Heck, some obscure movie studio is apparently making a movie about it.

What I always found cool about Ragnarok, though, is that although it was the end of some of the gods and results in a flood that wipes out most of humanity, it is not "The End". There is a post-Ragnarok world just waiting to be explored and conquered!

From memory - so please excuse any omissions or errors - Balder returns from Hel after Ragnarok to become the new king of the gods. I also remember that Thor's sons, Magni and Modi, inherit their father's hammer - presumably they take up where dad left off as protectors of man and god. In addition, two human beings managed to take shelter in Yggdrasil and were left to repopulate Midgard, so humans are still around.

If we play around with the concept, we can maybe make a fun campaign out of it.

On the fantasy side, we have the gods, and thus we have clerics and magic. We can also preserve at least some of the monsters of mythology - Norse mythology, of course, but monsters from other mythologies are welcome as well. Since we're in a post-apocalyptic setting, we can also throw in all the original weirdness from D&D - green slime, bulettes, beholders, as well as monsters from post-apocalypse settings - maybe Magni and Modi travel around in a chariot pulled by spider-goats?


On the science side, we can borrow from Marvel comics and use an Asgard that is as much science as it is sorcery. Some of that technology was left behind on Midgard, perhaps, but even better stuff is hidden away in Asgard if only some high-level adventurers can figure out how to get to it. The remaining gods - maybe we can call them The New Gods - now dwell on Midgard with humanity (though a bit separated, as the gods always prefer to dwell in gated communities).

Another option would be to set Ragnarok at some point in the near future, thus allowing modern technology to exist in the ruins of the world, ruins that are now visited by the primitive people who have established settlements close to, but not too close to, those ruins, to scavenge for supplies.

The campaign can be set in post-apocalypse Scandinavia/Iceland/Greenland, or you could even use Minnesota. Since the world is flooded in Ragnarok, you can use some maps that show what the geography would look like with higher sea levels - that will keep things just different enough to fool the players for a while and give them the enjoyment of figuring out what world they're exploring.

New towns and cities have sprung up, blending the old and the new. The wilderness is haunted by mutants, worgs and the scattered remnants of the giant races. Perhaps the elves of Alfheim visit now and again - let them be grey elves and beautiful and judgmental - and some of the dwarves survived the apocalypse hidden away in their mountains - let them be duergar and foul and greedy. 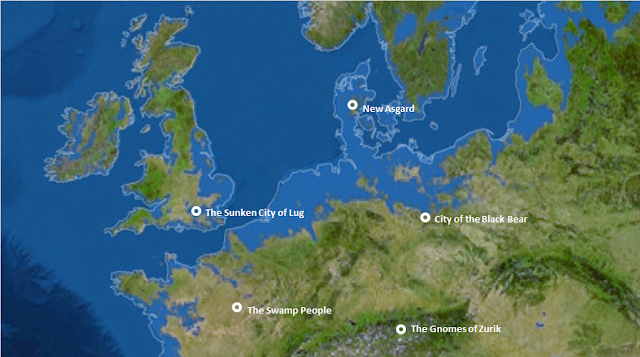 Above is a quick sketch of a campaign world, with the sunken city of Lug inhabited by mutant amphibious englishmen (use tritons to make it easy, or sahuagin to make it scary), the Swamp People of old Paris, with their giant frogs, the Gnomes of Zurik hiding away all that gold, the City of Black Bear, which can serve as a tent-pole mega-city-state with legions of warriors threatening more peaceful folk beyond, and of course New Asgard, where the gods and their servants dwell, and from which come the paladins of Balder to spread a new enlightenment among mankind.
Posted by John Matthew Stater at 10:44 AM