The Trouble with Merchants 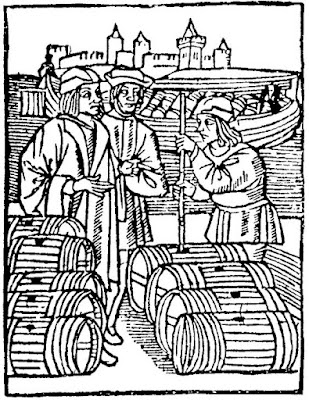 Depending on what style of fantasy campaign you are designing, merchants can be a problem. In a medieval milieu, they link villages, towns and cities together, providing important lines of communication and making items cheaper by their trade. They make maps and charts and make travel less dangerous and less mysterious. This is fine in a reality-based campaign, of course, but can present problems with a fantasy campaign.

On the other hand, merchants and their travails can be a powerful ally in building a fairy tale world of hundreds of small kingdoms, dangerous, mysterious wilderlands and, in the true Gygaxian spirit, unrealistically expensive equipment if you make them few and far between.

The real world is one in which trade may be about as old as war, or possibly older than organized warfare. In my research into the prehistoric world (i.e. pre-writing, pre-Bronze Age), I was amazed to find that stone beads manufactured in India/Pakistan had found there way at least as far as the Balkans, and that trade between groups over long distances was not terribly rare. Even when human beings had very primitive transportation - no wheels, no horses or other beasts of burden and only the simplest water craft - they managed to trade with one another over sometimes quite long trade routes. Impressive.

Of course, what those prehistoric merchants and their ancient and medieval counterparts did not have to deal with was a fantasy random encounter chart. Sure, there were storms and accidents, and probably some lions, tigers and bears, but no dragons, water elementals, genies, demons, devils or purple worms, not to mention large tribes of humanoids who might just as soon kill you as talk with you. Even a relatively weak demon or devil, immune to normal and silver weapons and with decent magic resistance, could destroy a large caravan protected by men-at-arms.

When we take these factors into account, we can make successful journeys by 0-level or low-level humanoids very rare. In fact, we can make such journeys primarily the activity of mid-level adventurers, with side jaunts into dungeons and the like along the way. Imagine if the average kingdom maybe got visitors from neighboring kingdoms (those within 50 miles, we'll say) once a year, tops. Visits from further away might occur once a decade, or once a century. People who were thought to be mythical - the two-headed purple folk of Hvaroo - might pull up one day in a large galleon loaded with spices and magic no living person in your home kingdom has ever seen, and will probably never see again in their lifetime!

By doing so, we can create a world of very small clusters of settlements - kingdoms, of course, for in fairy tales almost every ruler is a king or queen - separated by tracts of very dangerous wilderness. The settlements don't even need to be very far apart - two or three days journey with dangerous encounters in between can be enough to ruin an expedition, and each ruined expedition makes future expeditions more unlikely due to the loss of money, the loss of key personnel, etc.

Each kingdom must largely rely on its own resources, agricultural, mineral, etc., and this means you can make certain resources or items the specialty of specific kingdoms. Maybe only a few kingdoms have armorers who know how to make full plate armor, most just stick to boring old chainmail or platemail. If you want the full plate, you have to travel. Likewise, certain gemstones required by material components - diamonds are mined in Vardak and since the trade caravans and ships sent there failed to come back, you have to go there yourself to get the large diamond you need to cast the magic spell to blah blah blah. You get the idea.

Of course, we also need to ignore a little more reality and allow these petty kingdoms to develop a level of technology that would generally be impossible without trade. Hey - it's fantasy. We can fudge a few things to get the atmosphere right.

Rare trade means you get to populate your world with dozens of petty kingdoms with their own strange customs, laws and problems. Just as Australia developed some very unique animals due to its separation from other land masses, each kingdom can develop some pretty unique traits due to largely being cut off from the rest of humanity. Some random tables like the ones at Chaotic Shiny can help generate ideas - you can use unique royal titles (all hail the Grand Karnak of Carsonne), come up with one or two strange taboos (everyone knows you must not wear red in the presence of the Queen - off with their heads!), give the place something to be proud of (in Falala we have the world's foremost sage specializing in dragons ) and throw in some fun costumes (it has always been the way to wear hats upside down in Urnok), dialects, currency, cookery, etc. and travel becomes not only more interesting, but also easier to keep track of for players. A string of villages and towns that all have vaguely Medieval French names and customs might be hard to keep track of, but really odd kingdoms will stick in the mind.
Posted by John Matthew Stater at 4:31 PM