It was about seven years ago that I published Pars Fortuna, my first game. It used the Swords & Wizardry engine, with a few alterations by myself just to test out ideas for alternate mechanics. Seven years, and now it's time for a little revision.

Revising seems to be my main hobby at the moment. I've just done a 2nd edition of Blood & Treasure, so I'm now working on revising the two B&T supplements, the Monster Tome (to be re-titled Monsters II) and the NOD Companion (to be re-titled Esoterica Exhumed). That goes on apace, one piece at a time. Now I've started delving into Pars Fortuna, and it has been fun to explore that weird little book.

The idea at the time was to make a random RPG. This meant removing the races, classes, spells, monsters and magic items that we all knew and (mostly) loved, and replacing them with things that had their genesis from random generators. At the time, I described it as reminiscent of Talislanta ("no elves"). For the most part, that's what I did. Random classes just were not workable at the time, though I later developed a random class generator. To deal with classes, I went the race-as-class route. Random spells had the same problem, so I just rolled randomly on some lists of OGL, but non-SRD, spells.

Now I'm revising, and that means re-reading, and I'm amazed at how much I wrote that I do not remember writing. A couple of the races receded from memory and were nice surprises to me now. Many of the monsters were forgotten, and now I'm realizing how much monster art I'm going to need.

In Pars Fortuna Revised, I'm going to bring the rules more in line with what will be, next year, a revised Bloody Basic. Mostly just messing with saves and skills - nothing earth shattering. The race/classes will get some more options (essentially a warrior, skill monkey and magician class for each race). Pars Fortuna's spell system will remain intact, and I'll add in a few extras that I created after it was published and maybe a few things that have been bouncing around my head for a while. 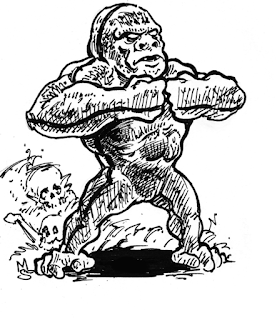 Speaking of art ... art was the weak spot for me when I wrote Pars Fortuna. At the time, I had zero budget to work with, so I convinced my wife that sinking $120 or so of our money into this silly project was a good idea. I contracted with Jon Kaufman to give life to the bizarre races in the setting, and I still remember the feeling of absolute delight when I got that first illustration (at the top of the post) from him. It's still one of my favorite things ever from my years of commissioning art for games.

And then came the monsters. I tapped a fellow named Michael Stewart for a few pieces (gongthrottle over to the left is among my favorite, but the hamazak and qward are also awesome), as well as Russ Nicholson (who I'm proud to say is now working on a cover for B&T Monsters II) and Rhiannon McGuiness (who did the delightful illustration of ouphs). All great illustrations, but ... there were so many more monsters to be illustrated! Almost all of the monsters in the book are original (to some extent), but I didn't have the money to commission more art for them. Seven years later, I have a bigger budget to play with, so I plan to commission quite a few more monster illustrations. Here are a few that are on my list of potential targets for illustration:

Arahkhun - giant racoons, as big as bears and excellent grapplers

Armadillox - armadillos the size of oxen and used as draft animals; a cakrol (pangolin man) mounted on an armadillox would be just dandy!

Opur - penguins the size of orcas, filling a similar niche

Woin - sleek wolverines with skin membranes that allow them to glide

Mercurial - animated mercury in the vague shape of a rat

Sanctus - animated statue of a saint

Nine - furry humanoids that look something like otters or seals, but with four eyes; extremely fast

Goon - evil underground humanoids who wear crowns and cause trouble

Ingalas - amazon nymphs of the jungle

Dreak - look like polliwogs with the faces of human children; lake predators

Lady-of-the-depths - plant that uses illusion to look like a dainty woman; enslaves people with tendrils, who then serve as her handmaidens

Sand rat - scaled rats with sapphires embedded in their foreheads

Nokt - evil spirit that looks like a five-headed green crow

If I can manage to commission a third of these, I'll be pretty happy. If I can do more than that, I'll be ecstatic. If you have any favorites from the list above, let me know in the comments.

I'm thinking of doing a separate setting book for the game, and both rule book and setting book (if I do separate them) will have adventures in them as well. Should be a fun project, and a nice chance to resurrect one of my first attempts at making games.