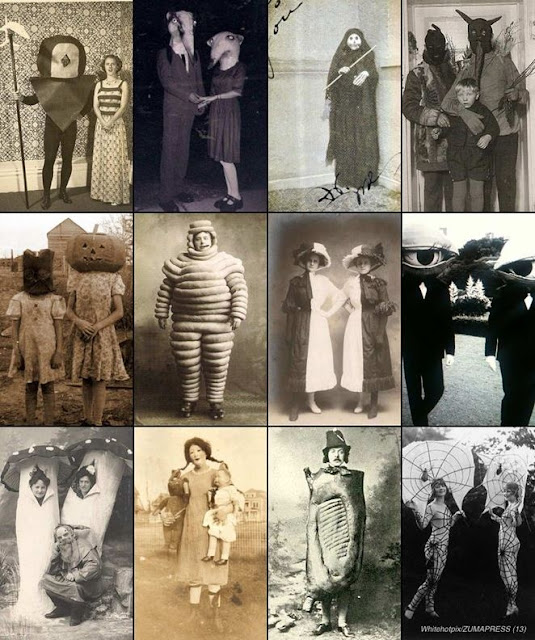 Creeps are a breed of being akin to the fey. While there are many sub-species (so to speak), as one can see from the picture, they all have one thing in common – a love of fear. All creeps feed on emotions in one way or another, so they have a tendency to pray on the weak (i.e. folks who tend to fail saving throws).

Sparoos appear as bird-headed men, always dressed in silks and satins and always armed with spears. They are lightning fast in combat, and fight in a flashy, bounding style while their bird eyes dart back and forth, their heads cocked to the side in a manner quite offputting, as though the head and the body are not entirely in league with one another.

Sparoos feed off courage and grit, and they have the ability to inspire combatants to get in over their head. When combat begins, a sparoo points its spear at a foe and cocks its head in a sort of challenge; the target must pass a Will save or duel them, shouting at others to stay out of the fight and even turning on allies who attempt to assist them.

Snozzles are rather thick (in terms of a lack of intelligence and in terms of powerful muscles and sturdy bones) humanoids, with elephantine trunks. Their large eyes allow them to see through illusions (+3 to save) and invisibility (invisibility works as the blur spell against snozzles).

Each round, they can either use their trunks to slap their foes (up to 3-ft range) or exhale one of the following spells: Glitterdust (at will), obscuring cloud (3/day) or cloudkill (1/day).
Snozzles feed on pity. They always pick on the weakest member of a group (they can sense this innately); those witnessing this must pass a Will save each round or attempt to defend the target of the snozzle’s attacks, placing themselves between the snozzle and their victim and always fighting defensively.

Wall hags are born from despair, germinating within the walls of places that have known not only sadness, but hopelessness. They dwell in the walls, moving in and out of them as though using a meld with stone spell (works on wood but not metal).

Wall hags despise metal, suffering +1 points of damage when struck with bronze weapons, +2 from iron and steel weapons and +3 from adamantine and mithral weapons. They exude a terrible chill in a 10-ft radius that affects metal per the chill metal spell and sentient creatures per a chilling touch spell; creatures and items must save against this effect each time they enter the aura, though not each round they spend in the aura.

Wall hags feed on despair and hopelessness. Each time they are missed in combat, and each time they pass a saving throw, they gain the ability to weave a magic-user spell; the first time, this is a 0-level spell, the second time a 1st level spell, and so on, the ability capping at 3rd level spells. Those who miss the hags or fail to hit them with their spells must pass a Will save or suffer one point of charisma damage.

Hoods are rotten bullies, appearing as humanoids wearing black hoods. Males have horns on their hoods, while females do not. Hoods have no faces or heads beneath their hoods, and delight in raising their hoods and freaking people the heck out.

When a hood raises its hood, all within sight must pass a Will saving throw or go into fight or flight mode. The adventurer can choose the effect – either they become frightened and flee or they go into a fury (+2 damage, -2 AC). Hoods are expert at avoiding the clumsy attacks of a person in a fury, and each time a person misses them with an attack, they lose 1d4 hit points. Once a person has lost 10 hit points from their flailing about, they must pass a Fortitude save each round or become fatigued (see conditions). Once a person is fatigued while fighting a hood, they suffer 1 point of constitution damage each round they continue to fight.

Once a hood has worn a person down, they make quick work of them and soon are feasting on their heart.

Pompions look like humanoids with great pumpkin heads. They are kin to the jinks (see Part 2, tomorrow), and if encountered alone probably (65% chance) have 1d6 jinks with them.

Pompions are surrounded by a 30-ft. aura of shadows, the only illumination within this aura coming from the flames within their devilish heads. When they make these flames crimson, they can breathe a 10-ft. cone of flames each round that deals 1d6 points of damage. When their flames are emerald, they allow the pompion to exhaule a stinking cloud that follows them about in a 10-ft. radius around the pompion. When the flames burn yellow, the shadows around them rear up into frightening shapes, forcing those within the shadows to pass a Will save each round or become frightened. A pompion can only maintain a color of flame for a maximum of three rounds during a single fight.

When creatures are frightened by a pompion, they suffer 1 point of wisdom damage per round. Each frightened creature within a pompion’s aura of shadows grants the pompion a +5% to magic resistance and 1 point of damage reduction from each physical blow they suffer.

Gumbles look like … oh heck, they look like the Michelin Man. Their hides are thick and rubbery (as in literally made of rubber), and absorb the blows of bludgeoning weapons. When struck with a bludgeoning weapon, the gumble suffers no damage. The striker rolls damage anyhow; the damage value becomes a penalty to a Fortitude save which, if failed, results in the striker being knocked prone and suffering half the damage they would have caused to the gumble.

Gumbles can jump (per the spell) at will, bouncing off walls and ceilings as they do. People watching this must pass a Will save each round or begin giggling and laughing; the gumbles feed off of this amusement, their foes suffering 1 point of intelligence damage each round, and the gumble gaining 1 point of damage reduction from physical attacks for each point of intelligence damage their antics cause.
Posted by John Matthew Stater at 2:45 PM