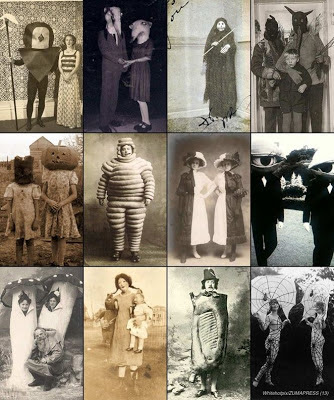 Today I have the second installment of the Creeps. Enjoy!

Geminettes always appear in pairs, with cold, calculating eyes and graceful forms. In combat, they attempt to maintain contact with either their white or black hands; while in contact, they suffer a -2 penalty to hit and a -2 penalty to AC, but gain 25% resistance to magic and can only be harmed by silver and magical weapons.
When a geminette strikes with its black hand, the effect is per a chilling touch spell. When it strikes with its white hand, the effect is per a shocking grasp spell.

All creatures within 20 feet of a pair of geminettes find themselves becoming conflicted. In any round in which they attempt an action, they must pass a Will save. If they fail the save by 1 to 5 points, they hesitate and do nothing during that round. If they fail the save by 6 or more points, they decide to do the opposite of their desired action (or, if “the opposite” simply does not make sense, then nothing at all). Whenever such a save is failed, the adventurer suffers 1 point of charisma damage and the geminettes gain a +5% bonus to their magic resistance.

Awful eyefuls consider themselves the nobility of the creeps. They always dress well (whatever era they are found in), and they have the ability to mask their true appearance with that of a vaguely handsome man.

Awful eyefuls walk among mortals, causing them to feel envy and feeding off their petty (and not so petty) jealousies. All creatures within sight an awful eyeful must pass a Will save anytime they see another person doing something they cannot, or doing at a higher level than they can. If they fail this save, they become intensely jealous, suffering a point of intelligence damage and immediately spending a round attempting to outdo that person.

As awful eyefuls feed, they gain the following special abilities:

INT DAMAGE INFLICTED: ABILITIES GAINED
0-2: None
3-5: Detect thoughts (ESP) at will and +1 bonus to hit, damage and AC
6-8: Steal the fighting ability or skills of one creature per round within 20 feet; this translates into applying a 3 point penalty to an opponent’s attack bonus or skill bonus and gaining a like bonus themselves
9+: Steal the spellcasting ability of one creature per round within 20 feet; the awful eyeful steals one spell from an opponent and gains the ability to cast it one time.

Swamms appear as dancing mushrooms, surrounded by a sparkling cloud of spores in a 10-ft. radius. Folk who breathe in these spores must pass a Fortitude save each round or find themselves becoming sluggish and lazy. This translates into a -1 penalty to hit and to AC, and a -3 penalty to base movement, as well as 1 point of charisma damage. The loss of charisma represents a loss of ambition. Creatures that have lost half their charisma score to a swamm’s spore cloud are affected per a sleep spell. Each time a victim of a swamm suffers a point of charisma damage, the swamm heals 1d3 points of hit point damage.

Mad mums feed on love and the desire to protect loved ones. Mad mums never speak, and in fact appear to hate loud noises of any kind. They appear as plastic faced women holding dolls. These dolls are their murderous moppets, dirty-faced, greasy-fingered tots that, when thrown by the mad mum, animate and attack, fighting as well as gnolls.

The touch of a mad mum returns people to an infantile state (per the confusion spell) if the target fails a Will save. Gestures of love or protection made in front of a mad mum force the protector to pass a Will save or become obsessed with the creature they are trying to defend. They suffer 1 point of intelligence damage, and find themselves unable to move more than 3 feet away from the object of their obsession, and they do nothing but fight defensively, lending their bonus to AC to the person they are trying to defend.

Tucks appear as dancing bits of meat. They appear before hungry people, dancing about, taunting them. All tucks operate under a displacement effect (per the spell), making them difficult to catch or hit.

Their taunting of the hungry causes desperation and frustration, which they feed upon. Each time a person attempts to hit or grapple them and fails, they must pass a Will save or suffer 1 point of wisdom damage. Each time this happened, the tuck gains 5 points of movement and increases its AC by 1 (to a maximum of 60 feet per round and AC 20).

Lob-lollies appear as spidery women in webbed outfits. They carry similarly webbed parasols, which they use to deadly effect in combat. With each step they take, they send out a web of psychic energy through the ground, forcing all within 10 feet to pass a Will save or be held (per hold person) for 1d4 rounds.

Lob-lollies can walk on walls and ceilings (per spider climb). They can spin their parasols in combat, causing a hypnotic pattern (per the spell). While holding their parasols and able to move, they enjoy the benefits of the protection from normal missiles spell.

Lob-lollies always laugh gaily as they fight, and their moves are sensuous. Males and some females watching them them must pass a Will save each round or become loathe to attack them (-2 penalty to hit, 1 point of wisdom damage). If a person loses half their wisdom to this effect, they attempt to defend the lob-lolly, trying to win their affection (and impossible task). Each time a person loses a point of wisdom, the lob-lolly regains one lost hit point. 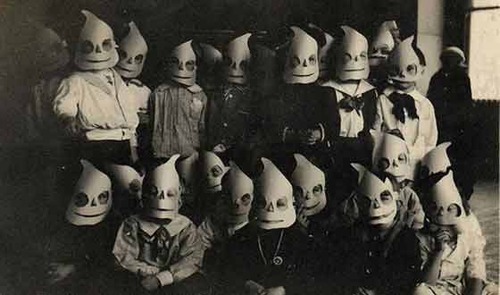 Jinks are goblin-like creeps that look like children wearing grotesque masks. They gather in gangs in dark places – they even enter settlements at night – and prey on the fears and superstitions of people. They generally lurk in the shadows (hiding as well as a 6th level thief) and use their spells to unnerve people. Anyone failing a saving throw against one of their spells also suffers a point of wisdom damage (or 1d4 points of wisdom damage if they succumb to the jinks’ cause fear spell) as they become more jittery and prone to fright. A person who has lost half their wisdom to the jinks spells must pass a Will saving throw each round or become frightened for 1 turn. For each point of wisdom damage caused by a jink, it gains a +1 bonus to hit and damage for the remainder of a fight.

Posted by John Matthew Stater at 8:36 AM