On Almanacs and Thin Ice 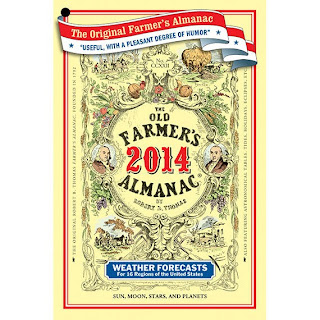 Once upon a time, I was suffering through an earache and a bit of a cold. I had an earache as a baby, and the doctor told my mother I would be susceptible to them for the rest of my life, and he wasn't wrong. I'd usually get once about once a year, and they'd last about a week.

Anyhow - the ear pain would spike in the evening, and I'd seen some goofy commercial on TV about home cures that included using a hair drier to dull the pain of an earache. So there I was, lying on the couch, aiming a hair drier at my ear (it worked, by the way, and still does) and reading a book I'd picked up at the grocery store earlier that day on a whim - The Old Farmer's Almanac. It was chock full of interesting things to read, and I've been a subscriber for many years, the book becoming more valuable once I started growing vegetable gardens.

Believe it or not, The OFA isn't a bad book to have around if you're a gamer. The back section of the book is full of interesting tidbits about the natural world, and as a subscriber, I also get a reprint of the OFA from 100 years ago and 200 years ago - right now, I'm looking through the 2014, 1914 and 1814 OFA's. If you're running a game set in the early 19th century in the United States, those 19th century Alamanacs could come in quite handy.

One interesting thing I found in the almanac tonight was a bit on ice thickness - in particular, how much weight, in general terms, ice could hold based on its thickness. This brought to mind the usefulness of a random ice thickness table for referees running games set in the frozen north, or in more temperate climes under the grip of Old Man Winter.