It's August 1979, and you're standing in front of a magazine rack. Which magazine do you choose?

Well, too bad. I'm not reviewing Playboy (more's the pity). You're going to have to be happy with The Dragon #28.

We open this issue with this:

"It is fun to be unique. It is fun to be part of something unique. Sometimes, though, some of us forget just how strange all of this stuff is to the uninitiated. In the eyes of the mainstream of contemporary culture, what we do — play “games” — is decidedly different. Some would even
call it strange ..." 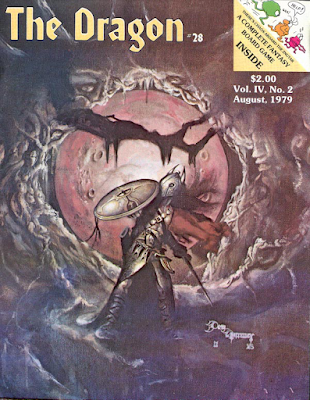 Kask ain't just whistlin' Dixie. The funny thing is - as much as Gary and Dave's little game has influence modern video games, those of us who still play the pen & paper varieties are still considered strange. People I work with are always a little surprised - not sure quite how to react - when I mention that I write role playing game books. Interesting to hear in the comments how many of us are "open gamers".

Well, this issue opens up with a biggee - "The Politics of Hell" by Alexander Von Thorn. Van Thorn has an author page at Amazon.com, and (if it's him) a Twitter account. If you have any questions about Hellish politics, feel free to contact the author directly.

The first line is: "Author’s note: The following article cannot be considered the official doctrine of either Advanced Dungeons and Dragons or the Roman Catholic Church. However, it is compatible with AD&D, and except for the parts about Asmodeus it is not in conflict with works on demonology as generally accepted by Catholic exorcists, thus enjoying tacit approval by the Church." You know, just in case you were worried about your AD&D game rubbing the Catholic exorcists the wrong way.

The article pretty much sets up the political landscape of AD&D's version of Hell, as we came to know it through the Monster Manuals, with Asmodeus on the top of the heap. It also includes stats for Satan, Belial, and Astaroth (with art).

Next, Jake Jaquet presents The Dungeon Master's Guide - possibly the most useful RPG book ever made. The article is a collection of comments and reminiscences by people who were involved with the project, including Jeff Leason, Len Lakofka, Lawrence Schick, Jean Wells, Allan Hammack, Mike Carr, James Ward, Darlene Pekul and Gary Gygax, in an exclusive interview with The Dragon (I'm sure it was quite a coup to land that interview!)

Up next, Dan Bromberg writes "A Short Course in D&D". This is an interesting article about folks at Cranbrook Prep School setting up a 2 week course in D&D for incoming freshmen. They ended up charging $1.50, plus another $1.50 for low impact dice (the DM didn't have to pay). The course books were a copy of Basic D&D and the Player's Handbook. Given the fact that I still find rules in AD&D I didn't know existed, a course like this might have been useful to me when I was a kid.

Time for some war gaming - "The Cavalry Plain at Austerlitz" by Bill Fawcett. This is a nice description of the battle that pitted the cavalry of Napoleon's France against Austria and Russia. It is followed up by an article on "Simulating the Cavalry Plain", also by Mr. Fawcett. He gives a nice overview of the order of battle on both sides, along with victory conditions for each side. Highly useful for folks playing Napoleonic war games.

I didn't get interested in the Napoleonics until I started reading Military History magazine in college. Now I'm super excited to get GRIT & VIGOR published so I can write up a Napoleonic supplement to it.

Next up - alignment time! Gary Gygax opines on Evil: Law vs. Chaos in "From the Sorcerer's Scroll". In this, he defines the characteristics of Chaotic Evil and Lawful Evil ... and then let's Neutral Evil fall where it may. He defines "evil" as the desire to advance self over others by whatever means possible, and always by the foulest means possible (emphasis mine). I like this, because it makes no qualms about what evil characters are in AD&D - they're villains. They're not misunderstood, and they're not necessarily realistic depictions of human beings. Just theatrical villains you can take some enjoyment in beating the crap out of (or in playing, if you're in the mood to foreclose on orphans and tie maidens to railroads). The Law vs. Chaos element is the desire to create a world ruled by evil vs. evil for its own sake. Now you know. 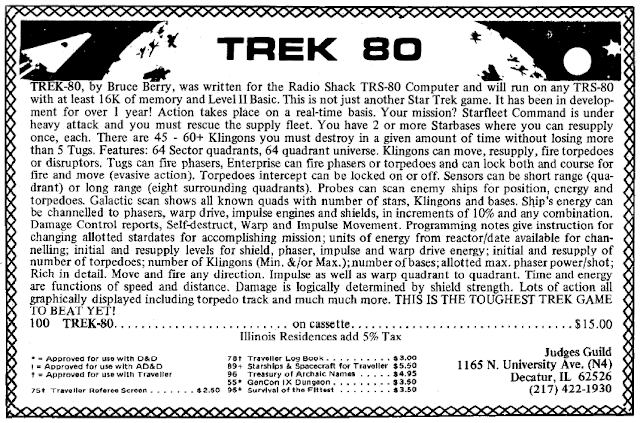 Looks like Judge's Guild got into computer games early. The only thing I can't figure is whether or not this was a licensed game. Here's the article on the game at Wikipedia ... and here, apparently, is a clone ...


Allen Hammack writes "Six Guns & Sorcery". If this sounds familiar, you might remember it from the old DMG, where they provided guides for conversions between AD&D and Boot Hill and AD&D and Gamma World. If you need a quick bravery stat, you can use the following:

Subtract the following from 100 for each class:

Maybe more interesting are the damage dice for some Old West weapons - Derringers do 1d4 damage, other hand guns do 1d8, shotguns do 1d10 and dynamite sticks do 4d6 damage. With these values, I wonder why they were so worried about including firearms in D&D.

Phil Neuscheler now writes "Fantasy Smith's Notebook". This was intended as a series of articles concerning the modeling of miniatures for D&D.

"When you have small amounts of cash to start with, you may wish to get adventurer character figures first, and use a substitute for monsters in your miniature games. After all, you will continue to play your own character(s) no matter what kind of monsters you encounter, so you’ll use the character figure more often than any individual monster. Monsters are simply not cost effective."


The article provides contact information for several miniature makers active at the time. I wondered how many were still in the business today:

U.S. Airfix - I remember these guys making airplane models - maybe snap-together models. They still produce figures, though I'm not sure they have any ancients or medievals anymore.

Archive Miniatures - These guys appear to be defunct.

Grenadier - These folks appear to now be owned by Mirliton. Free downloads at the link.

Ral Partha Enterprises - still around, and pushing the resurgence of Chaos Wars. I always wanted to get into these minis when I was a kid, but the money just wasn't there.

Next up is "Armies of the Renaissance - Part IV The English" by Nick Nascati. This covers the Welsh longbow and its importance to the rise of English military power, as well as their deadly combination of bill, pike and musket. They wore less armor than other armies, but appear to have had a high level of discipline. Also notable is the adoption of the red coat in the late 1600's.

You might remember Lance Harrop from last week's installment of Dragon By Dragon - this week we're looking at his "Elvish Tactics in Fantasy Miniatures". Not surprisingly, elvish tactics are all about speed and maneuverability. Lance gives us the following order of battle:

As always, Mr. Harrop gives a few notes about elves:

* They use silver to denote rank, not gold
* They do not use red or black leather
* High elves wear blue and white, middle elves green and white, low elves dark green and tan, sea elves sea green and sky blue and dark elves browns and blacks
* Elves are concerned with having a unified front

Next, Gygax sounds off in Up On A Soap Box - in this edition, on manufacturer conventions. You can imagine how fascinating this article is 35 years after it was written.

In Out on a Limb, we present this week's Great Moments in Nerd Rage:

"This brings me to a point that I didn’t want to write about when I started this letter: spell points. I HAVE HAD ENOUGH OF FORGETTING SPELLS!!!!!!!" - Mark Jacobs

"Gee, it’s always so much fun getting letters from unproven critics who think they have some inner track on “the way of things.” As to what may or may not be absurd, let me say this; if you don’t like it, why give me all of this grief? D&D has always made a point of being nothing more than guidelines for structuring a game, and stating so."

"Your argument that healing is too slow is specious, and naive. You obviously have never been in a combat situation yourself, nor have you apparently even participated in something such as the Society for Creative Anachronism’s mock battles."

We now have another installment of The Voyages of Exploration Ship Znutar. An excerpt: 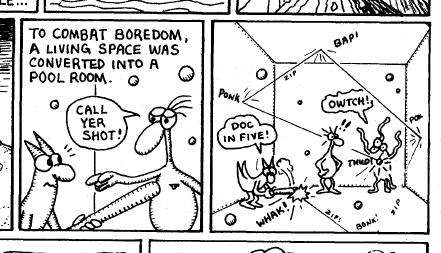 We have next a full board game by Tom Wham - The Awful Green Things from Outer Space. I won't go into much detail here - the rules look pretty simple, the game is tied in with Znutar above, and I love that they used to do things like this in The Dragon.

Len Lakofka's Bazaar of the Bizarre presents Potions of Forgetfulness, Rings of Silence, the Horn of Hadies (their spelling, not mine), the Chime of Warning, the Apparatus of Spiky Owns (a play on Spike Jones, God bless him), Leomund's Plate and Cup, and a slick little guide for generating random magic-user spell books. To whit: 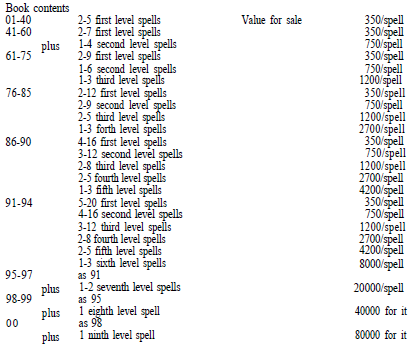 "Giants in the Earth" time! Lawrence Schick and Tom Moldvay (my hero) give us the following literary giants given AD&D stats:

Leigh Brackett's Eric John Stark (15th level fighter) - I have to admit, I was bored to tears by the one Eric John Stark book I read; they also include stats for Northhounds (4 HD)

James M. Ward now gives us "Monty Strikes Back". He was the original Monty Hall Dungeon Master, you might remember, who gave out tons of great treasure. This is another story of a game played with many of the early entrants into the hobby.

"We were on a winter level tonight and were far from pleased. It was Friday, one of our usual D&D nights and we were going down into a refrigerated level of Monty’s that we had found weeks before. We had all made fur coats for our figures and most of the group was going down. Robert, Jake, and Dave (I) (Tractics boys through and through) were going down as their 20th level fighters; Brian (a tractics lover too, but a fanatic on Western Gunfight) was going as his 21st level thief/fighter/cleric dwarf; Ernie, Dave (II), and I were going down as wizards of the 18th level (just little guys); Freddie was his stupid high level sword carried by a flesh golem from Jake’s golem squadron; Tom and Tim went as druids (probably because they liked all types of herbs)."

In "The Dragon's Augury", we have reviews of Divine Right by TSR, Sorcerer by SPI, and a book, America B.C.: Ancient Settlers in the New World by Barry Fell. Still for sale at Amazon, and four stars!

"The Dragon's Bestiary" gives us Jake Jaquet's Slinger. Here are the basic stats in B&T format:

These little buggers, which look like iguanas, can throw their tail spines about 20'. They are vulnerable to fire.

Fineous Fingers, Fred and Charly are stealing a Palantir in this issue.

And that wraps up issue #28. It's always nice to leave with a song, and since Spike Jones was mentioned ...

Posted by John Matthew Stater at 10:53 AM