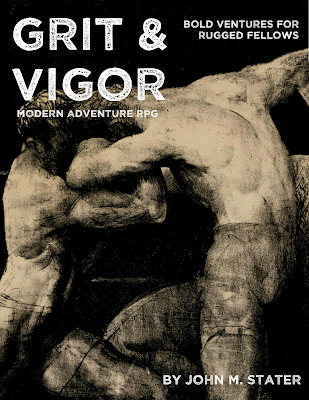 Over the past weekend, I finished Grit & Vigor. Okay, 99% of it. Just need to rewrite an intro and do an appendix on how it can interact with Blood & Treasure. My first round of editing is done, though, and I have to say I'm pretty jazzed. When I write these things, I often write (and re-write) them in pieces, somewhat in the way movies are filmed. Reading through it to edit it was the first time I'd really look at it from cover to cover, and overall I was happy for two reasons:

2) I kept statting characters in my head, and they made sense with the rules I'd written

G&V has been a pretty long time coming. It started life as Action X, but I never really liked the name and the game, as it stood then essentially a reworking of the Modern SRD into a more rules lite vehicle, had no soul. The shift to Grit & Vigor and "manly adventure stories" helped quite a bit - gave the game some direction and made it more fun for me.

What I thought I would do with this post is give a somewhat extensive "table of contents" for the game, so people could see what it looks like currently. My comments are in brackets. Here goes ...

I. Rugged Individualists: Creating Your Character

... Ability Score [the basic six - you know them]
... Character Backgrounds [this replaces "race", and consists of random rolls on tables to determine the four big moments in your character's young life, and the feats or knacks or ability bonuses that go along with them]
... Character Classes
... ... Fighters [with sub-classes Boxer, Commando, Dragoon, Dreadnought, Duelist, Gunfighter, Man-At-Arms, Ranger, Samurai and Sapper]
... ... Brain [with sub-classes Archaeologist, Gentleman Detective and Inventor]
... ... Rogue [with sub-classes Assassin, Gentleman, Grifter and Gumshoe]
... ... Daredevil [with sub-classes Ace Reporter, Barnstormer, Big Game Hunter, Cowboy, Gearhead, Jungle Lord, Medic, Spaceman and Vigilante]
[The sub-classes are all really just variations of the main class, so they're pretty simple for the most part and don't take up much room]
... Feats [more integral to G&V than B&T]
... Character Details
... ... Alignment
... ... Drives and Hungers
... ... Personality and Description
... ... Patrons

II. Tools of the Trade: Gear and Gadgets for the Adventurous Man
... [this includes weapons, protective gear, artillery, miscellaneous gear and vehicles] 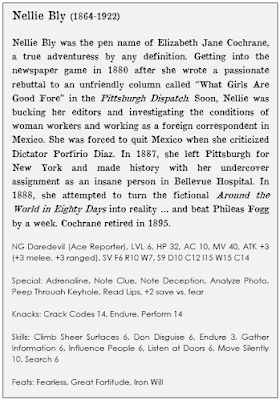 IV. Bold Ventures: Designing Adventures and Campaigns
... Genres: Crime, Espionage, Expeditions into the Unknown, Horror, Kung-Fu, Mystery & Suspense, Siege, War
... Timeline of Adventure: this covers the decades from 1880 to 1929, with notes on the overall happenings of the decade, fashion, adventure ideas, the price of gold and silver and then a year-by-year timeline of events that lend themselves to the game (wars, robberies, expeditions, discoveries, inventions) and stats for weapons and vehicles (and other things) introduced in that year, and some NPC stats worked in (see example to left)

V. Men & Monsters: Fearsome Foes to Fight and Conquer
... [the typical monster section, with an emphasis on animals and humans, but some cryptids and science-fantasy stuff thrown in as well]

Appendix A: The Supernatural
... [the book includes mentions of the supernatural throughout, especially in the Men & Monsters section, but I decided to separate the supernatural rules from the main rules in this appendix so people would understand that they are truly optional]
... Psychic Phenomena [rules for the chances a character is psychic, and list and description of psychic powers]
... Supernatural Sub-Classes [Occultist, Psychic and Vampire Hunter - all sub-classes of the Brain]

So that's the book, as it now stands. There's some more layout work to do, a bit more playtesting to do, and a bit more writing to do. At the moment, it looks good for a Fall release.
Posted by John Matthew Stater at 11:52 AM