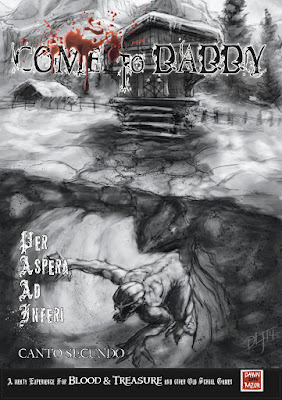 Hey folks - just a quick note this morning to direct your attention to a new, FREE, 80-page adventure for Blood & Treasure by Anders Hedenbjörk Lager. This guy does good stuff, and with a price like FREE, how could you lose.

It's called Come to Daddy, and it is part two of the Per Aspera Ad Inferi trilogy and is the follow up to No Country for Old Men, which was excellent. Here's a blurb:

“The battle with the barrow-draugr had taken the most of our energy, and we barely escaped with our lives. The gnome was sorely injured in the leg and everyone was frozen to the bone. The horses and most of our supplies were still left in the draugr cave, where we had to abandon it to save our hides. Times looked bleak and despair had set in for real when Halross shouted:

A farm out here in the outback? Strange, but in our current situation the prospect of a warm fire and some hot soup seemed like a gift from heaven. Slowly, we started our descent alone the snow filled slopes towards the cosy farm.”


Boys and girls, we're talking about crazy viking mutant cannibal killers. If you don't want to sink your teeth into that, I don't know why you're here.

Let's get into some specifics. The book looks great - good layout, art, etc. There are some nice pieces by David Lewis Johnson, and everything is clear and easy to read.

The adventure itself may be tricky to run, and is a bit different than many you have played. You have a family of cannibals attempting to lull the characters into feeling safe on their farm, and then slowly picking them off, one by one, using all manner of tactics. You'll have to set this one up properly - it has to seem as though the farm is a safe place and a curiosity, rather than a side adventure. This is one that might kill off characters, so make sure you have a group of players that know its a game, know the character is a piece of paper, and enjoy the challenge. The adventure is designed for characters from 4th to 6th level.

As for exploration, you have a wooded valley and the farm, along with a farm house and tool shed, as well as an entry into the Nightmare Realm. There is an old ruin of the temple used by the nightmare cultists, and all manner of frightening things to encounter there. Ultimately, the PC's need to defeat the Mother of Lies, and this isn't easy. If the players are very determined, they'll probably have to settle for survival and getting the heck out of there.

Besides the adventure, you also have many extras - The Ritual of Banishment - a form of ritual magic used to defeat the Mother of Lies; a few monsters, many unique (such as the aforementioned Mother of Lies, a were-worg, "the severed ones" and multiple ghösts) and rules for horror and madness (with some great random tables), some new traps, new magic items and spells, alternative healing rules, and rules that expand the poison (and drugs) in Blood & Treasure very nicely. Honestly, if you play B&T or just like it, you'll get plenty from Come to Daddy even if you never play the adventure.

Seriously, Anders is knocking it out of the park with these babies, so please check them out and give them a play through with your group, whatever system you play. He also has a version specifically statted for Swords & Wizardry as well, and of course either will work with any old school game system.

Come to Daddy gets my absolute highest recommendation! Download it HERE.
Posted by John Matthew Stater at 9:08 AM