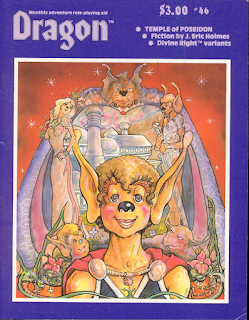 Happy Easter boys and girls. I hope you have a good one - family, friends, fun and a little time for relaxation and meditation. Hopefully, you also have some time to read this review of Dragon 46 (and White Dwarf 23).

I'll level with you here. The first time I saw this cover, I didn't quite know what to make of it. There are a few other "cute" Dragon covers, but this one sorta took the cake. It's not a bad cover, though, and actually relates to a new comic in this issue - Pinsom by Steve Swenston. It's a style of fantasy I always digged, and one which I wish had had more coverage in Dragon. Check the end of the article for another glimpse of Swenston's work.

First up - an advertisement (no, not for anything I did) 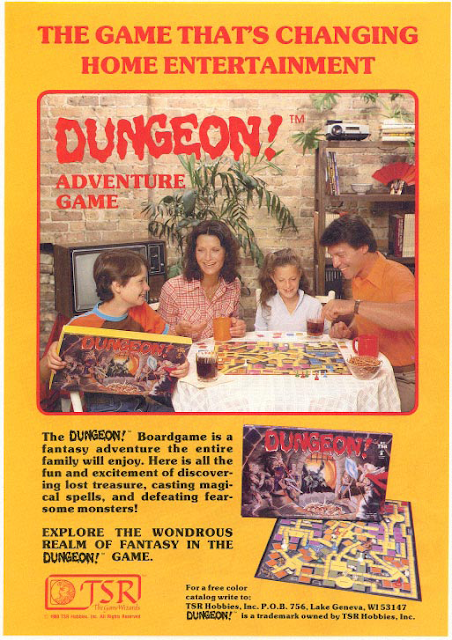 In all seriousness, if you've never played the game, I highly recommend it (at least, the old version that I used to have - I don't know if they done any crappy re-imaginings lately). It just occurred to me that it might be cool to combine Dungeon! with Talisman - at least, with the "classes" in Talisman.

The first bit of content in this issue is a short story by J. Eric Holmes, "The Sorceror's Jewel" - so always worth a read. Great art by Roslof to go with it! Here's a sample (of art and text) ... 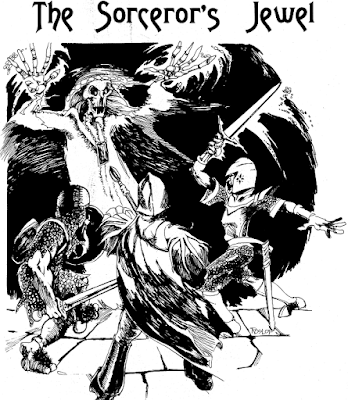 "When Tarkan departed from The Green Dragon, only minutes later, Zereth pushed
Boinger off the end of the wooden bench on which they both sat. “Follow him,” he ordered, “and be secretive about it.” It was midnight when the little thief returned. His elven companion had left the tavern common room and gone upstairs to the rented room the two shared, but when Boinger roused him he dressed and came down. The noisy crowd at the bar and fire served their secret purpose better than whispering in their room, where ears might be pressed to the adjoining wall."

That image to the right just screams D&D to me, and the story does as well. I'll admit I'm not much of a reader of the fiction in The Dragon, which I should probably remedy at some point, given that I dig Gardner Fox, Homes and Gygax. More importantly, It would be interesting to glean some bits of useful lore from the stories that ostensibly come from actual gameplay.

Here's another Roslof from that issue: 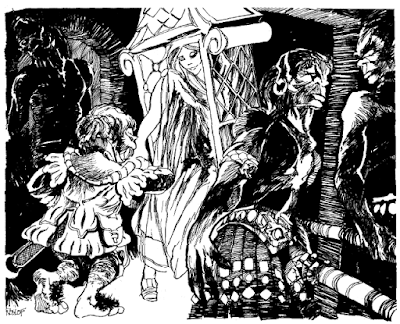 This issue goes pretty heavy into variants on Divine Right (which I don't have) and touches on The Tribes of Crane (which I never played). I mention this in case people have do have or have played those games want to check out the issue.

The "Dragon's Bestiary" features the Gaund by Ed Greenwood. Greenwood's monsters are always well thought out, and seem to point to the direction in which games were moving at the time, which I guess you could call fantasy realism.

I'm more enthused about Roger E. Moore's "This Here's Tyrannosaurus Tex", a Boot Hill Scenario based on The Valley of the Gwangi.

For those who do not know of The Valley of the Gwangi ...

Among other things, the article includes a hit location chart for the t-rex ...

Also this handy guide to killing a t-rex with dynamite


Paul Montgomery Crabaugh follows up with another Boot Hill article, "How to ease the Boot Hill identity crisis". I love the first paragraph ...

"Everyone seems to have a place in Boot Hill except the player-characters, who have to be content with a place on Boot Hill. They wander in out of nowhere, invariably causing much havoc and then moving on."

I have to admit, that sounds pretty good to me - not sure I want to remedy that situation. However, if you do, you'll find a random table of identities for a Boot Hill character. I dig the fact that female characters have a 2% chance to be nuns. I'd love to play a gunslinging nun. 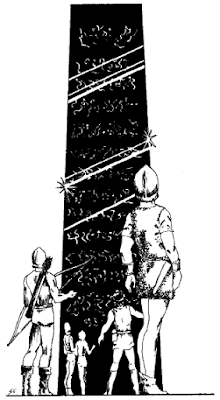 The feature of this issue is "The Temple of Poseidon" by Paul Reiche III. The intro has nothing to do with the adventure, but it does delve into TSR history ...

"I wrote The Temple of Poseidon early in the spring of 1980 as part of an application for employment at TSR Hobbies, Inc. Having grown tired of fourteen straight years of school, I decided to take some time off from college and work full-time for a change. The problem was where to find a job. I had already had several, all of which were boring or (as was with the case with piano moving) physically undesirable.

A year earlier, TSR had hired my good friend Erol Otus as a staff artist. After visiting Erol out in the chilly wastes of Wisconsin, and learning that—contrary to what I had heard—the men and women of TSR were not evil, hateful creatures, I decided that perhaps a job with TSR was the kind of change I was looking for. So with several years of playing experience and authorship of two fantasy roleplaying supplements under my belt (Booty and The Beasts and The Necromican co-authored with Mathias Genser and Erol Otus) I started work on the Temple of Poseidon."


He goes on to say the adventure was inspired by Lovecraft and CAS - and it's a great dungeon crawl. Well worth reading and running.

"Time and the way the party spends it plays an integral part in this adventure. Exactly 10 turns after the characters descend the spiral staircase and enter the alien base, the evil priests of Ythog Nthlei will succeed in freeing their master. The only way to prevent them from attaining their goal is to kill them before the end of 10 turns. If they succeed, Ythog Nthlei will instantly move to Room 31 with his treasure: The priests will remain in their room."


"Giants in the Earth", by Tom Moldvay, opens things up for contributions. So, no giants this time. Dang.

Time for some sage advice ...

Question: What happens when a cornered (as in a deep pit) undead creature is turned?

So basically, it's like the cleric telling the undead to go stand in the corner and think about what they're done.

And now we come to the comics, and Steve Swenston's Pinsom. 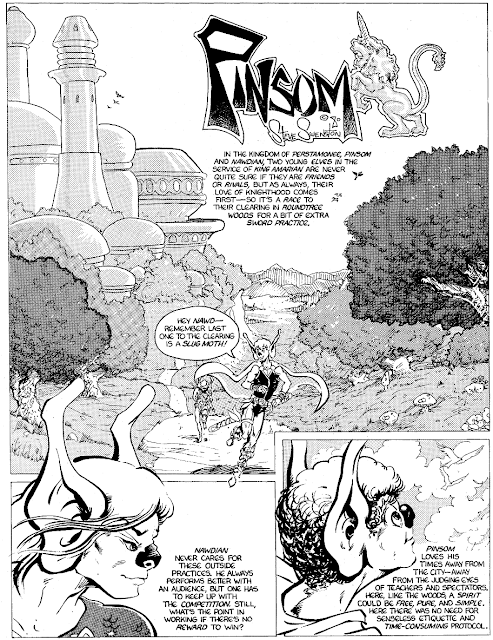 And so ends the chronicle of February 1981's Dragon Magazine. But what were those knuckleheads in the UK up to? 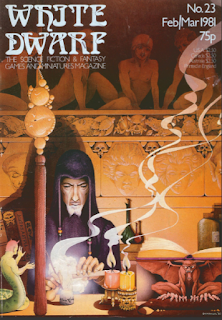 At a minimum, the White Dwarf cover for Feb/Mar 1981 (that would be #23) was putting off a very different vibe than The Dragon. It's definitely an image with which to conjure.

This issue of WD starts a series by Lewis Pulsipher, "An Introduction to Dungeons & Dragons". Good series, and worth the read for the newcomers to the hobby - although I've always thought learning to play these games is much better done by joining an existing group and playing. In the early days of the hobby, though, this wasn't always possible and many groups were learning as they went.

Next up is an interview with Marc Miller, covering his origins and the origins of Traveller. If you're a fan, you might want to give it a look. 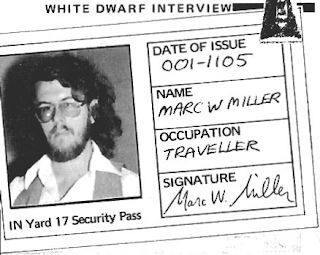 The "Fiend Factory" this issue has the Flymen by Daniel Collerton, with art by Russ Nicholson - great monsters, though they're only a half-inch tall. However, with a handy shrink ray, they could give a party of adventurers plenty of trouble as they look for a way to return to normal size.


Here are the Blood & Treasure stats, first for the tiny-sized fly men in a swarm, and then for the fly men as they would appear to shrunken adventurers: 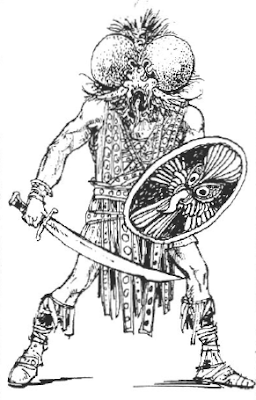 There are five fly mages per hive, and each has extra powers depending on his role. There is the Master Attack, Master Defense, Master Healer, Master Knowledge, Master Worshiper.

The article also includes info on other types of flymen, the Northflies and Sandflies. Awesome stuff - seek it out and use it, for crying out loud. The flymen would make an incredible side trek in a dungeon or wilderness. In fact, the issue includes "The Hive of the Hrrr'l", also by Daniel Collerton, so you're all set.

Also: The flymen's heads can be hollowed out and used as masks.

Spell Focus: A telescoping rod (costs 1,000 gp) that must be pushed in while the spell is being cast.

The White Dwarf isn't done yet - you also get a new class, The Elementalist by Stephen Bland, the Khazad-class Seeker Starship for Traveller by Roger E. Moore, and A Spellcaster's Guide to Arcane Power by Bill Milne. That last article involves a spell point system for spellcasting. There are also some keen magic items.

All in all, a really good issue of White Dwarf ... in fact, I give it the nod over The Dragon this time around.

Happy Easter folks!
Posted by John Matthew Stater at 10:14 AM