Just a lazy Saturday post today with a few preview locations from the next Og hex crawl in NOD 29. Pour yourself a drink and enjoy!

Morgor is a mining village of 400 lanky hill dwarves and flinty gnomes. The dwarves of Morgor are more lively than most due to the positive influence of the gnomes and their hand organs. The warriors of the village, 20 dwarves and gnomes, wear bulbous helms and coats of mail and carry military picks and light crossbows.

The village currently looks abandoned, for the people have had to withdraw into their mine. They have been terrorized for more than a week by a weird sorcerer called Tall Darrow. The countryside around the main village is populated by 3,200 dwarf and gnome farmers. Many of them have fled the area and are on their way as refugees to Azsor. Many others are hiding in cellars or caves in the wilderness.

Tall Darrow has pale, waxy skin spread over his tall, thin form. He is capable of replacing his head with one of six others, all of them being the preserved heads of ancient sorcerers, and each having their own set of magic spells that they know. Each morning, the sorcerer can remove one head and then attach a new one – this can only be done in the first rays of dawn, and the process takes 10 minutes during which the sorcerer can do nothing.

Morgor’s ruler is the Lady Ymarr, a rough and tumble hill dwarf war-maiden with a pet winter wolf she rescued as a cub. The wolf is growing impatient in the mine, and is threat-ening to return to its naturally evil form.

There exists in this hex a pleasant hollow surrounded by tulip trees. In the midst of this grove there is a silver tube that juts up from the ground. Should anyone drop a gemstone down this tube, they will hear a hollow, echoing voice ask “What need thou know, friend?”

At the moment, a storm giantess by the name of Avnell is consulting the subterranean oracle about whether her lover will ever return from Utt, the City of Giants located far to the north in the White Mountains. She is quite distraught, which explains the gloomy clouds and temperamental rains that plague this hex at the moment.

If adventurers will promise to journey north and find her lover, the erudite storm giant Jondr, she will promise them the moon and the stars.

A herd of shadow horses sweeps down from the hills at eventide, leaving crystal growths to grow behind them. These crystals last for 1d4 hours before they explode into a mist of negative energy that chokes and drains. The mist persists for 1d6 hours (or 1d6 turns if there is a strong wind, 10% chance). The crystals can be harvested and used to create magic items, but they drain 1 hit point (permanent) per day from any within 10 feet of them. The horses are heading towards the City of Sand and Stone [3403].

The Temple of Mental Fortitude is a strange place indeed. The “temple” consists of a thousand stone pillars of unknown height, emerging from a valley shrouded in chill mists. In the surrounding mountains dwell a flock of giant eagles. Seekers of enlightenment come to the lip of the valley and meditate for three days before holding up a golden offering to the giant eagles. If they are judged worthy, an eagle swoops down, grabs the monk with its talons (inflicting damage) and deposits them atop one of the icy pillars.

The pillars are about 10’ in diameter. There, the monk con-tinues his meditations for 14 days, eating nothing and hydrating himself on the ice that gathers on his pillar. This mortification of the flesh is intended to bring about enlightenment and mental fortitude. If they survive, they increase their Wisdom by 1d4, and reduce their Constitution by the same.

When a monk has finished his time on the pillar, he crawls to the edge of the pillar and leaps off. A giant eagle will either catch him and carry him back to the edge of the cliffs that ring the valley, or he plunges into the mists and is never seen or heard from again. 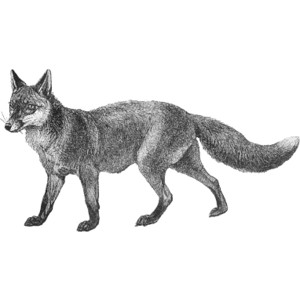 A crevice in this hex, narrow and spooky, hides a small temple dedicated to Ruch, the Fox Spirit of the Qum’al. The temple is carved into the red walls of the crevice, with a single small door flanked by bas-reliefs of fox women. The door opens to a tunnel entrance that goes back about 30’ into the cliffs, ending in a chamber 20’ in diameter with a 30’ domed ceiling.

The temple room is completely dark – magically dark – with a number of motes of light that resemble stars. These motes orbit the dome, moving slowly unless somebody attempts to grab one or interfere with one – then they scramble and swarm around the room at full speed.

Grabbing a mote (treat them as AC 25) causes a terrible burn (1d6 damage) and leaves a key-shaped imprint on their palms. If the key is made and one returns to the temple they will find it guarded by seven foxweres, lithe women wrapped in poly-chromatic veils that hide mithral mail shirts. They are armed two scimitars and can cast spells as 4th level druids.

In the floor of the temple there is a tiny hole, just big enough for a key. When a key created from an impression left by a mote is put in the hole and it is turned, the corresponding mote becomes larger as the key is turned, and becomes a portal into a vault buried deep beneath the ground.

These vaults belong to some of the greatest thieves in the world, and are guarded by death traps of their own devising. Here, they hid away their greatest treasure – their memories and true identities.

Have a groovy weekend. I'll be back tomorrow with a Dragon review (I hope).
Posted by John Matthew Stater at 4:28 PM