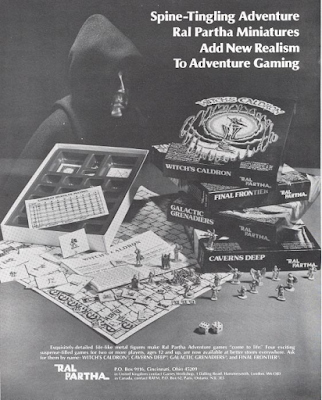 Just a little ditty inspired by a metallic mannequin in a robe I saw in a Ral Partha ad (right over there on the right).

I designed them to be an alternate low-level challenge for dungeons, or maybe an interesting planar civilization.

Immune to electricity and poison, resistance to cold, fire and edged weapons, no discernible anatomy

The metallic men are refined creatures of elemental earth. They look like humanoids composed of gleaming silver. Their skins are not fluid, per se’, but they move the way creatures of flesh and blood move. They have discernible mouths, eyes, and noses, and appear to breath (and can suffocate) and eat, though they do not sleep. Their food is usually iron-rich, and a draft of fresh blood (1 HD worth) can provide 1d4 points of healing in battle.

Metallic men are extremely logical, and masters of advanced mathematics (roll 5d4 for intelligence). They rarely speak, and when they do sound something like a fuzzy, scratchy drive-thru restaurant speaker. This, coupled with their reserved emotional state, leaves them rolling 3d4 for Charisma.

If struck by electricity, they can channel it into a bolt of lightning with a range of 60’ and dealing damage equal to the original source up to a maximum of 3 dice.

Metallic men are capable of forming their hands and upper arms into weapons. For all intents and purposes, a metallic man can form any sort of weapon it wishes. These pseudo-weapons deal damage as their normal counterparts, though they are somewhat clumsy (-1 to hit). They cannot be sundered - a sundering attack would be, in essence, a normal attack against the metallic man. Metallic men cannot form bucklers or shields from their arms/hands. Obviously, weapons so formed cannot be thrown; they can only be used for melee combat.

Metallic men live in colonies of 20-200 on the Elemental Earth plane, or of 10-40 on the material plane (usually in hiding). For each colony there is one golden metallic woman per 20 metallic men. Metallic women have high wisdom scores (roll 2d6+6) and act as conduits to the higher powers of elemental earth (commune once per week, but are stunned for 1d4+4 minutes after). Metallic man warriors carry footman’s maces and pellet bows (fire sling bullets for 1d4+1 damage instead of arrows). Most carry shields (AC +2).

Warriors are commanded by one decarch (HD 2+2) per 10 warriors and one centarch (HD 4+2) per 100. Armies over 100 are commanded by a fighter of level 1d6+3 or a fighter/scientist of level 1d6+2. They are sometimes mounted on battle platforms that look like round discs atop eight metal, spider-like legs. The riding disc is surrounded by a force field (AC +2, lesser globe of invulnerability).